Having opened on Thursday, the Jamnasium is now home to hundreds of musicians from across Metro Vancouver
May 11, 2018 3:06 PM By: John Kurucz 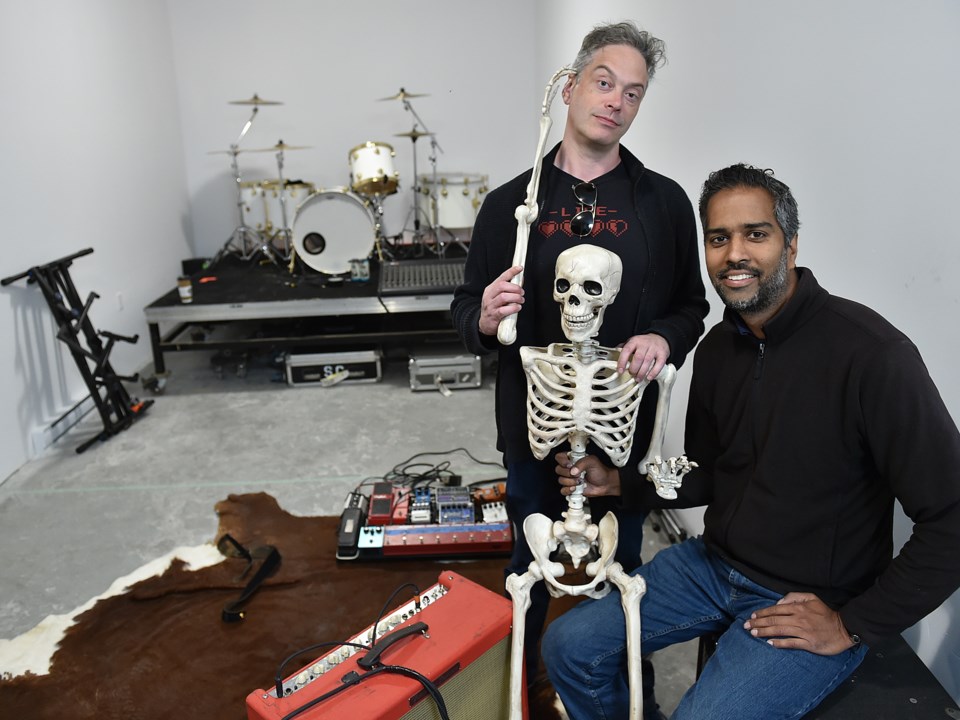 Suna Entertainment Group partners Rob Stewart and Amrit Maharaj in one of the rehearsal spaces at the newly-opened Jamnasium on Clark Drive.Dan Toulgoet

It’s taken what seems like a bureaucratic eternity, but Rob Stewart has built it and they are coming.

Stewart is the head honcho behind western Canada’s largest rehearsal space, the Jamnasium, on Clark Drive. It opened yesterday (Thursday, May 10), with minimal advertising or hype, and the uptick suggests none is needed.

The 12,000-square-foot facility was 90 per cent full on opening day, and will likely reach capacity by month’s end. It’s now home to hundreds of musicians from across Metro Vancouver spanning every conceivable type of music under the sun.

“People are super jazzed about this,” Stewart said. “You can see on Facebook, shots of guys in their new jamspace who are so stoked and that’s super pleasing.”

Located near the intersection of Clark Drive and William Street, the Jamnasium houses about 50 rooms — seven are hourly, while the rest are rented monthly. The rooms vary in size between 150 and 300 square feet, enough space for two or three bands to call home. Bands pay $4.50 per square foot for their rooms.

The Jamnasium is the largest dedicated music rehearsal space in Canada west of Toronto. The property formerly housed a dim sum factory, and has been completely overhauled to the point of making it one of the more functional and modern rehearsal facilities in the country.

Each room is equipped with air conditioning, alarms, wireless internet access and Roxul soundproofing material that’s both breathable and almost airtight. The use of Roxul makes it so 120 decibels in one room sounds like 20 decibels in the room next to it.

Stewart’s company, Suna Entertainment Group, now operates four rehearsal spaces across the region, three of which are clustered towards the north end of Clark Drive. The other facility is in New Westminster. Between the four, 84 monthly rooms house more than 1,000 musicians from across Metro Vancouver.

He’s effectively got a coup on the jamspace marketplace but doesn’t look at his contemporaries — Pandora’s Box, Renegade Productions or SoundHouse Studios — as competitors.

“We’re all servicing the same demographic and with everything set against us — the city trying to tear us apart, people in condos complaining about noise — there’s no need for any of us to tear each other apart,” he said. “If we can work together, then we should.”

In that spirit of solidarity, the Jamnasium obtained about $35,000 worth of gear from Sanctuary Studios after its closure last summer: amps, cabinets, drums, cymbals, thousands of guitar strings and other nuts and bolts.

That kind of teamwork making the dream work is central to the Suna story. Having operated jam spaces for close to a decade, Stewart surrounds himself with developers, realtors, architects, event planners and financial types. He’s able to uncover deals and negotiate long-term leases — 17 years in the case of the Jamnasium — in a landscape that’s seeing countless other arts groups flounder.

“I never wanted to do this for any other reason other than this needed to happen,” he said. “I’m a musician and I started doing this because I wanted to play more gigs and I wanted to be able to rehearse more and I couldn’t.”

Getting the doors open and the volume set to 11 has not come without challenges. The lease was signed in June 2017, though his architectural drawings and other specs took four months to be approved by the city. About $500,000 had been spent on the facility before it opened.

The final weeks leading up to opening day saw city inspectors interpreting building code specs differently — one inspector would approve the electrical, while another would return within days and poo poo what had already been signed off on.

“I don’t begrudge the city, but bureaucracy drives me f***ing insane, there’s no question,” Stewart said. “I think that’s just the nature of doing business here in the city. This has taken a tremendous amount of energy and personal sacrifice from my life. But we’re starting to turn the corner now. This is the big one.”

The Jamnasium is located at 1140 Clark Dr. Info is available online at facebook.com/SunaStudiosInc.