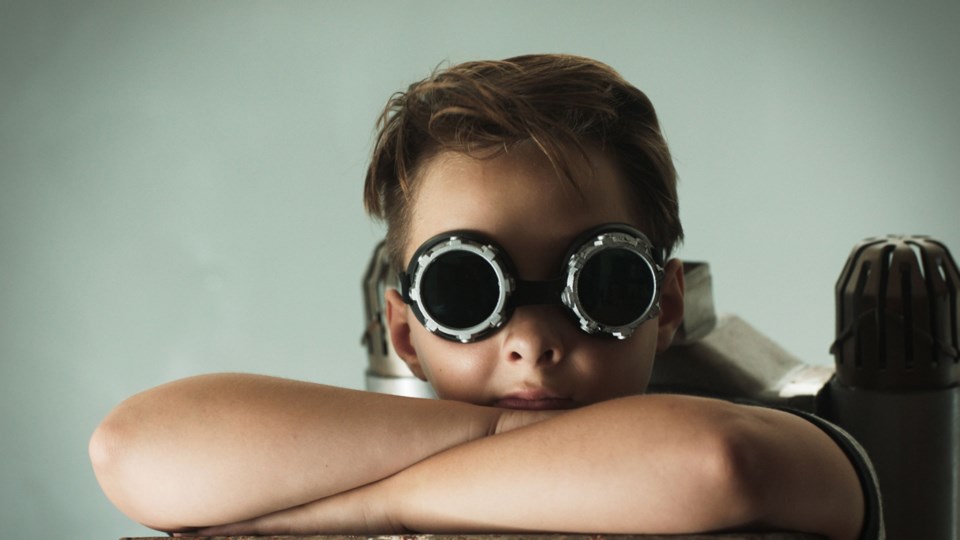 Milo is one of five kids profiled in a documentary short that will screen August 17 as part of the 2018 Vancouver Queer Film Festival.

At first glance, the five kids featured in Beauty don’t have a lot in common. They’re all different ages. They have different interests. Some have no siblings; one is a twin.

But Beauty – a documentary short from local director Christina Willings that makes its hometown debut at the 2018 Vancouver Queer Film Festival – demonstrates that first glances can be misleading, if not downright harmful.

Beauty’s five young subjects share a fierce determination to live their true gender identities, even if that means rejecting how the cisgender, patriarchal, binary-or-bust society tells them they should exist.

And that determination in the face of a society that needs to catch up is where Beauty’s beauty lies.

Beauty – which was produced by the National Film Board of Canada – invites its viewers into the lives of Bex, Lili, Fox, Tru, and Milo. These five gender creative kids are each uniquely engaged in shaping their ideas of what it means to be fully human in a culture that has long viewed gender in rigid, binary terms: male or female, with no room to maneuver beyond the identity we’re assigned at birth.

Of course, as Beauty illustrates, the gender identity we’re assigned at birth doesn’t always reflect who we actually are.

Typically, the process of living one’s true gender begins with the child themselves, says Willings in a recent phone interview – sometimes as young as two or three years old.

This was the case for most of the kids in the film, she adds.

“That they had such clarity so early, when most of us struggle for that kind of clarity about who we know ourselves to be internally, was incredibly impressive to me, and that they were supported by their families to truly be who they were, even though that was not always easy, and the families in the film have not found it easy, but they have showed up with love at the centre of all their decisions, I just really wanted to amplify that,” says Willings.

The filmmaker found her subjects with assistance from Vancouver psychologist Dr. Wallace Wong, as well as an organization serving gender creative kids in Montreal.

The process was slow and evolved organically, says Willings; once she’d been introduced to a family, she worked hard to earn their trust before there could be any possibility of filming.

“Some would say that documentary filmmaking is by its nature exploitative, [because] you’re capturing somebody’s story and exhibiting it, and [the families] wanted to understand what my perspective was, and I wholly respect that,” says Willings. “My process is very collaborative, and it’s important to me that the people who engage with me also benefit from the process.”

Which illustrates another commonality between the children in Beauty: each one wanted to be heard. “All of the kids in the film wanted to be witnessed on this level, to exist in this way in a larger sphere,” says Willings.

Thus, in Beauty, the kids drive the conversation, while their families keep to the sidelines.

They talk about bullies, and the anxiety that can come from using public bathrooms and going to school.

They talk about the fluid nature of gender, and how gender identity can ebb and flow. As Vancouver-based transgender youth advocate Tru Wilson explains in the film, the process of accepting her identity came in stages – from 30 per cent girl, to half and half, and finally, as she states, “Okay, I am 100 per cent girl… But I identify as a transgender girl.”

They expound on their hobbies, their dreams, and their deepest fears. (Lili’s include being laughed at, or mistaken for the wrong gender).

For Willings, the process of making Beauty “deepened my understanding of how important it is to allow kids to tell you who they are, and to really receive them,” she says. “Kids rarely really feel attended to in that way: where they can say, ‘This is who I am, this is how I experience myself,’ and for someone on the other side to be able to attend to them and say, ‘I hear you. You’re the expert on your experience; how can I support you to become more of who you are?’”

Beauty has been riding the festival circuit since premiering at the TIFF Kids International Film Festival in March. Willings says the most meaningful feedback came after a festival screening in Quebec.

“I had kids coming up to me, some of whom could speak, others who were dissolving into tears, and the message they had was, ‘I didn’t really know what was happening and I didn’t have any language for what I was experiencing before I saw your film, and now I have a sense of who I am and I have a way to talk about it, and I might even have a way forward,’” says Willings. “It’s the best response one could hope for.”