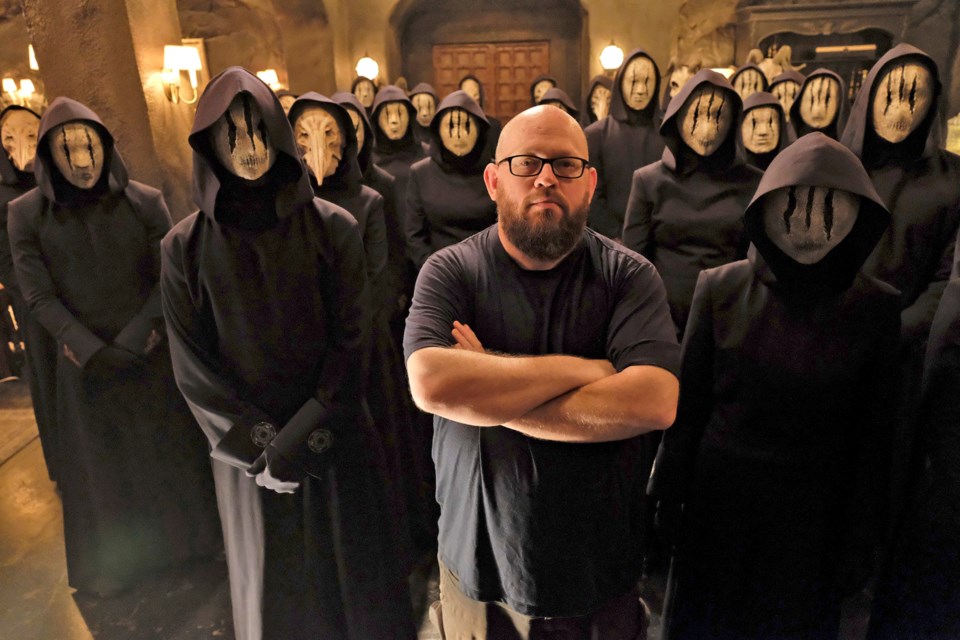 Vancouver-based screenwriter and showrunner Dennis Heaton digs deep into the world of secret societies in the Netflix series The Order.

Dennis Heaton learned a lot about secret societies when he was writing The Order, but his favourite societies don’t have Wikipedia entries or internet footprints.

“We’ll never know about the best secret societies,” says the Vancouver-based screenwriter and showrunner whose lengthy list of credits includes Motive,Call Me Fitz and Ghost Wars. “The Skull and Bones and the Illuminati have percolated to the surface, but I’m really curious about the ones that are out there that we haven’t heard about. They’re the ones that are winning the game at keeping it under wraps.”

Heaton’s latest project draws its inspiration from those unknown societies, and injects them with magic and werewolf lore.

The Order stars Jake Manley as Jack Morton, a university freshman intent on infiltrating the secret society that destroyed his mother — but in the process, he ends up joining a rival secret society completely by accident. No spoilers, but both societies engage in magic, mischief and murder. And because they’re populated by university students, they’re also rife with texting and beer pong and clumsy hook-ups.

The Order is equal parts funny and terrifying.

“I’ve always found horror and comedy to be two sides of the same coin when I’m writing,” says Heaton, noting that he drew inspiration from The Howling and An American Werewolf in London. “For me, they naturally go hand in hand. It’s not like I set out and go, ‘OK, I’m going to write a horror film and I need to make sure I get some jokes.’ There’s just a natural balance between horror and comedy when I’m writing something in the horror genre.”

Heaton and his Order writers were cognizant of the fact their viewers exist in a world that is already scary. “[With The Order], I think it’s less about trying to scare people in a scary world and more about trying to distract them so they can be entertained again for a while and have a little fun,” says Heaton.

WhileThe Order is fun for viewers all over the world, it’s arguably more fun for Vancouverites, given that much of the action was filmed at the University of British Columbia’s Point Grey campus. UBC provided the exterior shots for the fictional Belgrave University; the interiors were filmed at Riverview. The old hospital “has a whole educational building that had classrooms for training,” says Heaton. “For that, it was one-stop shopping. I appreciated it.”

The Order was dreamt up and fleshed out in a writers’ room, which is industry jargon for the physical space in which the showrunner and screenwriters develop plots and generate scripts.

Heaton — who is the president of the Writers Guild of Canada — describes his writers’ rooms as “a fusion between a confessional booth and An Evening at the Improv.”

“As a showrunner, it’s your responsibility to make sure you’re creating a space where writers feel safe to share their stories, because there really can be those days where you’re drilling down into stuff that you wouldn’t necessarily bring up in conversation with other people.”

In The Order’s writers’ room, Heaton and co. spoke freely about fear.

“When you’re dealing with stuff about what scares you, you end up telling each other a lot of nightmares and things that scare you and you lean into more primal fear stuff than you might if you’re doing a family relationship drama series,” says Heaton.

When it came time to film The Order, Heaton was more delighted than scared.

“I think I end up ruining more shots on my show than anybody else because I’ll be sitting behind the monitor laughing out loud at stuff, and oftentimes it’s not the stuff that’s supposed to be funny but it’s scary and I’m laughing because it’s so creepy! It makes me happy.”