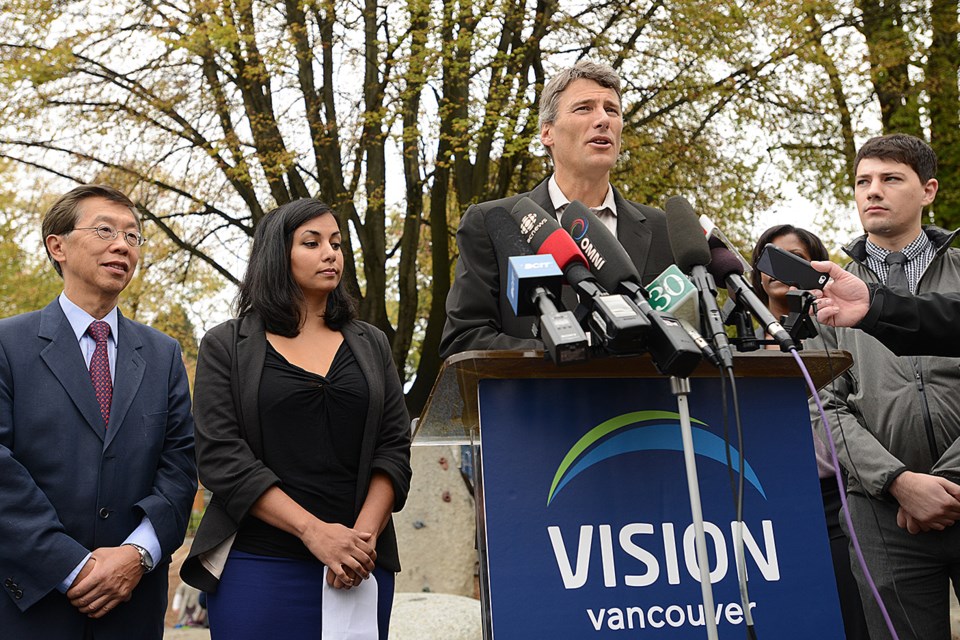 The signatories on forms for Mayor Gregor Robertson and candidates for city council, park board and school board are primarily from the ruling party’s backroom. None of the 2011 nominators, including Vision councillors, are listed on Robertson’s sheet signed Sept. 30.

Some of the names appearing on the 2014 form aren’t a surprise, such as party executive director Stepan Vdovine, former executive director Ian Baillie, Robertson’s chief of staff Mike Magee and policy and communications director Kevin Quinlan. Neither are Vision co-chairs Paul Nixey and Maria Dobrinskaya a surprise. Dobrinskaya was a Robertson aide during his one term as an NDP MLA and an aide in the Mayor’s Office.

Robertson’s wife Amy, from whom he is separated from, is listed on the form. So is Suzanne Hawkes, Magee’s wife and partner in the Convergence Communications campaigning and financing firm.

Public relations consultant Nixey is Vancouver Centre Liberal MP Hedy Fry’s former communications director. He is among a cluster of federal Liberals on Robertson’s form, including Young Liberals of Canada president Justin Kaiser and partner Braeden Caley, who is both an executive assistant to Robertson and president of the Liberal Party of Canada in B.C. Vision director Brittney Kerr is B.C. policy chair for the federal Liberals and a provincially registered lobbyist for the controversial Uber taxi alternative and the B.C. Salmon Farmers Association. Joining them are field Liberal organizer Paul Hershaw and Vancouver Centre Liberal riding president Jody Jollimore.

The most prominent NDP name is Jan O’Brien, who quit as the party’s provincial secretary in 2013. O’Brien chairs the Vancity board of directors and is married to Vision Vancouver Coun. Geoff Meggs. Veteran Vision strategist Mira Oreck spoke at the 2013 B.C. NDP convention about her role in campaigning for U.S. president Barack Obama’s 2012 re-election.

Other signatories include Jonathan Bleackley and David Smith, executives of Vision’s research and polling company Stratcom, and Lesli Boldt, whose Boldt Communications public relations firm is located in the Stratcom office.

Another Robertson nominator, Tory Pearson, was a Vision fundraiser in 2011, but is now Hootsuite’s government sales specialist. The social media analytics and marketing company hosted a Robertson campaign event in 2011 and moved into a city-owned building in 2012.

According to nominator Duncan Wlodarczak’s LinkedIn page, he was a community engagement officer from November 2012 to September 2013 for Ivanhoe Cambridge’s Oakridge Centre redevelopment, which coincided with his April 2012 to January 2014 post on the city’s Development Permit Board Advisory Panel. In a document promoting Westbank Development’s Vancouver House, Wlodarczak was acknowledged under the heading of the Pottinger and Associates development lobbying company.

While party bagman Joel Solomon is not a signatory in 2014, former Tides Canada and Renewal Partners executive Martha Burton is. Burton, Jollimore, Kerr, Public Health Agency of Canada consultant Sheena Sargeant and Sustainable SFU executive director Michael Soron are both members of the Vision board and nominators.

Nominations closed Oct. 10. Challenges are allowed until Oct. 14 at 4 p.m. and withdrawals until Oct. 17.