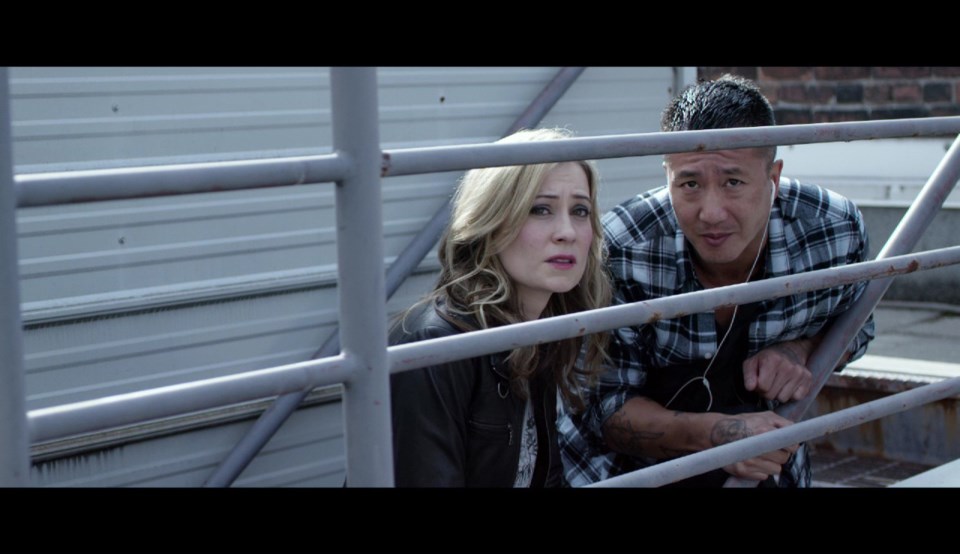 Jacquie Gould was determined to make a short film about the Downtown Eastside without exploiting the people who live there.

It might seem like that should just go without saying, but there’s a long history of productions rolling into the troubled neighborhood and giving little thought to its residents, according to Gould.

“I’ve been working in the film business for 28 years, so I’ve shot down there a lot,” says the veteran writer and director in a recent phone interview. “You go in there, and you work, and then you leave.”

From the get-go, Gould intended for her narrative short film – Victory Square – to be different: to showcase the humanity of the DTES community, and compel people to look beyond the damaging stereotypes associated with the term “addict.”

“We don’t even see them as people anymore,” says Gould. “I want people to see how easy it is to become that, and how hard it is, once your poor brain is addicted to these drugs, to get out of it.”

For Gould, Victory Square’s narrative arc is deeply personal. Her grandfather died from an opium overdose. Her niece, Ashley, is currently fighting her own battle with addiction in the DTES.

It was because of Ashley that Gould ended up casting her lens on the DTES in the first place. When her niece went missing three years ago, Gould reached out to a group of police officers she knew who worked with troubled youth in the area. The officers helped Gould locate Ashley, and opened Gould’s eyes to the realities of life in the DTES: homelessness, addiction, mental illness, gentrification, kindness, and community spirit.

Thus, Victory Square was born. The short follows a newbie officer (portrayed by Camille Sullivan) whose rotation takes her to the DTES. Terry Chen (Strange Empire; Continuum) plays a plainclothes officer with years of experience working in the turbulent community. David Cubitt and Maddie Phillips portray residents whose paths intersect with the two cops; Gould’s niece was the inspiration for Phillips’ character.

Everyone else you see in Victory Square is a DTES resident. Gould credits DTES resident and photographer Donovan Mahoney for liaising with the community and shooting “real footage of real people with real respect.”

“We didn’t want to go in and shove cameras in people’s faces, because to me that would be so disrespectful,” says Gould. Instead, Mahoney – a yoga teacher and prolific Instagrammer whose images have been featured on Huffington Post – asked “every single person, ‘Can I take your picture? We want to put it in a movie,’ and all they asked for was either a cigarette or a toonie,” says Gould. “Really, all they want is respect. They want people to look them in the eyes and see them as a human being.”

Gould and co. filmed the majority of Victory Square in a DTES alleyway and on a nearby rooftop. Amazingly, they spent only a handful of hours in the titular square.

“In Victory Square, we actually started at 6am, and we only got 13 takes, and it was never quite perfect, but then we had to stop because we were in [the residents’] way, and they were telling us to ‘fuck off,’ and we said, ‘Sure, we’re totally getting out of your way,’” says Gould. “It was that balance of getting what we needed but also respecting that this is their space. We scheduled it that way. We knew we had to work around these issues.”

Victory Square scooped up seven nominations for 2016 Leo Awards, including Best Short Drama, Best Direction for Gould, and Best Performance nods for Chen and Sullivan (the latter of whom is also nominated for Best Performance by a Female in a Motion Picture for The Birdwatcher).

Gould is currently developing Victory Square for television. “I want to make Canadian television shows,” says Gould, whose extensive list of credits includes the critically-acclaimed Strange Empire, Smallville, Godiva’s, Snow Falling on Cedars, and Alive. “My goal is to shoot and work here and hire everyone that I’ve ever worked with. We have such a vast resource of stories, and I want Vancouver to start playing Vancouver for Vancouver.”

As for Victory Square, she’d like its audiences to ruminate on the thin line that separates a mythical “us” from a mythical “them.” “Anything could happen to any one of us that just makes us unable to cope in life, and you go from having a few drinks a day to a little bit of a prescription drug habit to all of a sudden, your whole life is out of control,” says Gould.

• The 2016 Leo Awards will be handed out on June 4 and June 5. Reel People will live-tweet the three ceremonies. Follow @sabrinarmf for the tweets, and visit Westender.com for next-day results.