Wim Blom: The beauty of stillness

At first glance, everything about Wim Bloms paintings seems so simple: straight, sharp lines; easily identifiable objects a table, a bowl, a bunch of leeks; bold, well-defined colours. Theres realism at play and but its not an end unto itself.
Aug 28, 2013 9:00 PM By: Vancouver Courier Staff 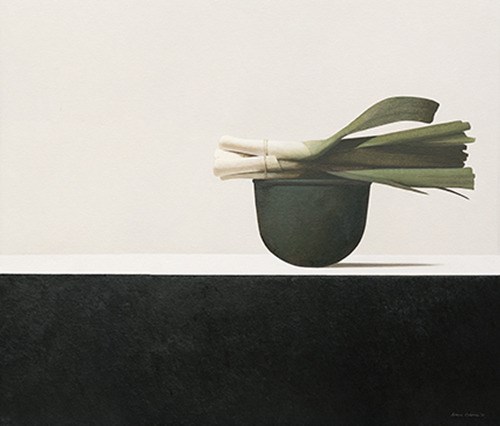 At first glance, everything about Wim Bloms paintings seems so simple: straight, sharp lines; easily identifiable objects a table, a bowl, a bunch of leeks; bold, well-defined colours. Theres realism at play and but its not an end unto itself.

And then you start thinking about the feelings the paintings induce: inner stillness; a calming interlude in a busy day; a journey to a place and time you yearn for without knowing where those yearnings come from.

How on earth can a bunch of leeks resting atop a bowl evoke such a sense of grace?

Well, its not by accident. Blom, a former National Gallery of Canada curator who now lives on Salt Spring Island, knew exactly what he was doing when, over the past five years, he started painting and drawing the 21 pieces that compose his upcoming exhibit at the Ian Tan Gallery. Each piece is planned to exacting detail before he even picks up his paintbrush. Once hes thought everything out, he changes nothing.

When I was 50, I knew where I was going [with my paintings], the 86-year-old says in a telephone interview. With age, even though your experiences have piled up, you can also cast aside a lot of what youve absorbed, focusing on what you like. I started simplifying things. I knew where I wanted to go and I concentrated on the technique to achieve this...

Im very observant and I look things through, he says. That bunch of leeks on the bowl he bought when he lived in Spain? You know theyre resting on a table but he doesnt need to paint the cracks on the table, which becomes a block of pure colour a presence thats felt, not shown. Yet in another painting, Table in the Sunlight, the interplay of light and shadow on the tables contours give it as much life as the objects hes placed on top of it.

And yet its not still life for the sake of still life. A leek is chosen because of its wonderful, clean, simple shape.

You must always have something a little different in a painting, otherwise it can be ordinary and overlooked, he says, adding later, Its got to be well thought out and well felt to be convincing.

The brochure for the exhibit includes a journal entry from October, 1998: In a painting, I look for a civilized mind at work. The result should reflect carefully selected contents, be well-finished, revealing acute observation, taste, sensitivity and impact. If these qualities are badly balanced, or any of them absent, the end product is invariably second rate or worse.

You have to hear Blom speak to know that its with confidence, not ego, when he says things such as the way Ive selected things has made [the painting] better. His paintings resonate with people, so much so that when they buy one, they tend to want to keep it; they enjoy having it around and never tire of its image. Very few of his pieces come up for auction.

As one of his few concessions to age, Blom is going to take some time off after the Vancouver exhibit. In the first six months of this year, he finished one painting, started another one and has some detailing to do on a third.

I only manage five or six paintings a year, he says, oblivious to the fact that many people his age have done away with to-do lists. The days of painting from nine to five and dealing with three galleries at the same time are over. But I always have to have one or two on the go.

The Wim Blom exhibit is at Ian Tan Gallery, 2202 Granville, from Sept. 7 to Oct. 3, with previews already underway. Theres a full catalogue on IanTanGallery.com.