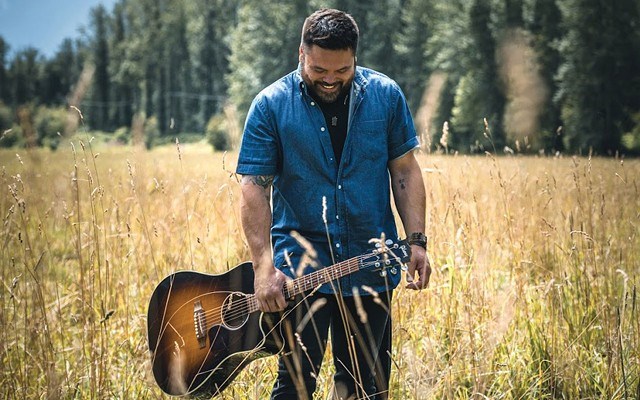 "The drive has never stopped," the Vancouver musician says. "Since I was a kid, it's honestly all I ever wanted to do."

To clarify, Gavigan's money-making "day job" is performing solo... a lot. After those gigs wrap up, he focuses on his band, Best Night Ever, which plays a mix of pop, soul and R&B.

"I'm not a massive touring musician," he says. "But I play 230-something shows a year and make a really good living playing music."

While he performs original songs, and toned-down versions from his former hard-rock band The Turn, he usually sticks to way-below-the-radar covers like The Marcus King Band and Childish Gambino.

"I pick stuff I like," Gavigan says. "A lot of the time it's not Top 40 or super familiar to people."

Travelling up to Whistler — which he called home for about two years after high school — around two to three times a month, usually to play the Mallard Lounge, he's also happy to field requests.

"[Requests are] good. It means they're engaged, they want to hear what you're doing," he says. "I'm happy to oblige, if I know the song."

If he doesn't, he'll sometimes opt to look it up during the break and give it a whirl when he returns.

"People are really appreciative if you're giving it a shot," he adds. "It's fun though for me too... I've got a few hundred songs in my set."

Gavigan's passion for music dates back to when he was six years old and his dad directed the church choir. "I would sit in the back and pretend I knew how to play drums and sing along," he says. "I fell in love with it and started my first lip sync band."

His aforementioned rock group, The Turn, won the coveted 99.3 CFOX Seeds (awarded each year to an unsigned local band) in 2005, which launched their career. But after eight years of touring, opening for some of their favourite bands and releasing an album, that project fizzled.

Gavigan decided to strike out on his own. "I played drums in another band for a couple of years," he says. "I had been the singer, guitar player, and principle songwriter; I wanted to do something different. It was a lot of fun. I needed to change the pace a bit."

For seven years he also co-ran a recording studio in Langley with a friend, which helped further entrench him in the music community — and even led to a surprising celebrity encounter.

"I got to work with a lot of awesome local bands — and had [famed life coach] Tony Robbins come through and record one of his motivational CDs," Gavigan says. "He's an intense dude."

All the while, he was also stepping in as a session musician and to play occasional gigs with various Vancouver bands.

"There's a solid community of musicians who work together, write together, gig together. All these events bands, they're populated by the same 100 people. It's just mix-and-match of who's working that night. But for freelancers, we really have to have our hands in everything. That's how I find we stay busy and fed and pay our mortgages," Gavigan says.

That also led to one his latest projects — a forthcoming solo album that combines country, pop and soul.

"When I started working with Dan [Swinimer]—he's a producer/songwriter [and 2018 CCMA producer of the year nominee], he would get me to sing his demos," Gavigan says.

"I would come in and he'd hire me to sing his demos. He loved the marriage of soul and pop and new country. We started writing songs and that's what came out."

For more, visit patrickgavigan.com or check out his band Best Night Ever at bestnighteverband.com.