Passenger Transportation Board cites concerns over company’s business model among reasons to refuse licence
Feb 11, 2020 10:32 AM By: Tyler Orton 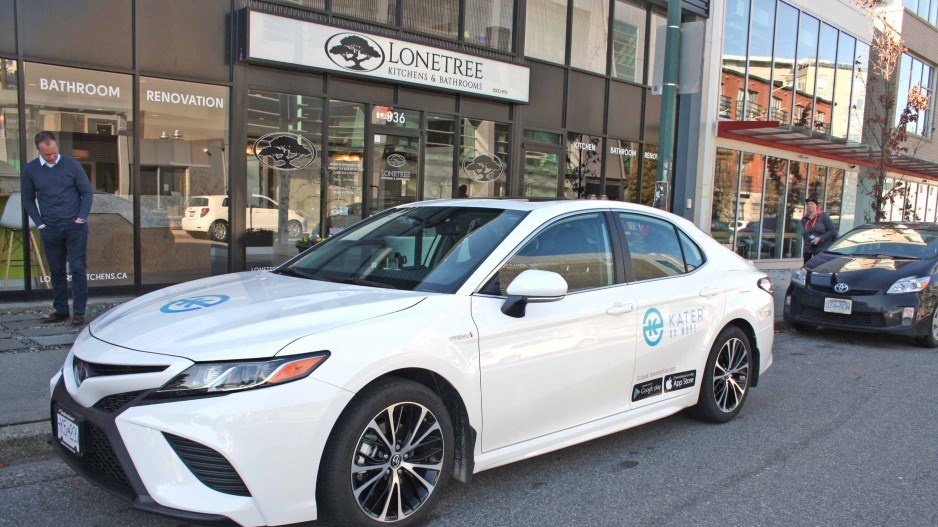 Free swag, local-celebrity passengers and a kickoff at a brewery marked the arrival of Uber Technologies Inc. and Lyft Inc. late last month in Metro Vancouver.

Amid the fanfare, however, B.C. companies vying to offer regulated ride-hailing services in the region remained stuck in neutral with the major stumbling block for one service appearing to be the provincial regulator’s concerns about its business model.

The Passenger Transportation Board (PTB) had taken issue with ReRyde Technologies Inc.’s access to drivers and ability to manage vehicles in its denial of an operating licence.

But in its denial of Kater Technologies Inc.’s application, the PTB highlighted the B.C. company’s business model, describing it as “incongruous and unrealistic” and calling its revenue projections “overly optimistic.”

“If there are other entrants into the market, Kater’s proposed rate structure (e.g. charging rates close to those of taxis) will put it at a disadvantage in acquiring market share, rendering its revenue projections even more unrealistic,” the PTB said in its decision.

But is it a regulator’s role to determine whether a company has the entrepreneurial chops to succeed before getting a licence to operate?

He said the licensing process can often become complicated as regulators can reject applications for a business licence if they have reasonable grounds.

“Now it doesn’t say what ‘reasonable grounds’ is — that’s the thing. And this to me is not reasonable,” Kozhikode said, citing Uber’s long history of unprofitability.

“Who’s to say what is a sound business plan? It’s not like they’re asking money from the regulator.”

PTB director Trevor Paul told Business in Vancouver in an email it would be “inappropriate for the Board to provide a comment at this time” while it reviews other ride-hailing applications.

The PTB described its mandate in a statement to BIV as making “evidence-based licensing decisions under a transparent process prescribed by legislation.”

Kater, meanwhile, has drawn criticism in the past for its close links to the taxi industry — widely perceived as a way the industry could remain entrenched in the transportation sector as regulated ride-hailing made its way into B.C.

The company began offering transportation services in spring 2019 after securing 140 taxi licences from the Vancouver Taxi Association (VTA) for its own fleet of vehicles.

Kater allowed passengers to order rides through its app and pay the same rates they would for a taxi.

In return for the taxi licences, the VTA received 20 per cent of Kater’s profits.

The company suspended those operations in December as it awaited word on a traditional ride-hailing licence from the PTB.

Kater has not been in communication with its drivers since then and laid off a portion of its engineering team following the PTB’s rejection. A spokeswoman said Kater CEO Scott Larson was not available for an interview while the company considers its next steps.

But Kozhikode said he believes the company should appeal the decision.

“The appeal should go through easily because I don’t see any valid grounds for rejection in this particular scenario,” he said. “The market is going to determine if the business plan is sound or weak.”