From trauma to recovery, Geri Bemister uses her life’s journey to teach others

Geri Bemister is the 2019 Courage To Come Back recipient in the addictions category
Mar 21, 2019 5:00 AM By: Michael Kissinger 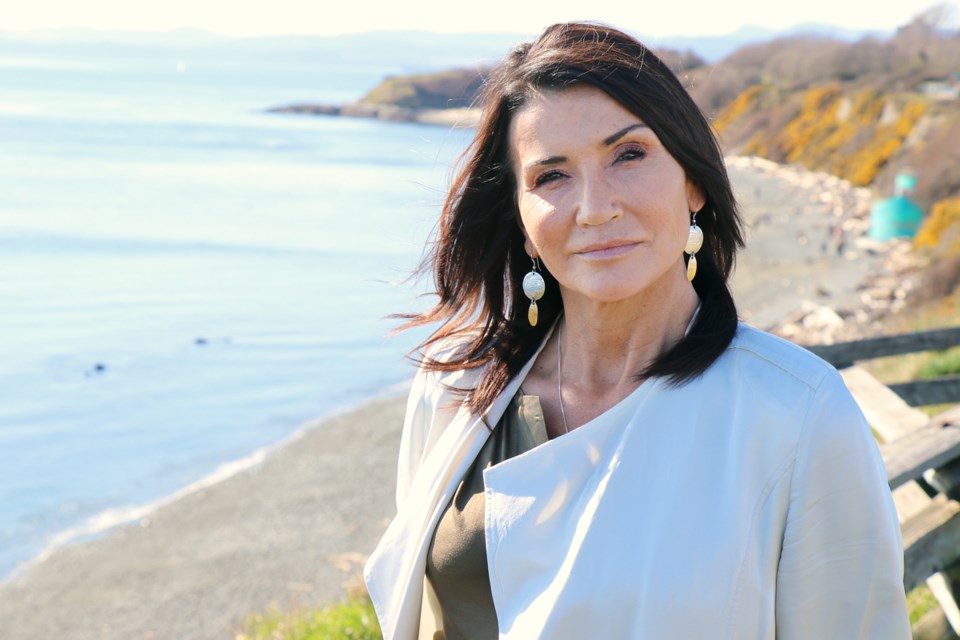 Behavioural scientist, criminology professor, addictions counsellor and interventionist Geri Bemister is this year’s recipient of the Courage to Come Back Award in the addictions category. Photo Michael Kissinger

The windmill pitch is one of the more difficult movements in sport to pull off with any kind of effectiveness. To the untrained eye, the pitcher’s movements are fluid and fierce, masking the series of components that work in tandem with one another. If one part of the pitch’s mechanics is askew or neglected, it can throw everything else off.

It was a pitch Geri Bemister mastered as a teenager.

Growing up in Langford outside of Victoria, she practised windmill pitches with her father 100 times a day, every day. She was a star pitcher on her fastball team, which competed regularly in the provincial championships. She even trained with the national team.

Fastball was her sport among several she excelled at. It was also her refuge. It was where she could turn off her brain for a few hours and exist in the moment, away from racket, away from the anger, away from the trauma of being sexually abused from the age of five to 13 by trusted relatives.

“Softball gave me enough dopamine, enough stimuli, enough of a rush to kill the feelings,” says Bemister. “And I was good enough at it that I could be a star, which provided me with a sense of belonging. It gave me what I didn’t form normally. With the abuse, it didn’t give me the ability to form healthy self-esteem, healthy trust in the world. Your decision gets a little skewed, and I think baseball was my attempt to normalize my life.”

But there was nothing normal about Bemister’s life. In addition to doing LSD every weekend, regularly smoking pot and drinking to excess, she lost touch with her old friends and found new ones who shared her appetite for an array of drugs and increasing criminality.

“It seemed pretty normal at the time to engage in drugs and alcohol. There was a lot of parties. What wasn’t normal was I continued to use when everybody went to college and to work and starting having lives that didn’t look anything like mine.”

There were offers of scholarships that went away, opportunities “that never really turned into anything” because she was more interested in partying. At one point, Bemister recalls, she showed up at the ball field intoxicated before an important game. “It was dumb. I was going to tell everyone the big f-you and they were looking at me like I was crazy,” she says. “That’s pretty much where everything went downhill. My family had broken down by that time. I went off the rails pretty hard.”

For Bemister, going off the rails meant never being sober and seeking out social circles that revolved around doing drugs, dealing drugs and committing crime.

“Anytime I met an adverse opinion about my lifestyle, that person would be cut out, and I would seek lower and lower kinds of companionship and circles. I just wanted to revolve and live in places where my behaviour was acceptable.”

Things temporarily came to a crashing halt, literally, when Bemister, a pregnant girlfriend and “some loser with a record a mile long” robbed a drug store, stole a car and crashed into another vehicle when Bemister passed out at the wheel.

She was sent to the women’s unit of the notorious Oakalla Prison, and at 19 was the youngest female in a federal penitentiary at the time.

After making a plea deal, there were attempts at normalcy — marriage, employment, a step-daughter. But there was always the drugs, the repressed trauma, the anger, the delusion that she knew what she was doing and could handle what life threw at her, be it a failed marriage or the inability to hold down a job or care for her step-daughter.

By her early 30s, Bemister could no longer drink because her liver was shutting down. Cocaine abuse graduated to heroin addiction, and her weight withered to 97 pounds.

That’s when her mother and sister showed up at her home with a pen and paper. They told her to write down the names of whom she wanted at her funeral. It caught her off guard, and something shifted.

“That was the real piece for me that led me to realize, ‘Oh my god, this is where my life is at and I don’t know how I got here.’ It was really that profound a statement that allowed some clarity to seep in when I was really mentally unwell.”

Like sports and school, Bemister excelled at recovery. But with sobriety also came some harsh realizations and difficult truths she had largely ignored under the numbness of drugs.

“In the beginning of recovery, it was great. I was helping. I went back to school, I was doing great things with my life — life was getting good really quickly… But once that kind of levelled off, there was this other layer of stuff I had to deal with once I was becoming more educated about my illness, my trauma, and doing some of the work around my trauma.”

On top of that, Bemister was diagnosed with cancer while in treatment, and eventually had both her breasts removed. While she admits the loss challenged her sobriety, she remained motivated and continued to seek help and educate herself.

As part of her journey, Bemister began to reconnect with her First Nations heritage — something that was never part of her upbringing. She researched and traced her ancestry to the Siksika Nation from the Blackfoot Confederacy and reached out to elders and people in ceremony who helped her reconnect with relatives.

“It wasn’t something people were proud of in my family. There wasn’t a lot of information. So it’s been a journey for me just to get connected and then start my own understanding of what our history is.”

She adds, “Living with a true understanding of spirituality as our First Nations people understand it is absolutely critical to where I’m at now and where I want to go with my life.”

Today, at 49, Bemister is a behavioural scientist, a business owner, an addictions counsellor and a former director of operations at the Sheldon Kennedy Child Advocacy Centre in Calgary. She’s studied the criminal justice system in five different countries, and is currently a faculty member in the department of Criminology at Vancouver Island University, a professor within the Department of Criminology at North Island College in Courtenay and an interventionist on the TV series Intervention Canada.

Although her life experience gives Bemister a unique and informed perspective that she shares freely with her students, colleagues and clients, she says she’s still learning to get comfortable with the next stage of her life, particularly as she receives the Courage To Come Back Award in the Addictions category, April 24 at the Vancouver Convention Centre.

“It’s hard,” she says. “It’s super meaningful, but it’s definitely hard to take on that responsibility… It’s like being a teacher — it’s not about me. It’s about something bigger.”

Despite her new role, she says what motivates her remains the same — being the person she never had in her own life.