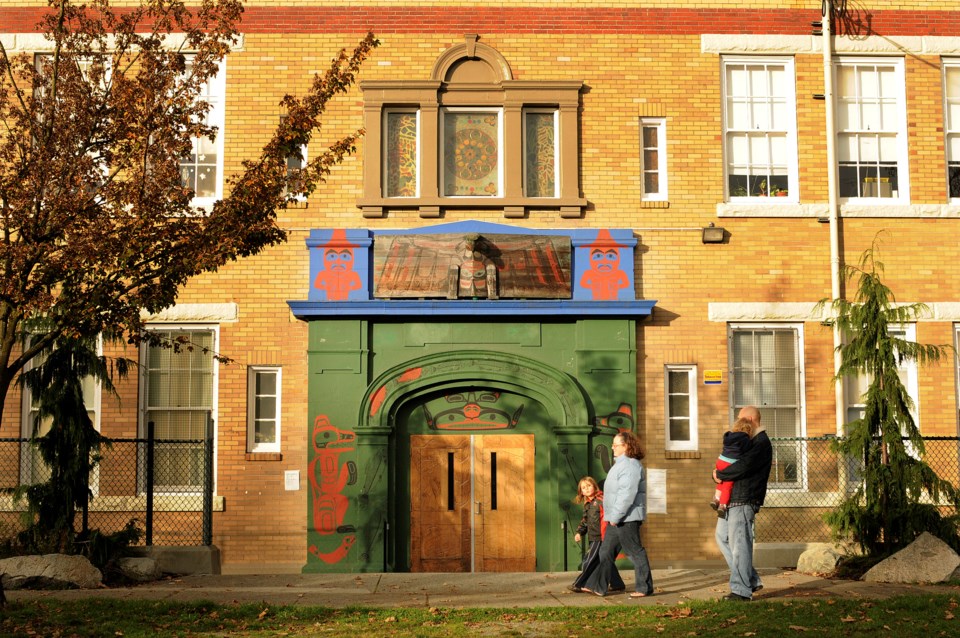 Sir William Macdonald elementary was listed in a provincial government-commissioned study by Ernst and Young earlier this year as one of a number of Vancouver schools that should be sold off in order to save the Vancouver School Board some money. Photo Dan Toulgoet

Vancouver’s first aboriginal focused school has been saved, at least for the time being.

Sir William Macdonald elementary, at the corner of Victoria Drive and Hastings Street was listed in a provincial government commissioned study by Ernst and Young earlier this year as one of a number of Vancouver schools that should be sold off in order to save the Vancouver School Board some money.

The decision was made on the basis of the Eastside school’s extremely low enrolment, some 70 students with a capacity for hundreds more. There was also the fact that, like many Vancouver schools, it is in need of seismic upgrading to make it safe in the event of an earthquake.

Back in 2010 when Vision trustees controlled the majority on the school board, including the first aboriginal trustee Ken Clement, a plan was developed to create a public school with an aboriginal focus. It was part of a strategy to improve aboriginal graduation rates.

While the school program, which was initiated in 2012, was open to all students, its mission according to the school’s website reads:

“Consistent with Aboriginal worldviews, the Aboriginal Focus and Macdonald Elementary School fosters literate, numerate and confident learners with the skills, knowledge and attitudes to be effective stewards of the land and waters of British Columbia.”

The school began with classes for kindergarten and Grade 1 and has added another grade or so each year.

Initially, there was no organized parent group supporting the program at the school. That has now changed. There is an active group that last spring made its concerns known when it saw the report that the school was up for disposal.

One parent, Michelle Buckman, who attended a school board meeting Monday night, explained to me that the struggle to build enrolment at the school is in part due to a reluctance of parents to enroll their kids in a school that may be slated for sale. There is also reluctance in the aboriginal community, given the residential school experience, to engage with the education system at all.

Following meetings with a number of the trustees, the parents had three proposals: Guarantee the school won’t be closed for a significant period of time; pitch the province to speed up the seismic upgrading; and change the name of the school to honour the fact that it is on unceded Coast Salish Territory. (The school is currently named after Sir William Macdonald, a man who was in his lifetime a philanthropist who supported educational endeavors but who made his fortune selling tobacco.)

Those requests were the genesis of the series of motions Monday night brought forward by Vision school board trustee Patti Bacchus. She was supported by her three Vision colleagues and the balance of power was tipped by Green party trustee Janet Fraser, leaving to NPA trustees to oppose it in vain.

It may also cause the NPA to question her loyalty. Since the last election when she was elected to the board, she has steadfastly supported the NPA in the appointment of the board chair while rebuffing two attempts by Vision to put Bacchus, the former chair, back in that position.

While the NPA did support setting up a committee to consider a name change Monday night, they did not support asking the province to make the seismic upgrade a priority, nor were they willing to approve a moratorium (to the year 2020) on closing the school.

Their principal argument was: What about other schools on the Ernst and Young hit list? Shouldn’t all parents and students be treated equally and have their schools protected?

The response was that this population group should be treated “equitably,” which is different from equal. Bacchus cited the recently concluded Truth and Reconciliation Commission. And she noted the disparity of educational outcomes between aboriginal groups and the rest of the population in the school system.

This justified putting the aboriginal focused program and the need to preserve this particular school — in spite of its meagre enrolment — ahead of the rest of the schools in the system.

It was Vision trustee Joy Alexander in supporting the motions put forward by Bacchus, who said, “If this school doesn’t succeed, we don’t want it to be because of something we didn’t do.”

Note: This story has been corrected since first posted.