Analysis: Why Mayor Robertson changed his mind about seeking re-election 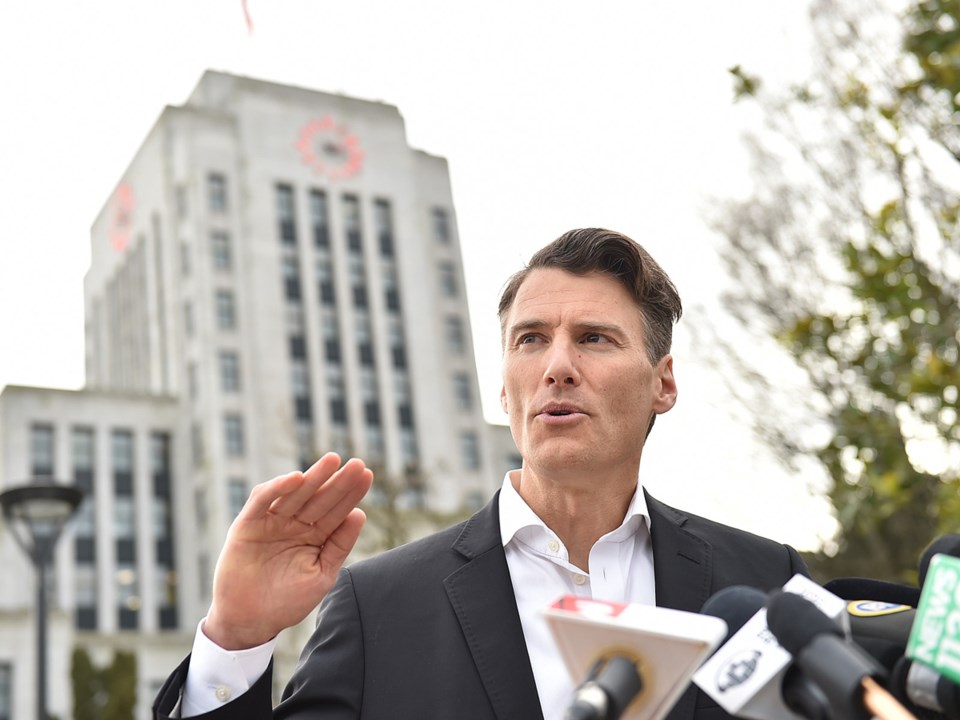 Mayor Gregor Robertson announced Wednesday that he will not seek a fourth term as mayor. Photo Dan Toulgoet

You've heard the news by now — the young, progressive mayoral candidate Vancouverites came to know in 2008, and liked enough to elect that fall and return to office in two subsequent elections, will not attempt to extend his winning streak this year.

Gregor Robertson, who will turn 54 in September and end a 10-year run as mayor, conceded Wednesday that his family got to him.

That would be his mom, his three adult children and foster son, whom he spent time with in Tofino and the Okanagan over the Christmas holidays.

His close friends weighed in, too.

They said: we miss you, you've accomplished a lot and, besides, you've been a politician since 2005 when you were elected the NDP MLA for Vancouver-Fairview until now as mayor.

Isn't it time to retire from politics?

So when Robertson returned home to his West End apartment, he sat down to consider those conversations and put his decision on a page. Then, as councillors Andrea Reimer and George Affleck did in recent months, he posted on Facebook what he wrote.

"Today, I announce one of the hardest decisions of my life...," he began.

And there it was — the Robertson who repeatedly told media over the last year that he would run again in the October civic election had changed his mind. The face of the city, the face and brand of Vision Vancouver for almost a decade was done.

On the surface, yes, and it is an accepted fact that such news will take some time to sink in for many residents, media and politics junkies  — that the city's biggest booster will soon no longer be a bike-riding, green-preaching, backyard chicken-supporting, reconciliation-seeking guy with affordability, homelessness and opioid crises on his hands.

"Something shifted for me that surprised me," he told me in an interview from his office Wednesday. "It came up in conversations, and I had time on my own to think about it and consider what was next for me. I felt it was time."

If you take Robertson at his word, then you have to believe him when he says his decision had nothing to do with a series of tide-turning events for him and his party that occurred over the last six months.

It began with his longtime friend and council mate, Geoff Meggs, resigning in the summer to take a job as chief of staff to Premier John Horgan.

Then along came the provincial government to announce that parties such as Vision Vancouver can no longer rely on the millions of dollars it receives from developers and unions to run election campaigns.

To close out the year, Robertson's position as head of the mayors' council on regional transportation was taken from him. None of this fazed him.

Besides, he said, Vision has called for campaign finance reform, political parties evolve and people move on. And, no, there was no pressure from the party to step aside.

"Recent events were actually motivating me to want to run again, to keep things solid," he said. "But the current team has had a good, long run in elected office and working together, so some change is expected

An NPA insider, Patrick O'Connor, brought up an interesting point on Twitter that I failed to address with the mayor: Robertson's departure comes at a time when the government in Victoria is loaded with Vision-friendly people, namely the premier who issued a short statement Wednesday calling the mayor a "trusted colleague" and "valued partner as we work with local governments to make life better for people."

'War on the poor'

During his time as mayor, Robertson and his Vision councillors made a sport of criticizing the former B.C. Liberal-led provincial government.

It got to a point where the mayor accused the government of waging a "war on the poor "— that Christy Clark and others weren't doing enough to address affordable housing, homelessness and the opioid crisis.

So why leave now?

That same observation of Vision having friends in important places can be made of the mayor's relationship — bromance, if you like — with Prime Minister Justin Trudeau, who took to Twitter Wednesday to thank Robertson for his "friendship, partnership and years of work and service for people in Vancouver."

Trudeau's policies and promises also align with Robertson's, particularly on the need for a subway along the Broadway corridor and an aggressive plan to build more housing.

So, again, why leave now?

"My hope is that with an aligned provincial and federal government, we will see big improvement in the next few years," the mayor said.

If Robertson's decision to leave is, as he said, because of family, he has not been the type to elaborate further or share details of his private life, despite his very public separation with his wife, Amy, and later romance with pop star, Wanting Qu.

All he would divulge Wednesday was that his kids were all in their 20s and he planned to attend one of his daughter's graduations next week.

"That's about all there is to it on the personal side of things," he said.

In looking back on some of the stories I've written about Robertson over the years, I came across a profile I wrote in 2008 when he first ran for mayor.

He talked about his late father, John, who vanished in February 1991. Five years later, his remains were found in the Mt. Seymour forest. At the time of his disappearance, he lived alone in an apartment on the North Shore.

He was facing tough times in his business and had split up with his second wife. He was diabetic and getting over a bad bout of the flu.

At the time, Robertson described his father as "a very joyful man and super committed to family."

He was 53 at the time, the same age Robertson is now.

Looking back is what the mayor's supporters and critics have been doing since news broke of his decision to not run again. If social media is a gauge, then some people liked what Robertson has done for the city, others are dancing a jig.

What will be his legacy?

"Ask me in a year," he said. "At this point, I still feel like there's a lot to do, a lot to deliver in this coming year. So I'm excited about that and we have a ton of work to do. So I think it's premature to talk about any legacy until I've done all I can do."

Implementing separated bike lanes, not ending "street homelessness" by 2015 and Vancouver becoming more unaffordable and congested on his watch will be factors in determining his legacy.

But as Robertson said from his office, it's unfair to solely target the city for transit and housing problems when previous provincial and federal governments haven't been on board to help.

He then went on to repeat some of what he wrote on his Facebook post and cite accomplishments and milestones, including opening shelters, building rental housing and creating a "creative, resilient economy with leading edge tech and innovation." His government also implemented an empty homes tax and new rules to monitor short-term rentals.

He had this to say about his promise to end homelessness.

"My intention in setting that goal in 2008 was to make this a top priority issue and keep attention on it for all the years to come. It's sobering and powerful to not achieve that goal, but keeps us on our toes to ensure we don't let up. I have no regrets about saying that, but lot's of frustration with not being able to make it happen and rally all the other governments of the day."

In the meantime, his party appears to be in disarray, with an AGM Monday to sort out what its plans are for this year's campaign.

So far, only Vision council incumbents Raymond Louie and Heather Deal say they will seek re-election. Reimer is out and councillors Tim Stevenson and Kerry Jang remain coy.

Louie, however, may take that run for mayor that he set out to do in 2008 before Robertson stopped him in a mayoral nomination race. Louie plans to talk with his family over the next few days before deciding.

The NPA isn't saying who will be their candidate, although NPA Coun. Hector Bremner, former Conservative MP Wai Young and the party's candidate in the 2014 race, Kirk LaPointe, are all possible contenders.

Then there's Green Party Coun. Adriane Carr. She topped the council polls in the 2014 election. She is out of town and couldn't be reached to see if she will be swayed to run for mayor.

For now, the race for the mayor's chair is wide open and Robertson will be on the sidelines to watch it. He isn't saying what his next move will be.

"I will set that aside until I work through this year and get as much as I can done. I don't want any distractions from making this a banner year for Vancouver and finishing strong."