Assaults against Vancouver cops up 39 per cent 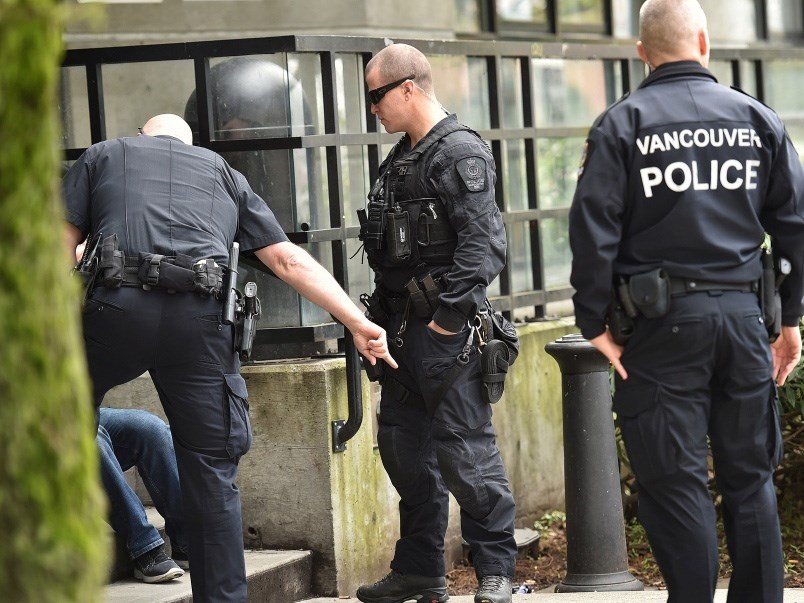 Assaults against Vancouver police officers increased 39.2 per cent in the first six months of this year. Photo Dan Toulgoet

Let me begin with this statistic: assaults against Vancouver police officers increased 39.2 per cent in the first six months of this year compared to the same period last year.

It’s a question Police Chief Adam Palmer answered at the most recent meeting of the Vancouver Police Board. His answer might surprise you.

“Officers are getting spit on on a fairly regular basis, which is completely nasty and inappropriate and uncalled for under any circumstances,” the chief said.

“But that counts as an assault, and people are charged with assaulting that peace officer.”

Palmer didn’t indicate how many assaults recorded in the first six months of this year were related to spitting. But he said officers have also been seriously injured by people resisting arrest.

He pointed to the Granville entertainment district and the Downtown Eastside as areas where police are being assaulted more than other neighbourhoods.

Deputy Chief Howard Chow added that the 39.2 per cent stat is only related to charges and doesn’t fully capture the number of times police are punched or kicked on the job, but don’t report it.

“Quite often, our members are going to calls and they’re getting kicked while they’re affecting an arrest, or chasing somebody down and there’s a struggle and they get punched,” Chow told the board.

He said district commanders have been told to capture that kind of information. Chow said alcohol, drugs and mental health issues are connected to many of the assaults on police officers.

Neither Chow nor the chief mentioned names of officers who had been assaulted or injured. But I came across a recent court case that gives some insight to what cops deal with on the Granville strip.

Const. Pamela Karellas broke her left tibia and fibula in the early morning hours of Jan. 15, 2018 while attempting to arrest an intoxicated 265-pound man in the 1100 block of Granville Street.

Karellas, who is five-foot-one and 110 pounds, testified she was kicked by the man, who had demanded a cigarette from her partner. Both officers were in uniform and in an unmarked police car when approached by the man, who refused to leave.

Her partner, Const. Russell Sargent, testified the man said: “Give me the f***ing cigarette or else I’ll f***ing kill you.”

Sargent stepped out of the cruiser and told the man he was under arrest. The man refused to comply with the officer’s order and went into a fighting stance.

Sargent took him to the ground but struggled to keep control of him. A former doorman from Ireland came to assist, crossing the man’s legs to stop him from kicking and flailing.

Sargent said he was on top of the man when he heard a loud bang, followed by a scream from Karellas. He looked over his right shoulder and saw his partner holding her leg.

Her leg, he said, was “at a completely unnatural angle.”

More police officers arrived on scene to get control of the man.

B.C. Provincial Court Judge Gregory Rideout ruled that testimony from the former doorman—who suggested the man fell on top of Karellas—and that of Karellas provided “two conflicting versions” of how the officer broke her leg.

Before I conclude, I guarantee some people reading this will be fired up because I didn’t provide examples of Vancouver cops being charged with assault.

First, this is not a feature story.

Second, regular readers will know I’ve written many articles over the years about bad cops. So I urge you to read this before you sound off.

Then read this piece about a cop who shoved a woman with cerebral palsy to the ground.

Then try this one about the escalation in police dog bites, followed by the case of a man who won a settlement after being beaten by the cops. That should keep you busy for some time and provide the context you’re looking for.