Black Fly goes for the jugular

"Summers on the Kingston Peninsula are beautiful but Winters will kill you.
Sep 21, 2014 12:10 PM By: Andrew Fleming

"Summers on the Kingston Peninsula are beautiful but Winters will kill you.”

This was a bad joke when I was growing up in southern New Brunswick back in the '80s, a bit of gallows humour after the arrest of mass murderer Noel Winters, who lived and preyed on victims on this vast stretch of countryside reached by ferry from the working class city of Saint John.

But it was quite different for filmmaker Jason Bourque; Noel Winters was his neighbour.

“My parents thought [the Peninsula] was the ideal place to raise a family,” says Bourque. “It’s now buzzing with a horrific tale of shot-gunned neighbours and garbage bags of hacked up bodies disposed of at the Browns Flat dump. It’s brutal, terrifying and leaves an indelible mark on me, a thirteen-year old aspiring filmmaker.”

(Full disclosure: I went to high school with the guy and even appeared in an early “action” video of his — also involving an axe — which mercifully has never been uploaded to YouTube.)

Thirty years later, Bourque (Music for Mandela, Shadow Company) has finally made a feature film loosely based on Winters' tale. 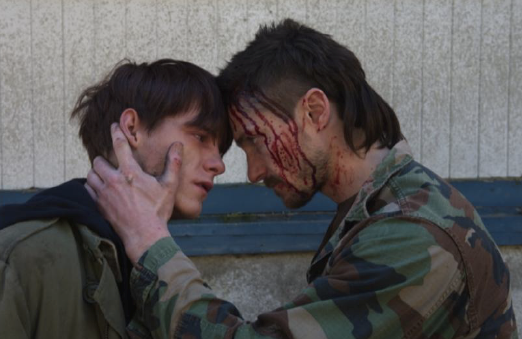 The final result is a chilling, highly believable portrait of a serial killer that is far removed from a typical horror film, focussing on the amoral psychology rather than the gore. It offers a serious attempt to answer questions about the kind of person who kills without remorse. Picture Trailer Park Boys as imagined by David Cronenberg and set next door to Stephen King's rural Maine and you'll be on the right track.

Black Fly premieres Sept. 27 at the Rio Theatre as part of the Vancouver International Film Festival.