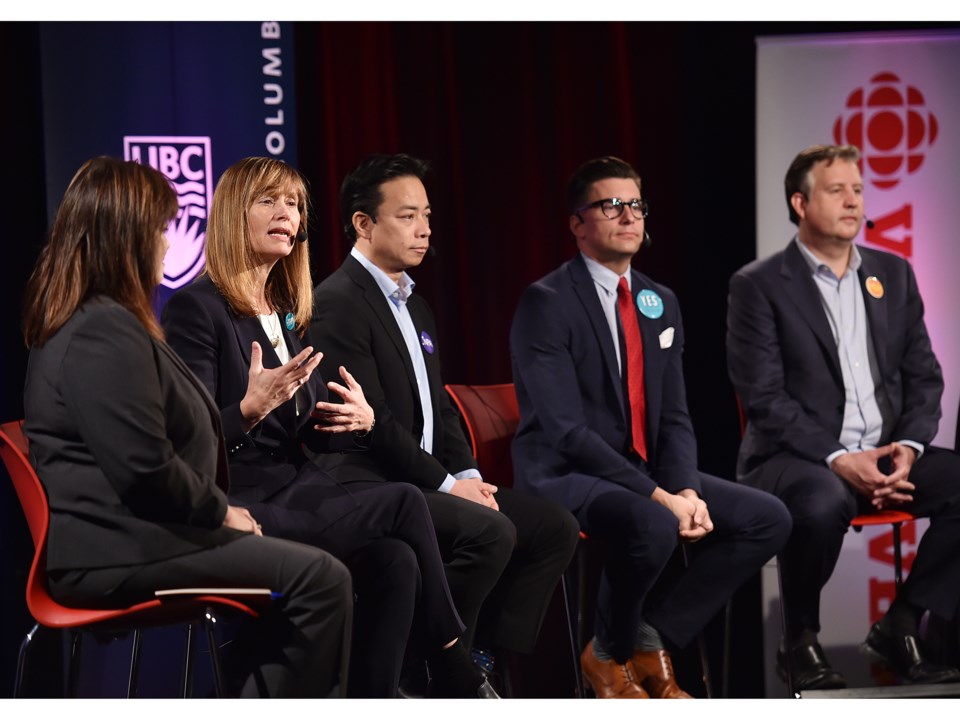 The civic election campaign comes to a halt this Saturday.

Picked your choice for mayor, yet?

Chances are you want to know what the candidates are going to do about bringing some relief for renters and prospective buyers in a city mired in an affordable housing crisis.

What’s the definition of affordable?

That was one of the questions posed Wednesday at a debate to five of the 21 mayoral candidates campaigning to replace the retiring Mayor Gregor Robertson.

The University of B.C. teamed up with CBC to host a debate at the public broadcaster’s downtown headquarters before a small audience, which included me.

The Early Edition’s Stephen Quinn and On The Coast’s Gloria Macarenko challenged the candidates and took questions from the audience.

It was billed as a debate about housing and, for the most part, the candidates stuck to the topic in their answers, although backyard chickens were inexplicably mentioned during some cross-talk.

What I’ve decided to do is empty my notebook onto this page and give you some sense of what each candidate said. Be warned, a good portion of what I heard required follow-up questions of all candidates, but I didn’t have time to do that.

Also, the way I’ve written this up is a little choppy. As mentioned, it’s from my notebook. It’s also been a long day and I just want get something posted for you to read.

So here we go…

Says everybody in Vancouver knows city hall is “shrouded in ideology.” Says cost to demolish the Georgia and Dunsmuir viaducts was $300 million in 2013, then jumped to $1.7 billion in 2017. (Fact check).

Calls Sylvester “Vision Lite” because of former membership with Vision Vancouver. Told Stewart wanted to ask him question but he blocked her on Twitter.

Stewart, a former Burnaby NDP MP, said blocked her long time ago when she was Conservative MP in Stephen Harper’s government.

Says provide tax incentives, leverage through zoning and build around transit hubs to spur development.Talked about plan to have low-cost homes that sell for $300,000, or rent for $1,500 per month. (Not clear on this).

“Vancouver is a city that needs youth.”

Vote for her and get lower taxes, cleaner city, more efficient city where transportation gets you where need to go. Vote for others means higher taxes, the demolition of viaducts and more politics that will “entitle elitists and normalize drug use across Vancouver.”

Says wanted to be “unity candidate” but Stewart joined race to “split the vote.” Says support from across political spectrum, including former NPA, Greens, provincial NDP and federal Liberals.

Wants to renew co-op leases for 4,000 to 6,000 families. Will fast-track applications, reduce fees for landowners who want to build rental on property to help “missing middle.”

In first 100 days in office, wants to create 100 new ideas on what can build on land. Reminds Young she wanted to run for mayor with NPA in exchange about her being “Vision Lite.”

Says will support subway to UBC. Wants rental zoning along line and “innovation centre” for science and health established between Cambie and Granville. Wants co-housing and set up housing authority similar to Whistler.

Talked about “gentle densification” on West Side. “Incredible” architects in city, should use them to design different models of what’s doable in single-family neighbourhoods.

Says not a fan of “upzoning,” where landowner can build market on property and see rise in value. Says that value should be captured like community amenity contribution and put towards affordability fund? (Check).

Exchange with Stewart in which he asked repeatedly for her to give him number of how many housing units her plan envisions in 10 years.

She says wants to first achieve three per cent vacancy rate (current rate below one per cent) and have rental units built where tenants pay no more than 30 per cent of income.

“I’m going to create [housing] until we get there,” she says of three per cent vacancy rate goal.

Stewart: “So a million units [you want to build]?”

Her response: “If that’s what it takes Kennedy…”

Wants 2,800 units available at shelter and disability rates ($375 per month?) and a focus on women, particularly Indigenous women.

Says definition of affordable is 30 per cent of income but adds that should have supports and social housing for people below poverty line.

Says electing her would be historical moment. Reminds audience that city never had a woman as mayor. (Jennifer Clarke in 2002, Anton in 2011 said same thing).

Sticks to narrative about how he co-founded two companies (Nurse Next Door, Rocksalt bagels) and knows how to build teams, seek out talent.

Accuses Stewart of being a Vision Vancouver candidate. Says he’s reached out to all parties to work together, but says Stewart has not contacted NPA about working together. (Response to question about working with a divided council).

Says only candidate with plan to bring immediate influx of rentals by allowing two basement suites per home. Acknowledges not all 40,000 homeowners take him up on idea, but even if some did, would benefit renters and help pay owners’ mortgages. Students can stay there.

“It’s not sexy,” says of basement suite plan, but needs to be done.

Bremner said Sim’s idea is exploitive and doesn’t give renters a shot at home ownership.

Sim stresses that NPA also has mid and long term solutions to housing crisis. Argues with Stewart, who challenged him on providing number of units. Stewart repeats that his plan will build 85,000 units over 10 years, with 25,000 of those affordable housing on city land.

Wants a city-wide plan instead of spot rezonings and individual community plans. Will speed up permitting to get housing built faster.

“I don’t pick fights for sake of picking fights.”

Says definition of affordable is 30 per cent of person’s income.

“We’re not saying build for the sake of building buildings. I think that four more years of this form over function has got to stop.”

Says has Liberals, Conservatives, New Democrats and Greens in his party. Says people should be able to make fresh start here, talks about his ideas “ran afoul” of some NPA donors (Response to Stewart’s question about why he left NPA).

Talks about time to update Bartholomew Plan from late 1920s (city’s first comprehensive plan for city). Says speculation not driving real estate market. Says “dangerous game to be playing” for people to point fingers at people (Asians?) who don’t look like him, Sylvester or Stewart.

In response to audience member question about concern over character of neighbourhoods and “cookie cutter” approaches, says people define neighbourhoods, not buildings.

People “screaming” for collaborative approach they didn’t get from 10 years of Vision Vancouver. Says his plan not just about towers, but adding four storeys to a building that houses corner store.

“It’s not that they missed anything, it’s what they ignored,” he says in response to Quinn’s question about what all other politicians over years have missed about housing.

Goes on to talk about outdated Bartholomew Plan again. Says been tinkered with over years, but nothing significant.

Also met with Musqueam. Wants quarterly meetings with band and create policy together. Says Bartholomew Plan based on class and segregation? (Check)

Asked by Macarenko about his definition of affordable, wouldn’t give number. Calls them “political numbers.” But said affordability is not $2,100 per month for one-bedroom (Figure likely from Padmapper and not CMHC, which is much lower).

Closing remarks says he was homeless when arrived in 96. Appears his voice is breaking. Says privilege to be on stage at debate.

Tells audience to pick him because he will put people first again and “make humans the centre of decision making again” instead of buildings and politics.

Asked at least three times to say how his housing plan is different from current Vision-led plan to build 72,000 units of housing over 10 years.

Talks about consulting experts and thinks 85,000 units are doable over 10 years. Also wants to double number of affordable housing units in current plan.

“That is a huge difference. It’s a complete shift of focus. We’re leaving the market side to do what it does, but we’re focusing all our intent on getting affordable rentals, and that is a big difference.”

“We’re in the middle of a housing crisis, people are completely stressed out and we need to move forward. And I have the experience and the plan to make that happen.”

On question of leading divided council: Says already working with OneCity (endorsed him) and is “very good friends” with Adriane Carr of Greens. (Note: Greens not endorsing anyone for mayor. )

Also got arrested with Green leader Elizabeth May at Kinder Morgan gates. Worked with COPE in the 1990s and supporter of Jean Swanson.

Says will get subway built to UBC because he has experience in Ottawa as MP for seven years and can work with governments to get funding. Says UBC has to pay, too.

Wants to make sure density matches character of neighbourhoods. Will work with First Nations to build housing specific to Indigenous people.

Says definition of affordable is one-third of income.

Wants to get to a place in Vancouver where housing no longer dominates conversations at parties. Should be talking about arts and culture, books we’re reading, got to get stress out of housing.

That’s all I’ve got for now. Just a few more days to go.

As Justin McElroy and Gerald Baier recommended at the end of the debate, read up on these candidates’ platforms. All have websites.

Good luck with your research and your choice.