This week’s rains and rising temperatures will likely wash away the last of the snow and ice along with memories of the “crises” that beset us from icy streets and sidewalks to a shortage of winter shelters.
Jan 17, 2017 4:53 PM By: Allen Garr 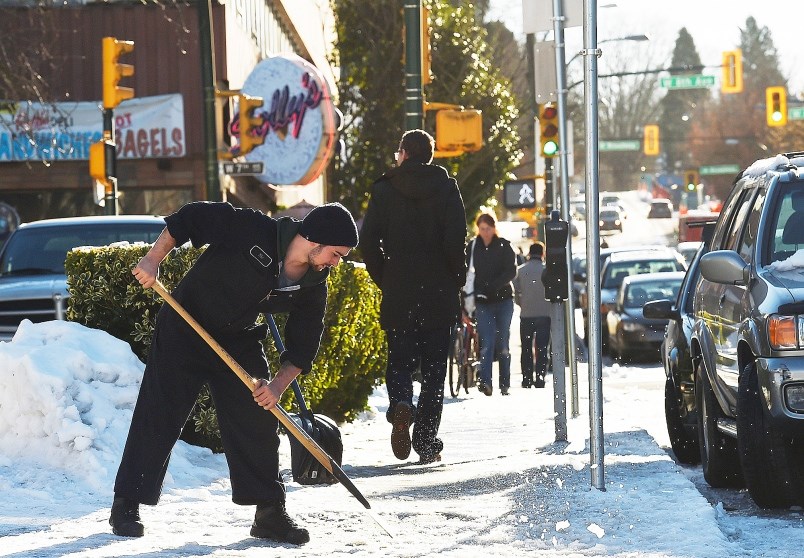 The city’s 311 line was flooded with calls of complaints about perilously icy sidewalks. Photo Dan Toulgoet

This week’s rains and rising temperatures will likely wash away the last of the snow and ice along with memories of the “crises” that beset us from icy streets and sidewalks to a shortage of winter shelters.

There was one sweet image of people skating for the first time in years on Trout Lake. But the city’s 311 line was flooded with calls of complaints about perilously icy sidewalks.

And it is hard to imagine we would forget folks lining up at fire halls to get their free buckets of salt and sand, at times being in such a frenzy police had to be called to restore order. And who was that jerk who turned up in a pickup truck and tried to load garbage bins with salt until he was told to leave? And, oh yeah, what about the person who went online to sell their salt — first for $50 a bucket and then pushed the price up to $80?

Aren’t we a civilized lot?

And while all of that was going on, community centres were struggling with the need to open their doors as “warming shelters” for the city’s homeless population who would otherwise find themselves on the street in the cold.

If the city found itself ill-prepared to deal with the ice and snow, that was doubly the case with the need to provide for those homeless people.

You could blame the province for not sufficiently meeting the needs of our most vulnerable citizens. But what I find most amazing is this: It took a letter from homeless activists to light a fire under the city to order the opening of community centres to serve those needs.

On Friday, Dec. 16, a letter signed by Pivot Legal Society, Megaphone Magazine and Judy Graves, the city’s former homeless advocate, among others, called on the city to deal with this crisis.

Graves now says the city was asleep at the switch; they didn’t see it coming: “They had to hire a new me.”

The following day at about 2 p.m., city manager Sadhu Johnston called the park board’s general manager, Malcolm Bromley, who was in a furniture store at the time, to order/ask him to open community centres overnight to provide warming shelters.

It turned out, as West End Community Centre Association president Dave Pasin said, a “laudable program that was ill thought out.” Even though homeless people are regular visitors to community centres across the city during regular operating hours, this was different.

Basically, neither the city nor the park board had a plan in place; it was not much different, as Judy Graves pointed out, than what would be needed in the event of an earthquake.

Community centre staff, in spite of their best intentions and remarkable efforts, were simply not sufficiently resourced — be it towels for those wanting showers or “rig boxes” for used syringes. Nor were they sufficiently trained to deal with any issues that may erupt because of the heightened stress among some of the homeless people.

More resources were added as time passed. Security guards and park rangers, who knew the folks seeking shelter and regularly dealt with them in the city’s parks, helped a fair bit.

But once the Christmas break was over and regular programs resumed for the rest of regular community centre users, there were complaints about people feeling “uncomfortable,” even “fearful,” with homeless people around. A tipping point of sorts was reached when a child at Creekside Community Centre found a used syringe in the washroom.

That incident led to the three NPA park commissioners demanding an emergency meeting of the board last week. They were armed with a motion to shut down all the warming centres until staffing levels and skills were improved.

As you may have read in the Courier, the motion failed. The West End centre, which had closed, was re-opened.  Park board chair Michael Wiebe noted most of the response from the public was supportive of keeping the centres open until the weather crisis passed.

So with the rains and warming temperatures that is now the case.

But one would hope the city would take those lessons learned and have a plan in place the next time these crises arise rather than have them overwhelm us all.