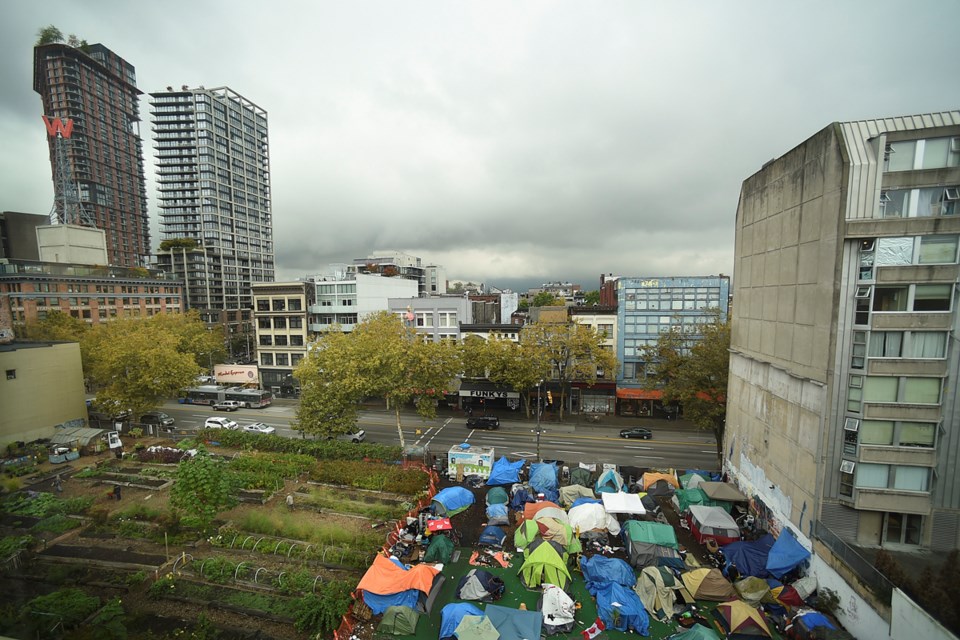 Mayor Gregor Robertson has committed to building 100 per cent subsidized housing on a city lot at 58 West Hastings, which is currently occupied by campers and a garden. Photo Dan Toulgoet

Kind of an easy one for news junkies, maybe not so much for others.

Question: What did Mayor Gregor Robertson sign his name to Aug. 2 after meeting with activists at the Carnegie Community Centre at Main and Hastings?

A)     A petition from residents to hold monthly town hall meetings in the Downtown Eastside, where he will stand in a room for at least two hours and take questions from all comers?

B)      An agreement to live in a single-room occupancy hotel in the Downtown Eastside for one year?

The right answer is, none of the above.

What Robertson did sign was a commitment to have 100 per cent of the 250 housing units to be built on a vacant city lot at 58 West Hastings St. to be subsidized — and all of them to be 100 per cent at welfare and pension rates  and “community-controlled.” That commitment also has the project, which will include a 55,000-square-foot health centre, going to rezoning by the end of June 2017.

Which is quite a commitment.

And here’s why: The project is estimated to cost $65 to $70 million, and there’s little, if any, money been raised to pay for it. Reporters heard at a news conference Oct. 6 the Vancouver Chinatown Foundation has taken on the task of raising $30 million of the bill. Operating costs haven’t been included in the overall tab.

As for the balance and bulk of the cost, the go-to answer from the mayor is not a surprise.

“We want to see the provincial and federal governments step forward to support this project, so we can get it up to 100 per cent of welfare rate and old aged pension rents,” said Robertson of the site located across the street from Save-On-Meats.

I ran into a guy about an hour after the news conference who found the mayor’s announcement quite interesting. The guy’s name is Rich Coleman. He’s the province’s housing minister. I happened to be leaving a scrum with Education Minister Mike Bernier outside Canada Place when I stopped Coleman in the street.

We talked for a few minutes and he followed up with a phone call later in the day.

Off the top, the city has not applied to the provincial government for funding, said Coleman, who was frustrated by a continuing trend of the mayor announcing projects before the province has examined whether it will contribute money.

“They always go out and just announce stuff before it’s all finalized,” the minister said. “So I don’t really get into [the mayor’s] announcements. They do this every once in a while, where they make an announcement and say we’re here but we want somebody else’s money.”

The minister noted the mayor’s signed commitment to build 100 per cent subsidized housing was made to activists in the Downtown Eastside. Coleman knows of no consultation with the city before the mayor made his promise.

“Now he’s asking us to get involved, after the fact,” said the minister, who also has concerns about housing more than 200 people with similar challenges in the same building. “That’s a different conversation.”

As Coleman has pointed out to reporters over the years, the provincial government has spent millions of dollars in Vancouver, particularly on the 13 buildings that were built to house formerly homeless people and people at risk of homelessness. The government also bought and renovated more than 20 single-room-occupancy hotels, contributed money for shelters, temporary housing and supplied rent supplements.

“The one thing I always say to [the city] is, ‘You might want to start off by saying that we’d like to thank our most significant partner in housing, who’s paying 90 per cent of the bills,’” Coleman said.

The property at 58 West Hastings is still occupied by campers, who have used the vacant land off and on since the 2010 Winter Olympics as a place to protest inadequate housing in Vancouver. It's also been used as a garden. The city acquired the property from Concord Pacific as part of rezoning deal related to the developer’s condo development at 10 Terry Fox Way.

For you history buffs, the site was once home to the National and Columbia theatres. It was originally the Cameraphone Theatre, which opened Nov. 30, 1908. In 1931, it became the Rose Theatre before being turned into the National Fruit Market. By 1940, it was a Wosk’s furniture store.

Now the old theatre property is going to become 100 per cent subsidized housing, according to the mayor. It appears, however, it will take one heck of a performance to convince the provincial government to play a part.

No word from the feds on whether they will make a cameo, or play a starring role.