Apologies for our lengthy absence the last few months. The team at K&K took a well-needed sabbatical to recharge its engines, skip the light fandango and nurse a nagging groin injury. (Don’t ask.
Apr 27, 2016 1:14 PM By: Kudos And Kvetches 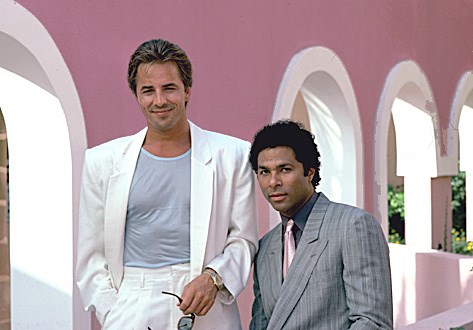 Pantone went with two shades for its Colour of the Year, and they bear an uncanny resemblance to those sported on Miami Vice.

Apologies for our lengthy absence the last few months. The team at K&K took a well-needed sabbatical to recharge its engines, skip the light fandango and nurse a nagging groin injury. (Don’t ask.)

But we’re back, more or less, and catching up on some important issues that don’t involve the sad passing of musical icons — namely Colours of the Year.

After boldly declaring the full-bodied “Marsala” as its Colour of the Year for 2015, the precious peeps at Pantone have taken it up a notch for 2016. Not content with being confined to one colour, this year for the first time Pantone has gone with two shades as its Colour of the Year — Rose Quartz and Serenity. Despite sounding like the names of two New Agey adult film stars, Rose Quartz is apparently a “persuasive yet gentle tone that conveys compassion and a sense of composure,” while Serenity is “weightless and airy, like the expanse of the blue sky above us, bringing feelings of respite and relaxation even in turbulent times.” Somebody actually wrote that.

If you ask us, Rose Quartz and Serenity look a lot like the pastel colours Don Johnson and Philip Michael Thomas would wear on Miami Vice and that informed our own outfits at more than a few high school dances and helped get us laid exactly zero times.

Not to be outdone, Benjamin Moore announced its Colour of the Year after “months of research” as its colour and design team apparently travelled the globe. And after all that time and effort what did they come up with? “Simply White.”

“The colour white is transcendent, powerful and polarizing — it is either taken for granted or obsessed over,” said Benjamin Moore creative director Ellen O’Neill who we imagine ruefully sipping a martini glass filled with liquid nitrogen.

Incidentally, for the 13th year in a row, K&K’s Colour of the Year is Alcoholic Uncle’s Unwashed Beige Socks. According to our design team, “AUUBS is more tired than resigned, manky with a hint of quiet desperation and embodies the disappointment, missed opportunities, squelched dreams and loss of hope we all feel or push down into the deepest recesses of our soul, day after day until we hardly feel anything at all except the vague residue of a feeling. That vague residue of a feeling, speckled with tiny shards of cornflakes spilled across the living room carpet but never vacuumed up because who needs a vacuum, is what Alcoholic Uncle’s Unwashed Beige Socks is all about.”