Since I started writing this column, there is one controversial Vancouver topic I have tended to avoid, until this week. I speak, of course, of bicycle lanes. In the interest of full disclosure, I own a bicycle, but do not ride it very often.
Mar 1, 2017 9:25 AM By: Michael Geller 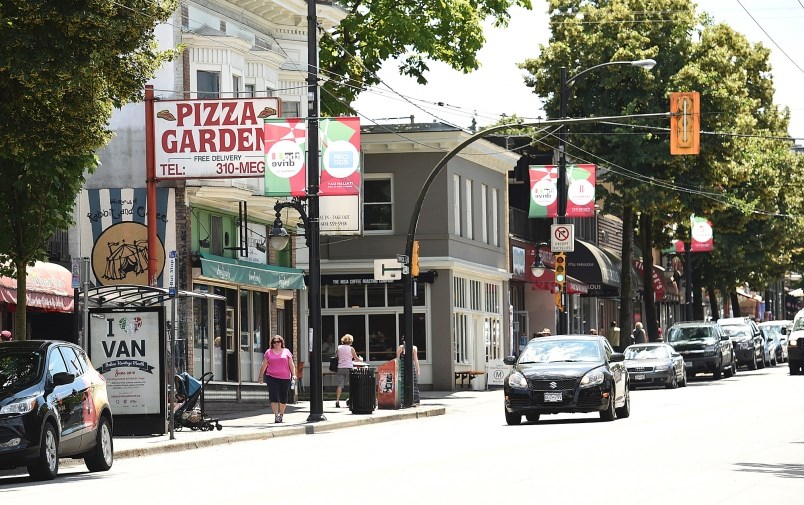 The Commercial Drive Business Society was becoming increasingly upset by the city’s position on the proposed bike lanes, which they fear will be a major threat to the future vitality of the Drive. Photo Dan Toulgoet

Since I started writing this column, there is one controversial Vancouver topic I have tended to avoid, until this week.

I speak, of course, of bicycle lanes.

In the interest of full disclosure, I own a bicycle, but do not ride it very often. I am afraid to. I therefore like the idea of safer cycling routes around the city.

However, this isn’t a general column about bicycle lanes. It is about a specific City of Vancouver proposal to reduce parking and add bicycle lanes along both sides of Commercial Drive.

This is not a new story. Mike Howell wrote about it in December 2015 and Naoibh O’Connor wrote a follow-up story last October.  So why am I writing about it?

I recently heard from a friend that the Commercial Drive Business Society was becoming increasingly upset by the city’s position on the proposed bike lanes, which they fear will be a major threat to the future vitality of the Drive.

I was also intrigued by the fact that a group of people, who I assumed would be very much in bed with the mayor and council, were so upset with them.

I decided to investigate, armed with a recent study from Toronto’s Parkdale neighbourhood on why local businesses shouldn’t worry about eliminating on-street parking to accommodate cyclists.

I drove to the office on Commercial Drive but had to park two blocks away. I couldn’t find parking. I met Nick Pogor, the executive director of the society, in a non-descript second-floor office next to Greenpeace Vancouver. On the wall was a flow chart for the society’s many activities including Family Day and Italian Day, all of which can be found on the website www.TheDrive.ca.

Noting that Commercial Drive narrows from four lanes to two at First Avenue, I asked to see the city’s bike lane plans, only to be told that the society has never seen any. I was also told that although the society has sent letters to every city councillor, and even provided each of them with a large binder with a 5,000-signature petition, none of the Vision councillors has responded. I found this quite astounding.

Referring to the Toronto study that analyzed the transportation modes used by customers to get to neighbourhood shops, I suggested that perhaps Pogor’s society should undertake a similar study.

He proudly told me that they had, in fact, undertaken such a study. It concluded that out of just over 1,000 respondents, although many customers frequenting Commercial Drive owned bikes, only 9 per cent shopped by bike, while 25 per cent took the bus, 31 per cent walked, and 35 per cent drove.

When I suggested that improved bike lanes might increase the percentage of cyclists and improve business, as was the case in Toronto, Pogor pointed out that Commercial Drive is not just a neighbourhood shopping area; it’s a destination for the city and region. Consequently, there will always be a need to accommodate those coming by car. As it is, there is a shortage of on-street parking. He didn’t have to tell me that.

We discussed the fact that anyone who has driven beside cyclists along Commercial Drive knows it can feel dangerous. However, Pogor told me there are nearby dedicated routes paralleling Commercial Drive, as well as numerous routes running east-west, as evidenced by the city’s cycling map.

Perhaps this is the reason when the local neighbourhood was canvassed as part of the Grandview-Woodland neighbourhood planning study, only five out of 440 people reportedly identified improved bicycle lanes along Commercial Drive as a priority.

As I was about to leave, Pogor wanted to talk about a goods movement survey undertaken by the city, which looked at accommodating loading and unloading for local businesses. Prior to the start of the study, the society was told the results would be shared with them. They never have been, prompting some members to suspect they do not support the city’s proposal.

Over the next few years, there will be significant new development activities along the Drive. Changes are coming. Perhaps it is time for the city’s new senior management to pay a visit to the Drive, and head upstairs to the society’s offices. I suspect they will be very welcome.

Note: This column has been corrected since first posted.