Crossing the line separating First Nations from others

It was the eve of National Aboriginal Day, and a bald eagle sat high atop a tree overlooking Stanley Park’s Malkin Bowl. The symbol was not lost on the concert-goers who alerted each other to this sentry, who, like us, settled in for the show.
Jun 30, 2015 9:23 AM By: Jessica Barrett 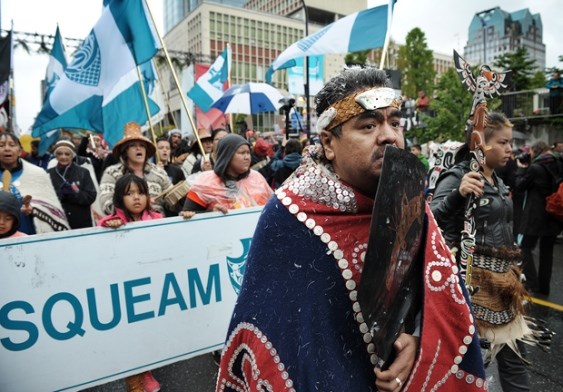 Members of First Nations communities and their supporters hit the streets en masse for the 2013 Truth and Reconciliation Walk. Photo: Rebecca Blissett

It was the eve of National Aboriginal Day, and a bald eagle sat high atop a tree overlooking Stanley Park’s Malkin Bowl.

The symbol was not lost on the concert-goers who alerted each other to this sentry, who, like us, settled in for the show.

It was perfect, considering the lineup: Ottawa’s A Tribe Called Red, whose mix of traditional powwow chants and electronic music is some of the most innovative sound coming out of this country. Supported by Vancouver’s blonde-haired, blue-eyed Blondtron and her racially diverse band of booty-shaking backup dancers, and the traditional aboriginal Git Hayetsk Dancers, the whole night seemed a fitting representation of West Coast diversity — complete with a distinct racial divide as impermeable as it was subtle.

At first, looking at the crowd gave me that warm, fuzzy feeling familiar to those who pride themselves on being part of Canada’s multicultural makeup. I’ve never been at a mainstream event in Vancouver headlined by an aboriginal act, and I’ve seldom seen such a strong representation of aboriginal people in the crowd — almost 50 per cent. But then I noticed how we self-segregated. People clung to their own kind, standing right next to, but worlds apart from each other; distinct and separate tiles in the cultural mosaic.

Race is a topic that makes Canadians profoundly uncomfortable. While our neighbours to the south have robust and messy conversations about race and racism — especially in the midst of their unfolding crisis — here, we shy away from this entirely. We are so worried about offending each other that we rarely talk about our differences at all, save to celebrate the multicultural-ness that has formed the core of an otherwise vague national identity. Nowhere is this more evident than how we speak about and to First Peoples, or rather, don’t.

All decent people are rightly horrified by the stories of residential school survivors, of missing and murdered women, of deplorable living conditions on reserves. We shake our heads at the statistics and stories of the disproportionate amount of aboriginal people in prisons and in foster care. We are appalled by revelations of past wrongs — government condoned science experiments on aboriginal children, for instance. Good God.

But I don’t think we know what to do with this information, how to let it sink into and change our everyday interactions. At least, I don’t. I feel paralyzed by the scope and scale of the grief, shame, guilt and horror. Unlike other marginalized groups of whom I consider myself a proud ally — for example LGBTQ people or other visible minorities — I don’t have a lot of contact with First Nations people in my everyday life. Just writing this makes me feel uncomfortable. It challenges my perception of myself as a culturally sensitive, inclusive person. Because I know if I delve into the conscious and unconscious choices that have formed my social circles, I’ll have to confront my own bias, my own discrimination. To be brutally honest, I probably avoid First Nations people because I don’t know how to talk to them about their experience of, well, being First Nations. Or even if I should. And I don’t know where to turn for guidance.

It’s really hopeful to see a movement among educators to include the stories of residential schools in curricula. I am glad our children will learn about this history the way I learned about the Chinese head tax, Japanese internment and the Komagata Maru. Perhaps that will help future generations bridge the gap that seems to exist between Canadians of various immigrant backgrounds and our first peoples, who, absurdly, are cast in the role of the ultimate Other.

But what about those of us who are long out of the classroom? Where can we learn?

In Vancouver, we are very good about giving lip service to First Nations. We proudly display Haida art at the airport. We start every carnival, picnic and community meeting with the acknowledgement that we are on Unceded Coast Salish Territory. But we rarely unpack these words, discuss what they really mean and what, if anything, we might do about it. Without that, they ring hollow — just a rote uttering to assuage white liberal guilt. We have so much work to do because the real test of where we’re at as a society is not gauged by official declarations and apologies but when we’re squished up against each other in everyday life.

And you want to turn to her and say: “You’re absolutely right. I don’t.” But you don’t know how to do that, either. So instead you stay silent, and stay on your side of the invisible line that separates you.