Did a Christmas miracle occur at Vancouver city hall this week?

At issue was COPE Coun. Jean Swanson’s motion to save the loss of Downtown Eastside hotels
Dec 12, 2019 4:00 PM By: Mike Howell 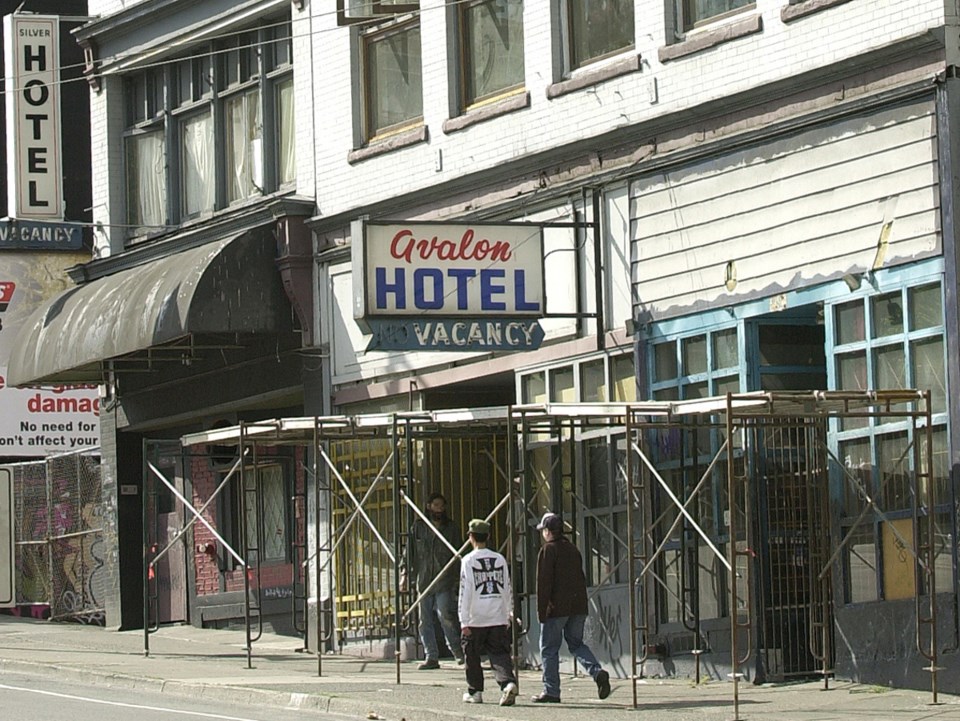 The Avalon Hotel on West Pender Street is one of the single-room-occupancy hotels that COPE Coun. Jean Swanson is worried will be sold, fixed up and displace low-income tenants. Photo Dan Toulgoet

I wouldn’t exactly call it a municipal government Christmas miracle.

But what happened Tuesday at city hall was pretty close to it.

Let me set this up for you…

COPE Coun. Jean Swanson had a motion before council aimed at slowing the loss of some of the last low-income single-room-occupancy (SRO) hotels in Vancouver.

She named the Avalon, the St. Elmo, the Pacific and the Arno, which she described as some of the better run hotels in the Downtown Eastside. Combined, they account for 180 rooms and rent for about $450 per month.

They’re all for sale and being marketed as “micro-units.”

Swanson is worried that any new buyers will want to overhaul the hotels, jack up the rents and force low-income tenants to look elsewhere to live, including on the street.

“They’ll probably be replaced by more expensive units, maybe up to $1,100 a month,” Swanson told council.

She speaks of what she knows, having been a member of the Carnegie Community Action Project for several years. The anti-poverty advocacy group conducts regular audits of SROs to find out how much rents have gone up since the previous year.

I last reported on the Action Project’s report in March 2018.

The findings: The average rent of 68 privately owned and operated hotels in the Downtown Eastside shot up by $139 in one year since the organization conducted a similar study in 2016.

That put the price of monthly rent in 2017 at $687, leaving tenants collecting $710 in welfare with $23 left to spend each month on food and other necessities, according to the report.

Swanson acknowledged her motion was basically a repeat of a motion the previous council passed in 2017 to prevent the loss of SROs. But she pointed out nothing had been done yet.

“We need urgent action by the province to stop the people from being evicted when new owners take over, or we need to be able to do it ourselves if the province won’t,” she said.

Swanson has long said that rents — particularly when they increase — should be tied to the person’s income, not the market value of a unit. That’s what she wants done here, and her motion requested Mayor Kennedy Stewart to write an urgent letter to the province to put them on notice — again.

Her motion generated a lot of interest, especially from housing advocates in the Downtown Eastside. In fact, 75 people signed up to speak to council Wednesday, but none showed up.

That’s because on Tuesday NPA Coun. Sarah Kirby-Yung asked this question of Swanson, which I’ve paraphrased: If council were in favour of passing your motion right now, without hearing from speakers the next day, would you agree to that?”

Council was unanimous in supporting the motion.

And just like that, 75 people who were going to give up their day — maybe their evening and perhaps another day — didn’t have to show up to city hall to argue for council to support Swanson’s motion.

Within minutes, it was done.

This is very rare.

Granted some issues are more divisive and attract a variety of viewpoints, but there have been many other motions over the years that end up being unanimously supported by council after hours and hours of listening to speakers.

Some readers might see this as silencing the public, characterizing it as the death of democracy.

But Swanson got what she wanted, council was able to get to other business sooner than later and all involved — including media — didn’t have to spend another long day or evening at city hall on one non-controversial issue.

Council being practical, efficient and non-partisan?