Did COPE just promise to end homelessness in a year? 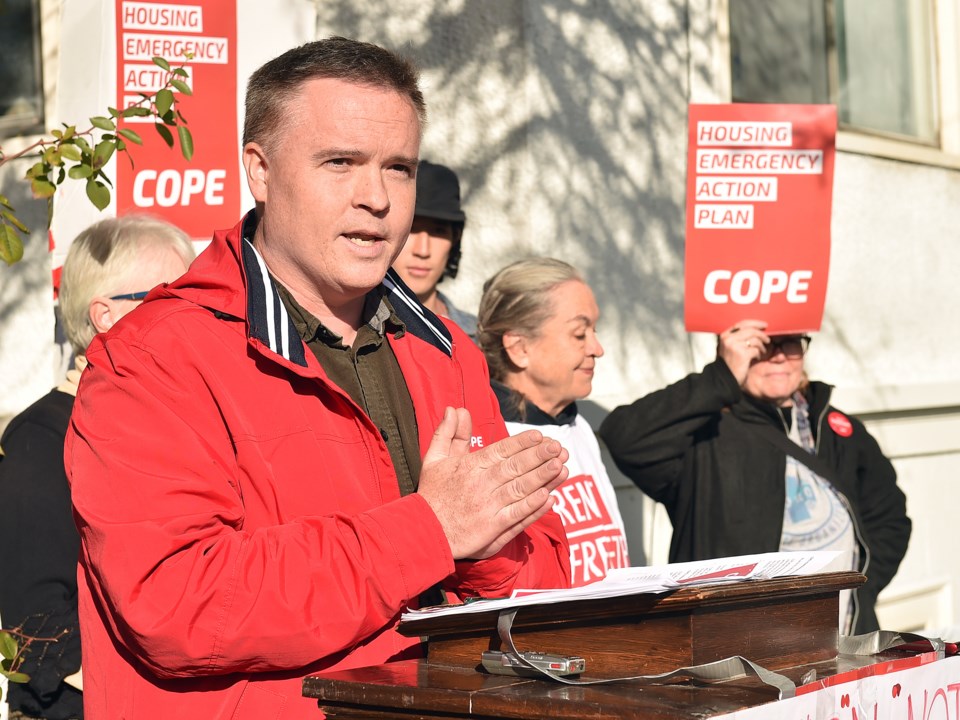 COPE council candidate Derrick O'Keefe promised Thursday to end homelessness in one year. A lot has to happen before such a promise can be fulfilled, including first getting elected Saturday. Photo Dan Toulgoet

If I’ve got this right, COPE promised Thursday to end homelessness within a year of getting its three candidates elected to city council.

“COPE will work with other progressive partners on this city council—and hopefully a progressive mayor—to seek a unanimous vote of mayor and council to pledge an end of homelessness in one year.”

So that means at least 2,100 people—the number recorded in March’s homeless count—living on the street or in some form of temporary shelter will be in homes by October 2019.

That’s quite an ambitious promise to make since Mayor Gregor Robertson didn’t come close to fulfilling his promise to end “street” homelessness by 2015.

And he had a majority for three consecutive terms.

So what does COPE know that Robertson doesn’t?

First, let’s take care of the obvious before we go any further. Even if O’Keefe, Jean Swanson and Anne Roberts were to get elected Saturday, they will only be three of 10 councillors.

Also, COPE is not running a mayoral candidate.

Then there’s the need to get provincial and federal governments on board to meet that goal. One other thing—COPE hasn’t elected a city councillor since David Cadman and Ellen Woodsworth won seats in 2008.

Even with those factors in play, COPE is confidently marching ahead with a 30-page “housing emergency action plan” to end homelessness and build more affordable housing for residents.

In a bit of a re-announcement, the party summarized its plan outside an apartment building on Yew Street in Kitsilano, where two tenants said the owner plans to renovate the building and increase the rent, or buy out tenants for $3,000.

Tenant Kirsty Barclay said it took her four years to get a suite in the building, where rents range from $900 to $1,250 per month for a one-bedroom.

Tenant Valerie Farina said “a lot of us will be fine, but there are people who don’t have the resources to cope with the current housing market and won’t be able to survive in finding a place.”

COPE’s plan is to implement a series of measures to bring relief to renters and to end homelessness. As mentioned, not a lot of it is new but here’s some of it again:

As many of us in the media have previously reported, some of the bigger measures—including a “mansion tax” that COPE says will generate $1 billion over four years—rely on the provincial government giving the city the power to enact them.

Others will require some serious negotiation with fellow councillors from other parties. Maybe some independents will have to be consulted, too.

Only voters know what the makeup of council will be.

I had some questions about all this, specifically with the party’s promise to end homelessness. I clarified with O’Keefe and he said “we can build the modular housing for every counted homeless person in one year—yes.”

Swanson jumped in: “The difference in what we say and what Gregor says is we have a source of revenue [in our plan] that we’re going to fight tooth and nail for—and that source of revenue is the mansion tax. That’s what’s keeping social housing from being built in this city.”

I followed up with Roberts about a comment she made about COPE aligning with other parties and candidates on a new council. I asked her which ones she’d like to work with to implement COPE’s platform.

She mentioned the Greens and pointed behind me to Brandon Yan, one of OneCity’s council candidates, who took a spot next to Roberts. But before Yan could speak, one of the tenants—Kirsty Barclay—obviously didn’t like my line of questioning and let me know it.

“You’re kind of like the fairy that brings the poison at the end of the wedding,” Barclay told me in front of the crowd.

Which made me wonder a couple of things, including: Was her comment a Shakespeare or Game of Thrones reference?; and what kind of weddings has Barclay attended?

Barclay went on to say she didn’t want to give me a hard time, but that she had some real concerns about what might happen to tenants and appreciated COPE sticking up for them.

Anyway, I moved on and asked Yan if OneCity was willing to support COPE’s pledge to end homelessness in a year—if elected. Yan is running with Christine Boyle.

“We have committed to building 2,200 temporary modular homes in the first year—yes,” Yan said.

So that’s three COPE candidates and two from OneCity committed to getting more than 2,100 homeless people into housing within a year.

All the candidates have to do now is get elected and hope others like to make promises, too.