Following the paper trail on the viaducts decision

Just before we get to Transportation Minister Todd Stone’s attempt to delete the City of Vancouver’s decision to remove the Dunsmuir and Georgia viaducts, there is this.
Nov 4, 2015 11:45 AM By: Allen Garr 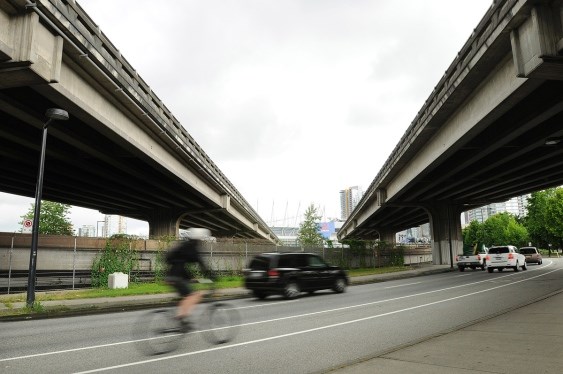 Just before we get to Transportation Minister Todd Stone’s attempt to delete the City of Vancouver’s decision to remove the Dunsmuir and Georgia viaducts, there is this.

The week before council arrived at that unsurprising decision, they received a letter from PavCo President and CEO Ken Cretney.

PavCo is an important player in all of this because it owns the stadium and the adjacent chunk of land known as 10C. The decision to remove the viaducts will affect comings and goings for any stadium events, as well as the potential value of that vacant piece of land.

Aside from complaining about the lack of meaningful consultation by the city with PavCo — which I will get to in a minute — Cretney makes another point which is quite startling.

The head of this multi-million dollar government-owned operation says “PavCo does not yet have available financial resources to prepare for and engage in any detailed negotiations in connection with any proposed Viaduct relocation project.”

Be mindful of the fact that according to PavCo’s own undeleted reports they had revenues last year of more than $111 million dollars. Yet here they are crying poor, unable to peel off a few bucks to deal with an issue that will easily make them —and the province — millions.

As for the windfall that the demolition of the viaducts will provide, we have no better source than Todd Stone himself, who is now kvetching that the province and PavCo have not been sufficiently in the loop about the impact of the decision to remove the viaducts.

I direct your attention to the as-yet-undeleted Hansard, the record of the debate in the legislature, dated last April 28.

Stone is being questioned by Vancouver-Point Grey NDP MLA David Eby about the site 10C land and the PavCo budget, which anticipates $15 million in revenue from their sale. Eby wants to know whether removal of the viaducts would drive that number higher.

Stone says, “The discussions are underway, or have been underway for quite some time with the City of Vancouver. We’ll hope to see those discussions move along as quickly as possible. That being said, at this point we are quite confident that the projected estimates here of roughly just north of $50 million is a very reasonable expectation.”

Let me do the math on that one for PavCo. That would put an additional $35 million in their begging bowl.

Now that was six months ago. Last week, immediately after council’s vote to proceed with plans to remove the viaducts, once ensuring costs were covered by future development levies and land sales, Stone told us to “take a breath” that there had been “no meaningful technical discussions” about access to B.C. Place and “we have to make sure concerns we have about the movement of goods are considered.”

But, here’s the thing. In at least two PavCo reports there are references to their discussions with the city on the issue of the viaducts.

Further, the city notes that “over the past two years the City has completed four comprehensive technical studies to develop street designs and construction methodologies which will ensure the ongoing viability of B.C. Place with replacement of the viaducts.”

Further, and this is in response to both the Stone and PavCo CEO Ken Cretney, in the past two years there have been meetings by either city staff or city consultants with PavCo staff, including Brian Griffin, director of Facility Operations and Ken Cretney himself, to discuss these studies “in granular detail,” according to a senior city hall source.

Stone, and those reporting to him, may be in the habit of deleting all incoming and outgoing correspondence, but, as Vancouver Mayor Gregor Robertson told CBC radio, “there is a good paper trail on this.”

• • •
Note: It was not Green Party school trustee Janet Fraser last week who said, in support of the aboriginal school program at Macdonald school, “If this school doesn’t succeed, we don’t want it to be because of something we didn’t do.” That was the equally passionate project supporter Vision trustee Joy Alexander. Mea culpa.