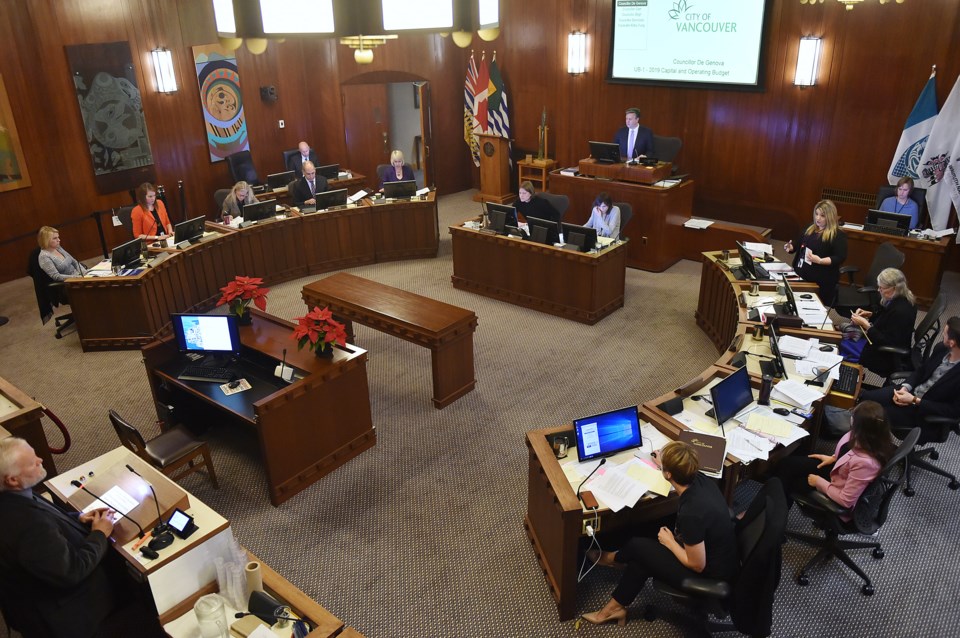 Hands up all of you beginning the new year with a 2.7 per cent pay increase.

OK, I see a few people in the back of the room with their hands in the air.

In fact, I’m certain those faces are familiar to readers.

They should be because they’re your mayor and 10 councillors, the same crew who recently approved a 4.5 per cent property tax increase for this year.

After that revelation, I predict two Vancouver-style responses: Outrage, as in Grampa Simpson shaking his fist at the clouds type of outrage, and disassociated acceptance, as in what hundreds of thousands of Vancouverites practise each civic election when not bothering to cast a ballot.

Some might even think the increase is fair and warranted.

Regardless, this 2.7 per cent bump shouldn’t be viewed as a surprise. Every Jan. 1, as I’ve pointed in previous pieces, the mayor and council of the day get a pay increase. It fluctuates and has involved formulas that factor in the Consumer Price Index, the average weekly wage for B.C. and data from Statistics Canada.

I should note that calculating the mayor’s salary requires more math and involves multiplying the remuneration paid to councillors by a factor of 2.02.

Way back in 1995, an independent panel decided the mayor and councillors needed a raise. Part of the rationale was based on mayors and councillors in other big cities making more cash than the Vancouver crew.

Which, by the way, still holds true today.

In 2016, Vancouver councillors made a move to get them closer to their counterparts in Edmonton and other cities by approving a series of changes to the payroll, which boosted their pay from $71,061 at the beginning of 2016 to $80,029 by the end of 2016.

The city’s Statement of Financial Information for 2016, however, will show councillors’ earnings for the year hovering around the $100,000 mark. That’s because council not only approved an $8,968 boost to their salaries but another “one-time payment” of $8,968 and $3,048 to cover benefits.

All these numbers have probably boggled your mind and might have left you enlightened/crestfallen/nonplussed, maybe even wishing you would have run for a seat at city hall.

But I’m going to guess that for a bunch of you, there is no pay increase coming your way this year. In fact, there probably wasn’t one last year or the year before.

I’m also going to guess your expenses will be greater this year, that your commute time/transportation costs will likely increase and your housing costs—whether it be for rent or bills associated with owning a home—will be more expensive.

My guess work here is based on conversations with family, friends, colleagues and some neighbours.

There was a time when a councillor’s pay was supposed to represent what the average full-time Vancouverite was earning. In fact, up until August of 2018, this short preamble was posted on the salary page of the city’s website:

“Councillors salaries are based on the average earning of Vancouver residents who are employed full-time, using census data for Vancouver.”

I challenged the city on that statement and, not surprisingly, it was removed from the website.

Probably had something to do with the most recent census data showing the median income in 2015 for a one-person household in Vancouver was $38,449 and $89,207 for a household of two or more people. The “total household” median income was $65,327.

So good luck everyone, and Happy New Year!