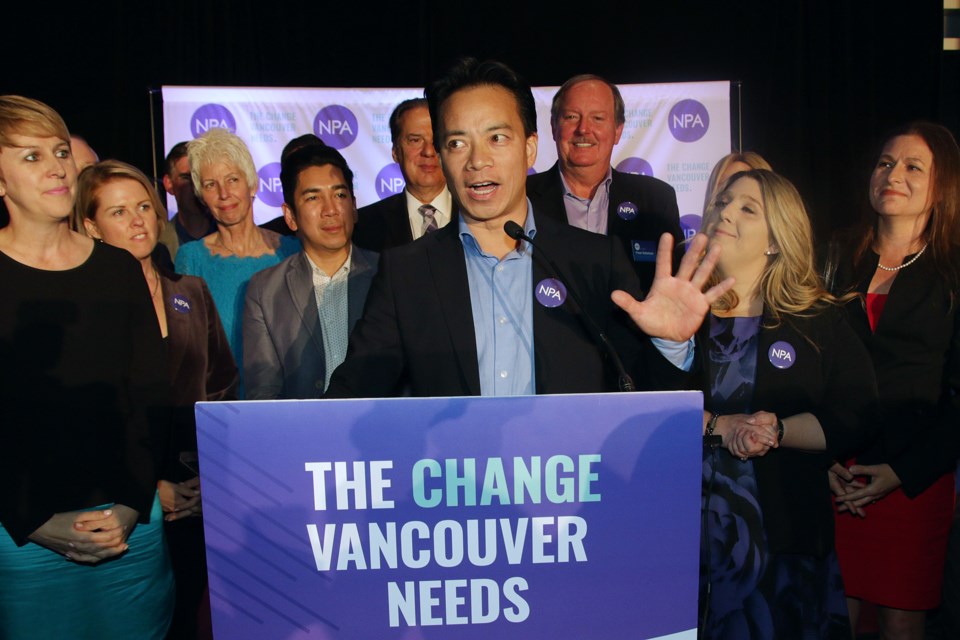 Ken Sim was the NPA’s mayoral candidate in the 2018 civic election and came within 957 votes of being elected mayor. File photo Rob Kruyt

He’s the guy who came within 957 votes of becoming Vancouver’s mayor in the October 2018 civic election.

But some guy named Kennedy Stewart beat him.

“I’d like to run again,” he told me by telephone Thursday while waiting to board a plane in Colorado.

“I’ve been walking around the city for the last year-and-a-half and I’ve met a ton of people. It’s been overwhelming the number of people who were supporters of mine, or didn’t support me, who said I should run again and they would support me.”

Sim was the NPA’s mayoral candidate in 2018. But he wouldn’t say whether a run for mayor would be with that party, another party, or as an independent.

Rumours are circulating that he’s forming his own party.

I asked him to rate the performance of Stewart and his 10-member council, which includes five councillors he ran with in 2018; Rebecca Bligh has since resigned from the party, leaving the NPA with four councillors.

Sim said he didn’t want to point fingers or give letter grades, preferring to answer by saying the city is still a long way out from meeting residents’ needs, including hitting its housing targets.

“Vancouver used to be a place where you could get an education, have a career, start a business, raise a family and enjoy the city,” said Sim, who was born in Vancouver and is married with four children.

“That’s no longer the case for a lot of people.”

Sim’s announcement that he wants to run for mayor when the next election isn’t until the fall of 2022 may seem a little early. But Stewart has already declared he will seek re-election.

Sim made it clear that he is not interested in making a provincial or federal run, acknowledging that elections at both government levels are likely to occur before the civic vote in 2022.

“The reason I ran civically wasn’t to be a politician, it was to make a difference in the city that I love,” said Sim, who was born in Vancouver and is the chairperson of seniors’ care service Nurse Next Door and co-founder of Rosemary Rocksalt Bagels.

Asked why he lost, Sim said this:

“I wouldn’t say I lost. I think I gained some valuable experience and started a conversation. I met over 10,000 people in this city, and I heard so many stories. There are a bunch of people who are super concerned.”

But he didn’t, and Stewart told me Thursday that he welcomes a rematch.

“He’s a real quality guy, I really like Ken, I’ve talked to him a number of times,” Stewart said.

“I think he’s got the best intentions at heart here. That said, I’m going to do a better job than he’ll ever do, so I’m going to run again.”

Until then, both men have to get through 2020, 2021 and most of 2022 before any of this really matters. A week is a long time in politics, never mind three years.

But here we are.