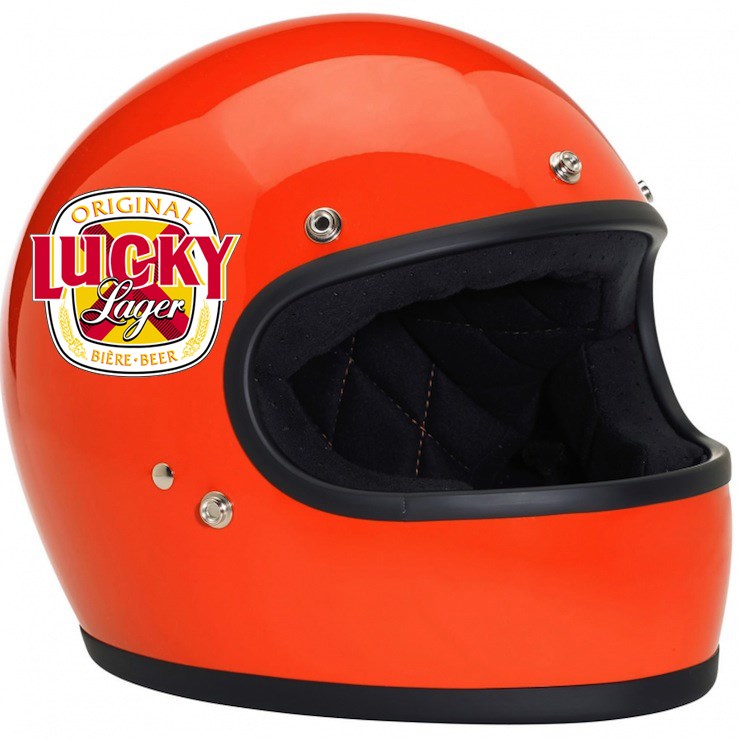 K&K has an aversion to Lucky lager and wearing motorcycle helmets after a traumatic incident in the summer after Grade 10.

For a brief period in the summer after Grade 10 we hung out with a kid who liked to “party” — i.e. hang out at his older brother’s apartment and get wasted with dudes and dudettes who also liked to get wasted instead of, say, go back to school after dropping out, work a job, vacuum the cigarette butts off the carpet or party with more age-appropriate people.

It wasn’t until we heard Led Zeppelin’s “Immigrant Song” playing for the fourth time that evening that we fully appreciated the sketchiness of the situation. But by that time we had already consumed a six-pack of Lucky, put on somebody’s motorcycle helmet and hung off the three storey-balcony announcing we were “The Fall Guy.”

Drinking with your underage brother and his friends in a garbage-strewn apartment with only a cassette tape of Led Zeppelin III is one thing, but apparently hanging from the balcony wearing a motorcycle helmet crosses the line. So we were told to leave.

Once outside and still feeling like Lee Majors on a Lucky bender, we noticed a motorcycle parked on the street, belonging to the owner of our beloved motorcycle helmet, we assumed. That’s when we decided to urinate all over said motorcycle, from its headlight to its exhaust pipe and everything in between, including the handlebars and seat. After that we walked through the parking lot of an Overwaitea, stole a two-litre bottle of Pepsi from the case lot section out front, threw the bottle as high as we could in the air so it smashed on the ground, snuck into our bedroom so as not to disturb our dad, slept for 12 hours and decided to never hang out with our friend or his older brother again.

Sorry, dudes and dudettes, for putting a damper on your partying ways by making asses of ourselves. Sorry, motorcycle helmet owner, for urinating all over you motorcycle, which we’re pretty sure didn’t happen on any episode of The Fall Guy. Sorry, Overwaitea, for stealing a bottle of Pepsi just so we could destroy it instead of enjoying its sugary goodness or giving it to someone in need of refreshment. Sorry, former kid who liked to party with his older brother, for ditching you as a friend because we no longer shared your partying ways when maybe there was more to you than that if we had just looked hard enough, although we doubt it because after you dropped out of school we saw you a few years later bussing tables at Pizza Hut and missing two fingers.