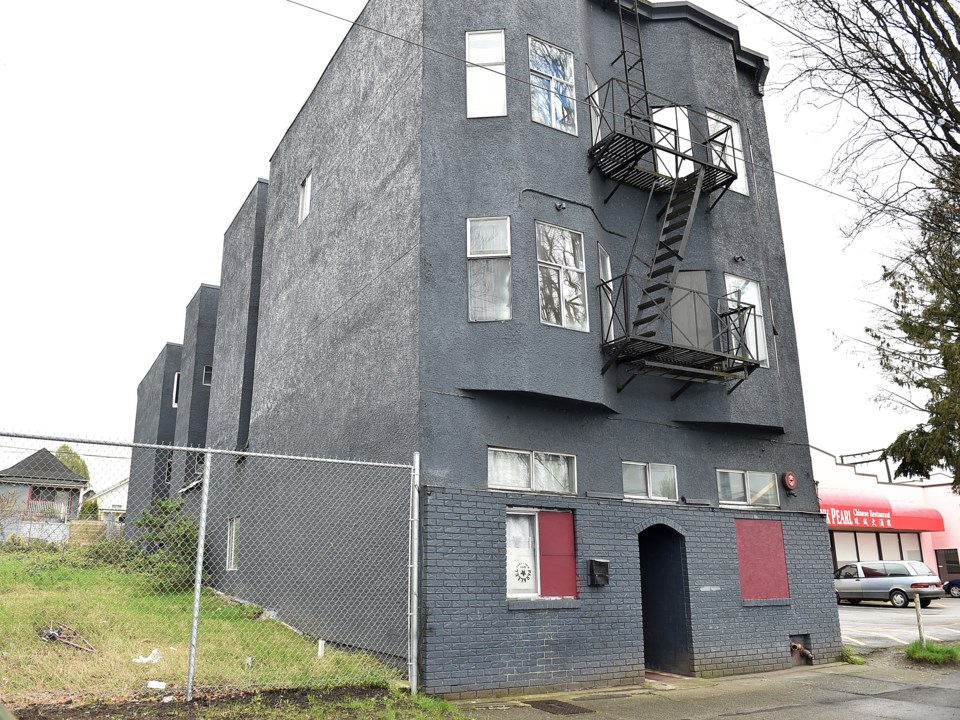 In February, Vancouver police raided the Vernon Apartments at 1168 East Hastings after a 911 caller observed men with guns going into the single-room-occupancy hotel. Photo Dan Toulgoet

Writing about single-room-occupancy hotels in the Downtown Eastside being used as centres to sell drugs and places where people have been stabbed, shot or beaten is not exactly breaking news.

The former Backpackers Inn near Pigeon Park, the old New Wing’s Hotel near Oppenheimer Park, the West Hotel and the Regent are just some that come to mind as scenes of drug-fueled mayhem.

I count at least six murders between three of those hotels since 2005.

Search warrant documents I picked up the other day at Vancouver Provincial Court reveal another hotel in the neighbourhood is a problem for police.

I assume it’s a problem for tenants, too, but I couldn’t get past the front door to find out. It was locked, and there appeared to be no front desk.

The hotel is known as the Vernon Apartments, or Vernon Rooms, located at 1168 East Hastings. If you know your dim sum, it’s the three-storey grey building next to the Pink Pearl restaurant.

On Feb. 5, police seized a .22-calibre “modified rifle,” a .22-calibre magazine, a black stun gun, an “airsoft rifle,” a black machete, a pink collapsible baton and two “surveillance” hard drives from one of the suites.

Earlier that day, police received a 911 call from a woman saying that she observed two men with guns concealed in their pants heading into a single-room-occupancy hotel on East Hastings Street at Vernon Drive.

Police believed the call was related to the Vernon Apartments, pointing out in documents there was no other SRO in that area. A team of four officers, two of whom armed with a carbine rifle and another with a shotgun, responded to the hotel in the early afternoon.

After clearing the first two floors, police came across a man on the third floor who yelled, “Oh shit, police” and quickly ran back into suite number 29, slamming the door behind him.

The man and two other occupants refused to comply with police orders to come out of the suite, which had a camera mounted in the door’s peep hole.

Police observed another five cameras monitoring people coming and going from the building, including one in the hallway and a stairwell, according to the documents.

An emergency response team soon arrived. After some negotiation, three people emerged from the suite, including a woman and two men, whose names were very familiar to police.

The Courier is not naming the occupants because the court registry doesn’t indicate charges were approved against them. A request to VPD to get an update on the case and determine whether drugs were seized had not been returned before this article was posted.

One officer wrote in pursuing a search warrant that “in his experience, suites in single-room-occupancy hotels that have invested significant resources and money in surveillance cameras is consistent with drug trafficking and illicit drugs and have access to weapons including firearms.”

Further investigation by police also suggested the 911 caller was the girlfriend of a man who has had 558 “documented encounters with police,” many of which are related to the drug trade.

The man survived being shot in the face and neck in December 2018 and, according to a VPD detective, “has been violently stealing rival drug dealer’s illicit drugs and trying to expand his territory by any means necessary including violence.”

His girlfriend has 113 “documented encounters with police,” and an RCMP file out of Surrey indicates two Magnum style handguns were seized in a storage locker rented under her name.

“I believe that the 911 caller is [the man’s girlfriend] and that she phoned 911 as she observed two males that are in conflict [with her boyfriend] approach him and then leave the area after attempting to conceal firearms in their pants,” an officer wrote in the documents.

The woman from suite number 29 has convictions for assault with a weapon, aggravated assault, robbery, forcible confinement, carrying a concealed weapon and multiple drug-related charges.

The two other men who were in the suite had a combined 46 encounters with police. One of the men “is of interest to police in relation to gangs, drugs and weapons,” the documents said.

Coincidentally, the hotel was once owned by Dennis Halstead, whose name surfaced in the news this month related to a major drug trafficking operation in the Downtown Eastside.

Police estimated the value of the drugs at $1.8 million.

Halstead owned the Vernon Apartments in 2014 when police embarked on the project. Police named Halstead as the “principal target” and said in court documents that “he was active in supplying drugs to SRO hotels in the Downtown Eastside of Vancouver and more broadly as well.”

Drug charges for possession of cocaine, heroin, methamphetamine and fentanyl for the purpose of trafficking and a charge of possession of a firearm were dropped against Halstead.

Same for co-accused Jason Heyman, who was believed to be the business partner of Halstead and facing seven counts involving possession of drugs and five counts related to unlawful possession of firearms.

Other defendants in the case had their cases resolved by way of plea.

Williams said police improperly obtained passport photos of the men and ruled police weren’t in their rights to take ion swabs of vehicles and a townhouse.

The judge said police prevented Halstead and Heyman from immediately phoning their lawyers after they were arrested. And, he said, police also failed to file reports to the court in a timely manner on the list of items seized in searches.

In ruling that Halstead and Heyman “will not be adjudicated on their merits,” Williams said it was regrettable and that “society deserves a better outcome.”

“The offences alleged are serious, involving large scale, for-profit distribution of controlled substances, including fentanyl and other dangerous drugs, an activity that callously inflicts horrific damage on so many members of the community,” he wrote. “As well, the charges include the unlawful possession of weapons; those too are serious.”

In the end, Williams said the court is charged with the responsibility of preserving public confidence in the rule of law and the administration of justice.

“Where the police commit serious breaches in their investigational activities, considerable harm is done if the courts send the message that such transgressions count for little, or that they can simply be overlooked,” he said.

Halstead no longer owns the hotel, and my research indicates it was sold to another person who recently sold it to PortLiving, a development company.

So are there plans to demolish the hotel and redevelop the land?

It was a question among many that I sent April 12 to PortLiving’s vice-president and the company’s property manager. Today (April 17), I received a brief email from Evan Huie, asset manager for PortLiving, in response to my questions.

This is what he said:

“PortLiving continues to work with the City of Vancouver and local authorities to create a safe environment at 1168 East Hastings Street for the tenants of this building and our employees.”