Mario’s Quarantine Diary, Day 3: How much do you tell your kids about COVID-19

When two journalists share a condo with a 7-year-old, Tri-City News journalist Mario Bartel learns, the challenge is when to watch the news and how much information to share with their son
Mario Bartel Mar 17, 2020 8:38 AM

Tri-City News journalist Mario Bartel is voluntarily self-isolating and working from home for the rest of the month after his wife and son returned March 13 from a brief getaway in Arizona. He is writing a daily diary during that time.

It’s the first work day of our 14-day self-isolation stretch and it’s taking some getting used to — especially with an active and inquisitive seven-year-old sharing our space.

With two journalists in the condo (one former, the other hoping he will still be when all the COVID-19 dust settles), we’re pretty committed news consumers. And while we started recording the nightly six o’clock newscasts for later viewing a few years ago when our son became agitated by Donald Trump’s antics, current events are never far from our daily conversation.

Thus, Oscar has been pretty dialled in to the novel coronavirus crisis since the first reports of a virulent new contagion started coming out of China last December.

We try to answer his questions in as calm and measured a manner as we can, given our own limited knowledge. But it’s tough to know where his line for processing information and fearing it is. The main thing is to keep him feeling safe and loved.

and my wife had to tell him on Thursday they wouldn’t be going to the game between the Vancouver Canucks and Phoenix Coyotes that night after the National Hockey League suspended its season. Instead, he spent the afternoon at the zoo, watching the lions roar and monkeys make faces. It was the best part of his trip, he said, when he arrived home. 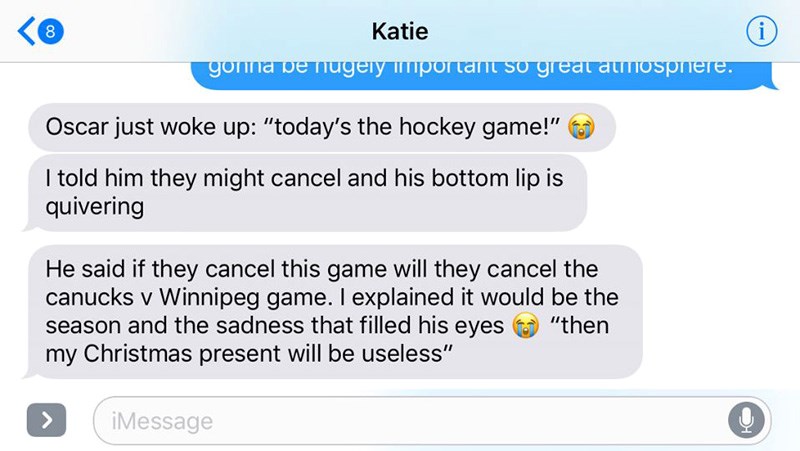 Sunday, Oscar asked why we weren’t watching CBS Sunday Morning — or “Sun News” as he calls it — a 90-minute master class of storytelling and wonderful human interest stories that we try every week not to miss. I told him it wasn’t on that day because I feared it would be a 90-minute alarm of urgent and dire updates from around the globe that would only increase our anxiety.

Turns out I was sort of right: The network chose to air a reprise of its 40th anniversary show last year — because not enough staff were available to put together a regular broadcast.

Miss a day? Catch up here:

Day 2: Doing the right thing at the 25th hour