BC Teachers’ Federation president-elect Teri Mooring takes over her new position in June.
Mar 25, 2019 11:47 AM By: Tracy Sherlock 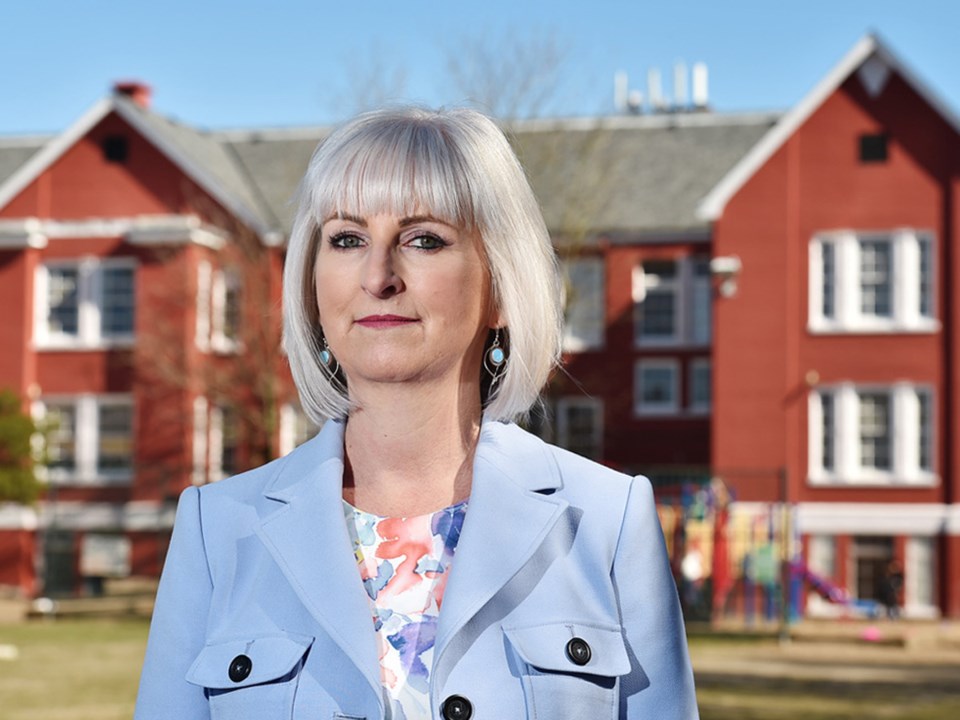 Teri Mooring will become president of the BC Teachers’ Federation in June. Photograph By Dan Toulgoet

Some might think the BC Teachers’ Federation’s new president-elect Teri Mooring has her work cut out for her.

With the first contract negotiations since a bitter five-week strike in 2014 underway and a controversial funding review ongoing, the challenges are clear.

But once you get to know Mooring, even a little bit, you get the sense those hurdles won’t get the best of her.

Mooring, 56, was a Grade 6 and 7 teacher for 20 years at, as she puts it, “a fairly high-needs school,” in Quesnel, a town of about 10,000 people on the road between Williams Lake and Prince George in B.C.’s Cariboo region.

In her teens, she worked at the town’s pulp and paper mill, where her father was the local union president. Her mother was a teacher and she says both parents highly valued education. They always instilled in her the belief that she would need a career and to look after herself.

After high school, she went to the College of New Caledonia in Prince George and then got married and had the first of her three children.

Soon after, she qualified with her teaching certification at the Simon Fraser University campus in Prince George. Teachers didn’t need a full degree at that time, but over the next eight years, she completed hers at SFU and had two more children.

Throughout, she was teaching young adolescents, raising her own children and serving as a union staff representative. After teachers in B.C. unionized in 1988, there wasn’t a year she didn’t have a position within the union, she said.

After finishing her bachelor’s degree, she promised her kids she would wait until they finished Grade 12 before pursuing her master’s degree.

But then the University of Northern B.C. offered a masters in counselling and curriculum and she couldn’t resist.

“I had to do it,” she says. “With apologies to my children.”

Mooring’s two adult children, Josh and Jasmine, live in Dawson Creek. Josh has two daughters, Emma and Sydney. Her youngest child, son Colby, was killed in a car accident at age 17 in 2006.

When she embarked on her educational journey, she says she “never had any inkling” she would be leading the province’s 43,000 teachers one day.

“I never anticipated in a million years that I would end up being the BCTF president,” Mooring said. “I’ve learned not to limit myself. That’s not meant to sound arrogant, it’s just that a lot of unanticipated things have happened along the way that I could never have predicted.”

For fun, Mooring does hot yoga, runs along the seawall and is a passionate reader.

She takes over from BCTF president Glen Hansman when his three-year term ends in June. Hansman and Mooring were both elected as BCTF members at large in 2009.

“It was a different world than what I had known at VESTA in that she was the only person in the Quesnel office, which was a small thing beside the highway with only one way in and out of the office, and where she had to do everything,” Hansman said.

He says Mooring will “do great things as president.”

“Teri knows her values. [She’s] smart, tenacious, articulate, thoughtful, and committed to public education, teachers, teaching as a profession, and the students we serve,” Hansman said.

In the few months remaining before taking over the helm, Mooring is the co-lead negotiator in the teachers’ collective bargaining for their contract, which expires June 30.

“What we are continuing to see, because of that, is that students with special needs are being asked to stay home when their teacher or educational assistant is ill,” she said. “We’re also continuing to see specialist teachers are being pulled from their jobs to fill in for classrooms and that means students with special needs continue to lose out on programming and supports. That’s still an issue everywhere.”

There are hundreds of people teaching in B.C. classrooms today who don’t have a teaching certification — a number that has quadrupled since the teachers’ court win in 2016, Mooring said.

For the first time, BCTF can bargain provincially for class size caps — there is no provincial language for Grades 4 to 12 and some districts don’t have their own rules. As far as the number of students with special needs who can be in a single class, 20 of the province’s 60 districts have no rules, while 20 have really strong rules and another 20 could see improvement, she said. Making that equitable is “key at the negotiation table,” Mooring said.

Earlier this year, the province put a one-year hold on implementing proposed changes to the funding for students with special needs, from a per-student basis to a so-called “prevalence model,” based on averages.

Mooring is very encouraged by the recent doctor’s settlement in B.C., which includes 8.8 per cent increases over three years and contains money for recruitment and retention, she said.

“There’s all kinds of creative things that could be put in place and we’d really like to see some of that,” Mooring said.
Ideas include loan forgiveness, tuition repayment or other strategies to attract teachers to the province.

They’ve held 20 bargaining sessions so far, with 40 more scheduled before the end of June. Mooring is optimistic a deal will be done by then.

“That’s lots of time for us to get a deal,” Mooring said.

The province’s 538,000 public school students, their parents and their teachers all certainly hope she’s right.