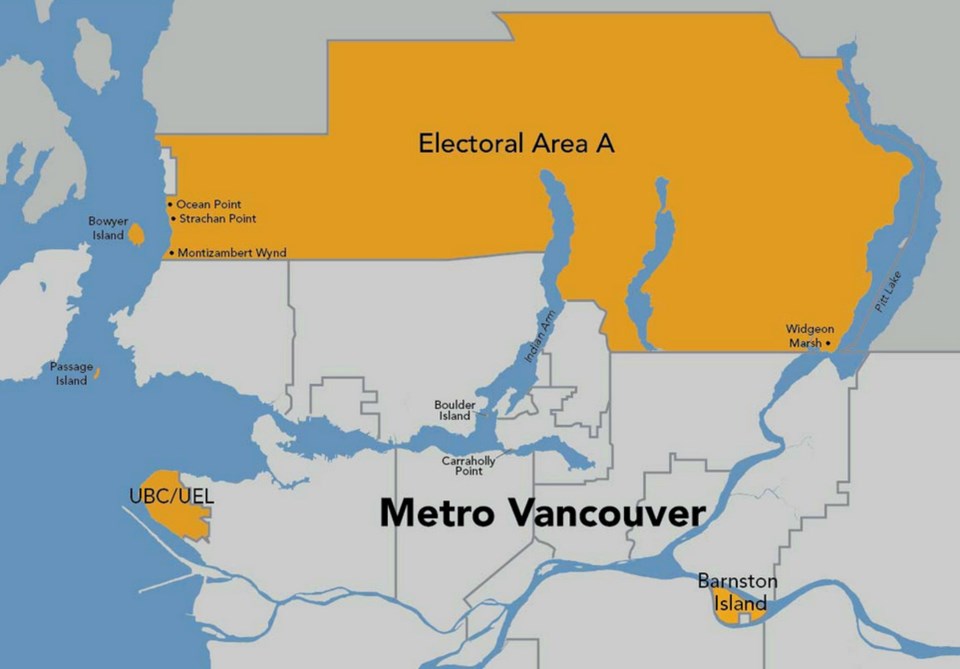 Excited about the upcoming election?

Not the one with Trudeau, Scheer, Singh, May and Bernier.

But the one with de Weerdt, Garvie, McCutcheon, Moore and Wong.

Not ringing a bell?

What the heck is Electoral Area A?

If I’m reading Metro Vancouver’s website correctly, the area occupies approximately 818 square kilometres of land that includes the University of B.C and its neighbourhoods, the University Endowment Lands and some place in West Vancouver called Montizambert Wynd.

The rest of the electoral map is a hodgepodge of communities, running from Bowyer and Passage islands in Howe Sound to the west side of Pitt Lake and south to Barnston Island.

Not exactly pedestrian-friendly for campaigning.

A boat would probably be more suitable. A float plane might be best, although each candidate is limited to spend $7,817.24 during the campaign period and third-party advertising is capped at $750.

Whoever is elected will sit on the Metro Vancouver Regional District board and be paid $24,000 per year. That person will work and vote alongside civic politicians from the Lower Mainland.

The new director will also get a seat on the Mayors’ Council on Regional Transportation, which is a valuable position considering the push from politicians to extend the Broadway subway to UBC.

The job requires some long hours, as Justin LeBlanc discovered after he was acclaimed in the 2018 election. (His pay, by the way, was $11,503 a year at the time. The Metro Board voted last month to increase the salary for the position to $24,000 a year).

LeBlanc resigned in February, citing a heavier than expected workload, according to a story Vancouver Sun reporter Jen Saltman wrote in February. (I left messages for LeBlanc Monday but had not heard back before posting this piece).

In this race, there are 6,970 eligible voters. What percentage will cast a ballot? The 2018 election results give no insight since LeBlanc was acclaimed as the director.

In the 2014 election, Maria Harris won 769 votes to Daniel Wood’s 169 for a voter turnout of about 14 per cent. The majority of ballots—434—were cast at University Hill Secondary school near Thunderbird Stadium.

As mentioned above, five candidates are in this year’s race, including Moore, whose father Greg was the longtime mayor of Port Coquitlam and chairperson of the Metro board.

Moore, 20, is recent a UBC graduate (major in history, minor in First Nations studies) and her family owns a cabin at Pitt Lake, which falls within Electoral Area A.

Asked to identify the central issues facing Area A residents, Moore pointed to high taxes people pay for water services, which she said are 20 per cent more than the average cost to other Metro Vancouver municipalities.

The cost for emergency services in the University Endowment Lands and other areas is also expensive, she said, pointing to the provincial government as the culprit for “downloading” the cost.

“That seems a little bit ridiculous,” said Moore, who acknowledged her father was giving her advice and help in her campaign.

She’s aware why LeBlanc resigned but said she’s ready for the challenge.

“If elected, this will be my job,” Moore said. “So I’ll be able to make it a priority for the residents that live in the area. So I won’t need to divide my time between this job and another job.”

Candidate Sung Yun Wong, 54, described himself as a retired landlord and real estate investor. He said extending the subway to UBC, where he attended school and lived at Hampton Place for six years, is the main issue for him.

“That’s the issue—SkyTrain, and whatever the people tell me,” said the Kitsilano resident, noting he is fluent in Mandarin and Cantonese.

“I know that a large, large part of the residential population of Electoral Area A is Mandarin-speaking, and a lot don’t speak English. So those people need representation.”

Wong said his son just graduated from UBC and his daughter attends the Sauder Schools of Business. Wong also owns a home at Hampton Place.

“You may want to add [to your story] that I carry two cellphones,” he said. “If people have issues, just phone me directly. At all reasonable hours, my phones will be on. I love people phoning me. I love to hear their issues. I love to talk to people.”

That is just a brief insight into two of the five candidates. All their bios and contact information can be viewed here.

So vote—that includes all you eligible voters of Montizambert Wynd, which is I place I’d never heard of until today.