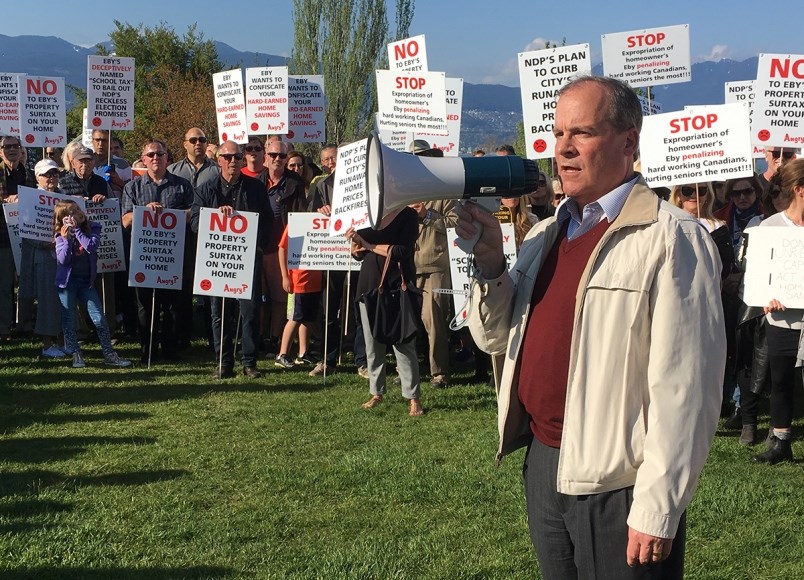 Allen Garr: What the NDP has done in their “eat the rich” approach is create a tax on wealth, which does not now exist in Canada. And, even at that, they have been most clumsy about it. Photo Martha Perkins

This view of mine may surprise some of you but let me start by saying this: The protests against the provincial NDP’s misguided “school tax” will likely continue and so they should.

In case you missed it, this is the surtax the province intends to apply to property tax bills for all houses with an assessed value of over $3 million. If the money to be raised was indeed for schools it would not be dumped, as it will be, into general revenues.

If the crisis we are dealing with is housing affordability, this political ploy may placate those among us who feel disenfranchised in a city where they grew up and have found that the cost to either own or rent a place to live is well beyond their means.

More likely, the social destruction caused by the rapid rise in the cost of real estate will only be exacerbated as a result.

Let’s “eat the rich.” That should divert attention away from whatever failures in providing affordable housing governments may be found complicit.

It was the philosopher Jean Jacques Rousseau who during the French Revolution observed: “When the people shall have nothing more to eat, they will eat the rich.”

We have simply replaced a lack of food with a lack of housing and mostly the left has raised this appetizer with some success at every election.

(There was the anomalous and desperately misinformed proposition from right-wing mayoral wannabe Hector Bremner. He said that our housing problems could be mitigated if we bought up all the big lots in Point Grey and subdivided them up for affordable housing.)

However, what the NDP has done in their “eat the rich” approach is create a tax on wealth, which does not now exist in Canada. And, even at that, they have been most clumsy about it.

You may say that people who live in or own homes worth more than $3 million deserve to be nailed. But you would have to agree that not all of them are filthy rich folks who make their way home in a Rolls Royce. Many of those home owners are stretched as it is because they are either paying off mortgages or are seniors who have simply stayed in place while their real estate values went through the roof and they are now living on a fixed income.

As my colleague Michael Geller has pointed out, the Swiss have a wealth tax which is applied to their property tax bill. But there is a fundamental difference. Wealth is measured as a net value. Mortgages, for example, would be deducted from home values.

When folks kvetch about their inability to pay even more on their property tax, their MLA David Eby says, well you can “defer your taxes”.

Even if you are willing to do that it raises another point. If the idea of jacking up property taxes is to improve the quality of education with a “school tax”, the province will not get any of this cash for years or even decades until the property is sold.

Back in the 1990s when the NDP was in power and Mike Harcourt was premier, he introduced a similar piece of legislation. At the time, he intended to raise property taxes on homes worth $500,000 or more. It took only a week of protests for Harcourt to realize how misguided that would be for all of the reasons cited above.

That is why he is now speaking out against the current “school tax.”

Like others, he is observing that the most effective way to raise additional funds, to eat the rich as it were, would be to simply increase the level of provincial income tax for the top income earners. It would be more accurately focused and the revenue would be more immediately available.

There is one other point. You may have noticed how Mayor Gregor Robertson and his Vision council have remained mute on this issue while their friends in Victoria plunder the property tax pot. Property tax is the principal source of revenue for municipalities and one they are generally hesitant to over use. While a portion of that tax does go to schools, Vancouver already pays more than its share to fund the city’s classrooms.

What the province is doing only adds insult to injury.

*Edit from Allen Garr: My bad. I should have said Rousseau's comment about "eat the rich," among his other observations, strongly influenced the French Revolution.