New Vancouver council in for ‘doozy’ of a meeting 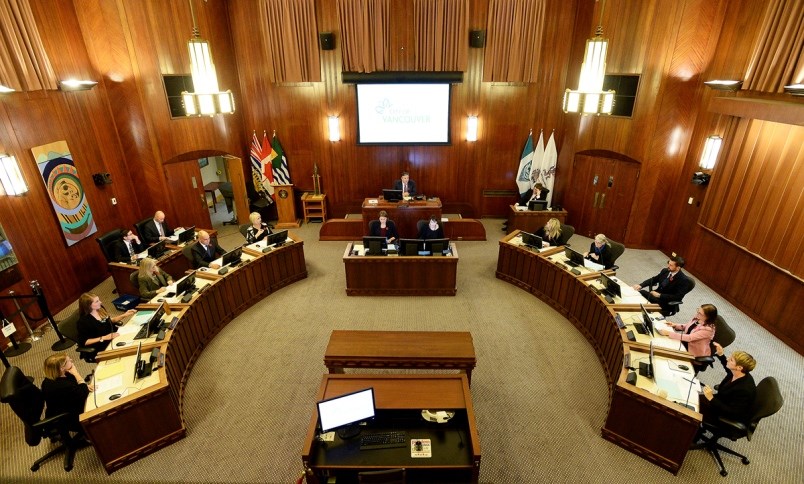 Mayor Kennedy Stewart and the 10-member council will meet Nov. 13 to tackle an agenda that includes motions related to the opioid crisis, a city-wide plan and protections for renters. Photo Jennifer Gauthier

Next Tuesday’s city council meeting is shaping up to be a doozy.

There are no less than 10 motions of notice on the agenda.

Topics include setting up an opioid emergency task force, protecting tenants from “renovictions,” expediting a city-wide plan, creating a renter’s office and ensuring suites at a yet-to-be-built building at 58 West Hastings St. rent for pension and welfare rates.

There’s also a motion authored by NPA Coun. Colleen Hardwick to hold another public hearing to reconsider amendments to a bylaw that allows property owners to build duplexes in most parts of the city.

I wrote about that topic in my previous entry after interviewing Green Party Coun. Adriane Carr on Monday. She told me then, and reiterated Thursday, that she’s still working on a motion to rescind or overturn amendments to the duplex bylaw, despite Hardwick’s motion.

“I think Colleen sort of jumped the gun on me,” said Carr, noting she still has many questions about how council could proceed about rescinding the 7-4 majority vote from Sept. 19.

That vote, to be clear, occurred under the previous Vision Vancouver-dominated council. Vision did not elect or re-elect any candidates to the new council in the Oct. 20 election, which saw the NPA win five seats and the Greens three.

Both parties have been clear they are not against duplexes, but that such a move for the city should be incorporated into a city-wide plan. Carr has also pointed out new duplexes will cost a bundle and not be affordable for many Vancouverites, either wanting to buy or rent.

Carr didn’t rule out making amendments to Hardwick’s motion, but said the feedback she receives from the city’s legal and planning departments will determine her next move.

This week, I left phone and email messages with Hardwick, her assistant and NPA campaign staff but was told she wasn’t available because she was busy getting up to speed with city staff on her new role as a councillor.

In Hardwick’s motion, she said there was “no meaningful consultation” leading up to the vote to allow duplexes, that there was “significant opposition” to amend the bylaw and that then-mayor Gregor Robertson and the majority of councillors who voted for the amendment were not seeking re-election.

So she wants another public hearing.

We’ll find out more on how this goes Tuesday.

If there are any speakers to Hardwick’s motion, council will likely bump the matter to the following day, or a future meeting. Considering the controversy around the September vote, it’s almost a given that a resident or two will want to speak.

Same goes for most of the other motions on the agenda, which are bound to bring out people concerned about “renovictions,” the opioid crisis, the development at 58 West Hastings and the need for a renter’s office.

At the inauguration Monday, Mayor Kennedy Stewart said his approach to governing will be rooted in respect. Many councillors also promised a conciliatory approach as they begin their four-year term.

We’ll get a good sense of what that looks like next week.