No easy fix for Vancouver's addiction crisis, but Swiss model worth examining 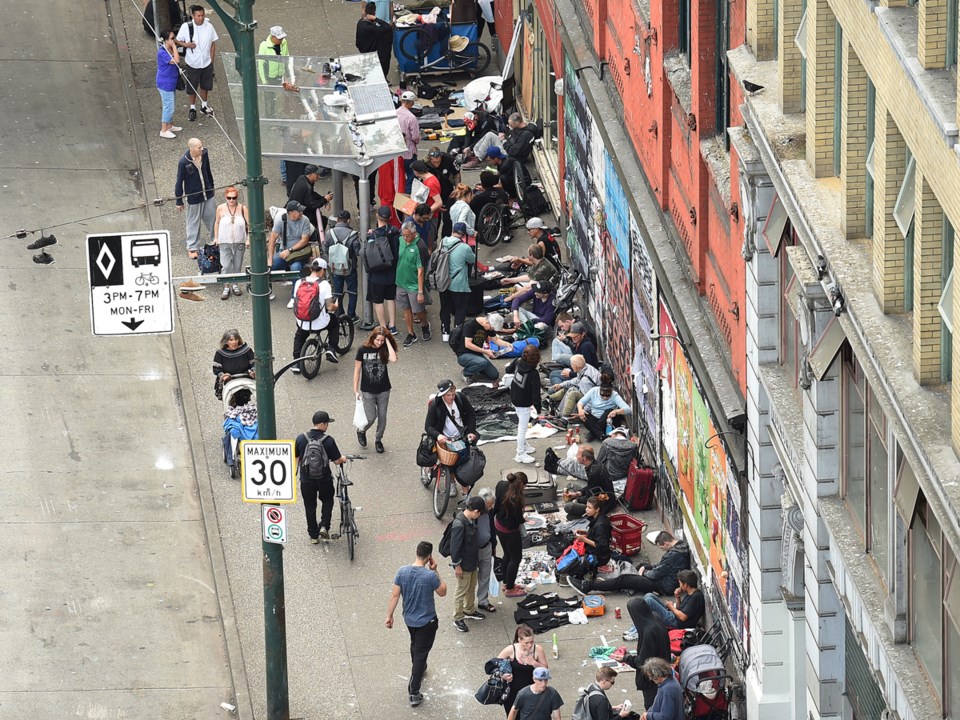 Vancouver’s Downtown Eastside and other drug-ravaged communities across the province could benefit from adopting Switzerland’s approach to tackling the problem. Photo Dan Toulgoet

This colourful narration opened a 1959 episode of Close-Up, a CBC news broadcast featuring legendary reporter Jack Webster as he interviewed a heroin addict and a Vancouver detective about opioid abuse ravaging an estimated 2,000 local addicts, many living in the Downtown Eastside.

During that post-war period, Vancouver was distressed enough about the problem of addictions and the resulting crime it caused that a 1955 Senate committee issued a report on the state of the problem here.

An influential June 1956 editorial followed in the Province newspaper, which pointed out that research showed “again and again that narcotics addiction is a medical problem, not a police problem, and must be dealt with on a medical basis.”

The problem of how to deal with addictions was already evident 65 years ago — treat it like a medical ailment.

Yet, here we are over three generations later, wrestling with the same angst and hopelessness drugs have caused in Canada’s so-called “poorest postal code.”

It is illicit drugs, however, that have the tightest grip on the neighbourhood, and is the leading cause of mortality and property crime across our city.

But if you thought drug addiction only ravaged the Downtown Eastside, think again. There are boroughs in several B.C. towns made less habitable by street drugs and property crime — including in Kelowna, Maple Ridge, Surrey, Penticton, Prince George, Mission and Terrace among other places.

Provincial institutions and local governments can barely keep up as the problems surrounding illicit drugs become more rampant. A week does not go by lately without reports of gang violence shaking communities — particularly south of the Fraser — all related to the drug trade.

Vancouver was once seen as on the cutting edge when it came to addressing addiction and the resulting crime in our midst. But apathy and political expediency have stalled the progress around the Four Pillars initiative, and the SALOME opioid medication project timidly carries on.

When in power, the Conservative party was openly hostile to Vancouver’s lone supervised injection site. Gregor Robertson’s Vision party cut funding for the city’s drug policy office and failed to carry on the four-pillars legacy of its predecessors.

As mayor, Kennedy Stewart has so far shown little interest in dealing with the addictions issue, and has kept his head down on the Oppenheimer Park encampment.

Can you blame the politicians? The two mayors who spent significant political capital to champion bold policies around addictions — Philip Owen and Sam Sullivan — both lost power as a result.

Perhaps we must look to a jurisdiction like Switzerland that once grappled with open drug markets and high mortality rates like we do now, and today sees drug crime and the number of addiction-related deaths plummeting. Using temporary emergency legislation, the Swiss began to provide a clinically controlled clean supply of synthetic heroin to addicts for whom replacement therapy did not work.

Injection centres (including one in a prison) are controlled by the country’s public health system, and spread out among the cantons (states). Reportedly, there has been an “exceptional reduction” in drug-related crime.

Because the heroin is medically prescribed (and one must attend a health centre to get it) the drugs have lost their appeal to young people. The average age of patients is 45 and rising.

Switzerland withstood attacks by political opponents to the addiction programs. In a 2008 referendum, 68 per cent voted to keep its four-pillars policy intact.

Studies found many patients significantly recover in terms of health and social connections, in addition to eventually finding employment.

Will another generation pass before we see fit to tackle B.C.’s addictions crisis? Maybe it’s time for us to look closely at Switzerland’s solution.