Remember when gas cost $1.03 a litre in Metro Vancouver? 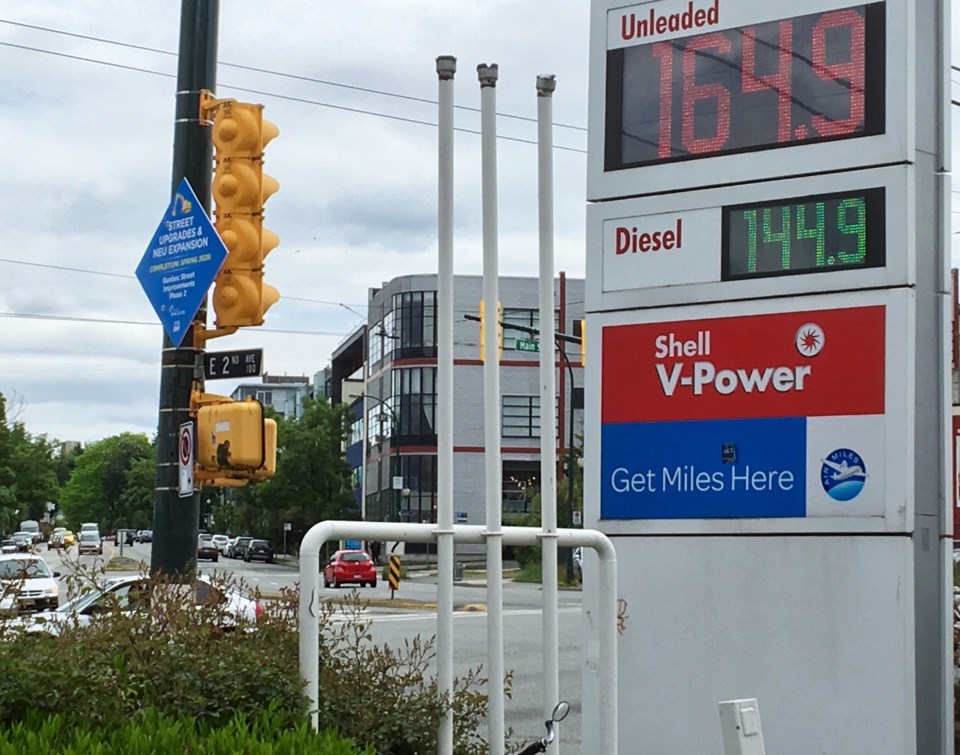 The price of gas in Metro Vancouver continues to soar, with the Canadian Taxpayers Federation demanding action from the provincial and federal governments. Photo Mike Howell

I do, he said with a nostalgic sigh.

I wrote a feature story back then about three people trying to spend less or no money on gas in their commutes from the ‘burbs to their jobs in Vancouver.

Linda Muir from Coquitlam got herself one of the first Smart cars available in town. She also had a West Coast Express train pass.

Ian Torgerson, also from Coquitlam, chose to cycle into work and take the West Coast Express on the return trip home.

Wayne Bowes, after he wrote off his Chevy Corsica in a car accident, became a full-time transit user, taking a combination of bus and SkyTrain from his Surrey home to downtown.

I joined each of them in their commutes and we talked about the price of gas, the environment and the general increase in everything in life and how it was all contributing to people changing their commuting habits.

On my commute to work Friday, my local station was selling gas for $1.70.9 a litre. I drove past the pump because I got “lucky” last week and filled up my tank at $1.60 a litre.

It was a question Linda, Ian and Wayne were asking in 2005 and one the Canadian Taxpayers Federation amplified this week in demanding some action from government.

The federation demanded the B.C. government cancel the carbon tax and reduce the Metro Vancouver TransLink tax to 10 cents per litre.

The federation also wants the federal government to axe the federal excise tax and eliminate “the unfair tax-on-tax.”

Such changes would save Metro Vancouver drivers about 27 cents per litre, the federation estimated.

The reality is such action is not going to happen anytime soon, even though the B.C. minister responsible for jobs, trade and technology acknowledges the unprecedented gas prices.

“It’s undeniable, drivers are getting gouged at the pump,” said Bruce Ralston in an emailed statement to the Courier.

“That’s why Premier [John] Horgan has asked the B.C. Utilities Commission to investigate the huge spike in gas prices in B.C., and why the premier spoke with the prime minister about increasing the flow of refined gasoline through the existing pipeline as opposed to diluted bitumen.”

As for the carbon tax, Ralston said gas prices in Metro Vancouver increased by 40 cents in the last three months and only one cent was due to the tax.

“The other 39 cent increase is going to oil and gas companies, who have been getting away with it without having to answer to British Columbians,” the minister said.

Ralston went on to quote Dr. Werner Antweiler of the UBC Sauder School of Business, who has rejected proposals to cut taxes “because it wouldn’t reduce prices for consumers but would be a giant subsidy to the oil industry.”

Added Ralston: “Additionally, it would result in massive cuts to transit investments, which is the exact wrong direction. Our government will continue working hard to make life more affordable while investing in people and the services they depend on.”

So we’ve got that going for us.

Meanwhile, B.C. Hydro released a report today touting electric vehicles and how much money a motorist could save in their commute from the suburbs to Vancouver.

For example, a 62-kilometre roundtrip from Coquitlam to Vancouver would cost $317 per year in a Nissan Leaf. In a Honda Civic, the cost is estimated at $1,730.

Hands up all those who can afford to buy a new electric car.

Hands up all those who can afford to buy a used electric car.

Hands up all those parents in the city and suburbs with busy children who absolutely could not part with their car, or cars.

Hands up all those people who don’t feel comfortable on a bike in traffic.

Hands up all those people who live in an area where taking transit is a headache.

Those are questions to be explored in another piece, one where I go on and on about the hard lesson of how life is just not fair. Especially for all those hard-working people who want to go green.