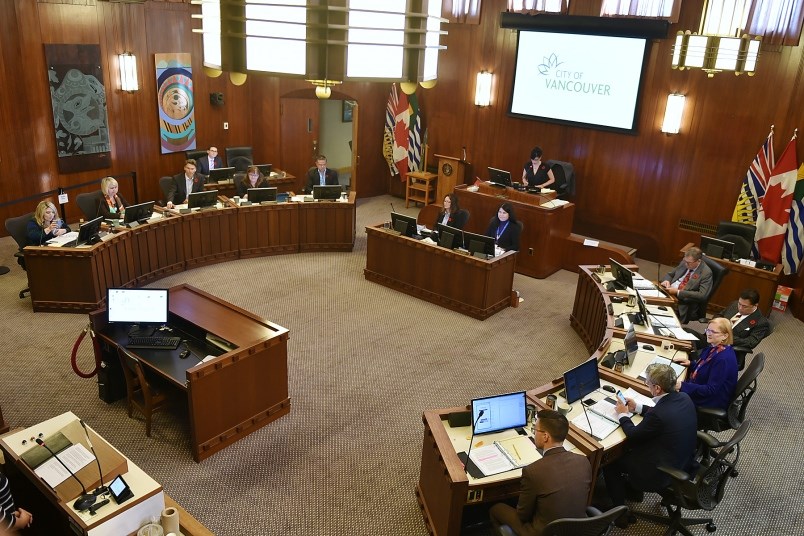 Mayor Gregor Robertson and six city councillors who retire after this fall’s civic election are entitled to a “transition allowance” when they leave office. Photo Dan Toulgoet

Here’s a question that is bound to generate some thoughtful and articulate responses: How much money should Mayor Gregor Robertson and the six city councillors who retire this fall receive on their way out the door?

Expected answer number one: Nothing.

The fact is, Robertson and the six councillors who retire after the Oct. 20 election are entitled to some cash to help them “transition” into whatever it is they do post-politics. I’ll tell you why in a few sentences, but thought I’d get right to the dollar amounts.

Vision Vancouver councillors Tim Stevenson and Raymond Louie, who were both elected way back in 2002 as members of COPE, will each receive $19,114.47. Their Vision mates, Andrea Reimer and Kerry Jang, will pick up $13,202.51 each.

NPA councillors George Affleck and Elizabeth Ball will receive $9,670.64 each.

The four councillors who want to stick around for another term—the NPA’s Melissa De Genova, the Greens’ Adriane Carr, Vision’s Heather Deal and Yes Vancouver’s Hector Bremner—will all be entitled to a payout, too, if they lose their re-election bids.

I should note reporter Bob Mackin did the heavy lifting to get these figures and posted a story on The Breaker June 28, when I was in America on a holiday.

Back on Feb. 24 of 2016, council unanimously approved a “transition allowance” as part of a bigger package that included a salary increase that boosted councillors to $82,000 per year. They also approved a one-time lump sum of $8,968 to cover off their past year on the job and an additional $3,000 for extended health benefits.

The increases were based on a review conducted by a committee that examined what other councillors across this great land earn for doing the people’s work. I won’t list the salaries of all city councils here because I’ve written about this before. But know that councillors in Ottawa ($93,999) and Winnipeg ($89,346) make a better living than the Vancouver crew.

Anyway, my focus of this piece was supposed to be about the “transition allowance.” So here’s the condensed, edited version of the committee’s rationale for the allowance:

A few days ago, I circulated an email to the mayor and retiring councillors to have them justify their retirement allowances. I heard from Reimer, Affleck and Robertson, all via email.

Reimer:  “The fact that I am answering this at 2:15 a.m., and I started work today at 8:30 a.m.—and this is a pretty average day—probably tells you that a salary increase from what was considered part-time wages was justified. However, the point of appointing third party HR professionals to an independent committee was to get their advice, so I thought it was important that we take it.”

Affleck: “Well, I voted against it at the time.”

Then he emailed me a piece I wrote about the vote back in 2016. What Affleck voted against was a pay increase. So did Reimer. The minutes of the meeting, however, show that both of them and the rest of council were unanimous in voting for the transition allowance.

All this talk about a “transition allowance” will be familiar to regular readers, who will recall the hubbub created in March by the majority of Metro Vancouver’s board of directors, which includes several Vancouver city councillors, who voted themselves a pay increase and retirement allowance.

Public backlash caused the board to rescind the vote and agree to create an independent panel to review the remuneration of directors. Whatever happens with that effort will go before a new board after the civic election.

I’ve got a couple other things I wanted to point out before I stop typing and take a summer break.

Someone at the city might want to update that info.

Second, and what really mystifies me, is this short preamble on the salary page: “Councillor salaries are based on the average earning of Vancouver residents who are employed full-time, using census data for Vancouver.”

If that statement is correct, and the average earning of a Vancouverite working full-time is at least 82K per year, then here’s a question: Why are so many people complaining about low pay and how unaffordable this city is?

Someone at the city, or some expert analyst of census data, please tell me this is a mistake—that 82K is not the average salary for a full-time employee in Vancouver. If it is, many workers in this city have a long way to go to becoming average.

Good luck everybody, see you in September.