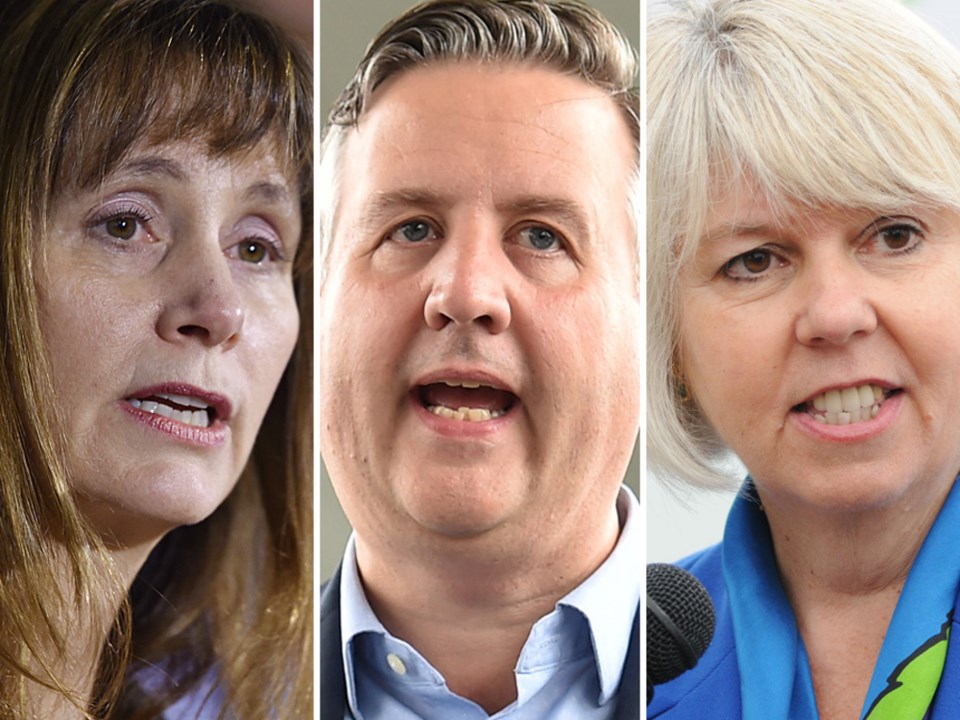 Independent mayoral candidates Shauna Sylvester and Kennedy Stewart will not get an endorsement from Coun. Adriane Carr and the Green Party. Photo Dan Toulgoet

Some of you may be wondering if there will come a time before the Oct. 20 civic election when the Green Party of Vancouver will endorse one of the 21 mayoral candidates.

Stop wondering because it’s not going to happen.

The party made that clear a few months ago and reaffirmed their position this week.

But that hasn’t stopped independent mayoral candidates Shauna Sylvester and Kennedy Stewart, who would most benefit from such an endorsement, from saying nice things about the Greens and their housing platform.

In fact, Sylvester showed up to the Greens’ news conference Thursday to hear more about the platform. She even shot video of some of it and posted it to Facebook. Here’s part of what she wrote to accompany the video:

Sylvester said pretty much the same thing when I asked her what she was doing at the news conference.

“I was here to listen,” she said. “I think it’s the best housing platform that’s emerged in the last month. I’ve been looking anxiously to see a platform that really understands the nature of the problem.”

Better than your housing platform?

“There’s some new things here that I’ve been waiting to hear, and there’s also a number of things in this platform that reinforces what I’ve said – need for housing authorities, renewing the leases on co-ops, a focus on purpose built rental…”

Stewart wasn’t there but took to Twitter fairly quickly after the news conference, writing:

“Like my housing platform, the @VanGreens plan addresses speculation while building homes for people who live and work here. Voters deserve a city hall that works together to make #Vancouver affordable for everyone. As Mayor, I would be proud to help deliver on this plan.”

He wasn’t done there, sending out another tweet. In this one, he quoted Green Party Coun. Adriane Carr. Her quote: “We need to be bolder but practical, demand more from developers, use every tool within our jurisdiction, and implore senior governments to invest more in housing.”

Stewart wrote: “This is the kind of #progressive leadership we need at #vanpoli city council.”

The praise from Sylvester and Stewart is not surprising when considering a Research Co. poll released earlier this month showed 46 per cent of respondents said they would “definitely” or “probably” consider voting for Green candidates.

The party has also emerged as a force in recent elections, with candidates elected to council (Carr), school board (Janet Fraser, Estrellita Gonzalez and Judy Zaichowsky) and park board (Stuart Mackinnon and Michael Wiebe).

So far, Stewart has the backing of OneCity, and he had kind words for Jean Swanson of COPE and Vision when speaking at the recent Courier-Business in Vancouver-Vancouver Is Awesome mayoral debate. He didn’t mention the Greens at the time.

Sylvester has yet to receive an endorsement from a party, although NPA Coun. George Affleck is a fan. Yes, an NPA guy, albeit a retiring NPA guy who has shown via Twitter that he is not a fan of Stewart.

“This isn’t necessarily an endorsement but I can say with confidence that Shauna is no longer a Visionista. I’ve known her for 20 years. She’s an intelligent and strong woman. Please try looking past her brief connections to VV and base your decision on her actual qualifications.”

That “brief connection” he referred to was when Sylvester was a Vision board member, which she said ended in 2011. She was also a co-founder of “Women in Vision.” On the topic of connections, up until a few weeks ago, Stewart was still a serving NDP MP for Burnaby-South.

Both candidates really, really want to become Vancouver’s next mayor.

But they’ll have to do it without the Greens’ support, although Carr made it clear Thursday that if re-elected she and the party's other council candidates – Pete Fry, Michael Wiebe and David Wong – will work with whomever becomes mayor for the betterment of the city.

“We work across all party lines,” Carr said. “Greens are quite well known for not being left or right, but out front and ahead. We draw support from across the political spectrum and recognize that, and value that.”

Then she added: “To signal support for any one candidate shuts the door on the starting point of collaboration.”