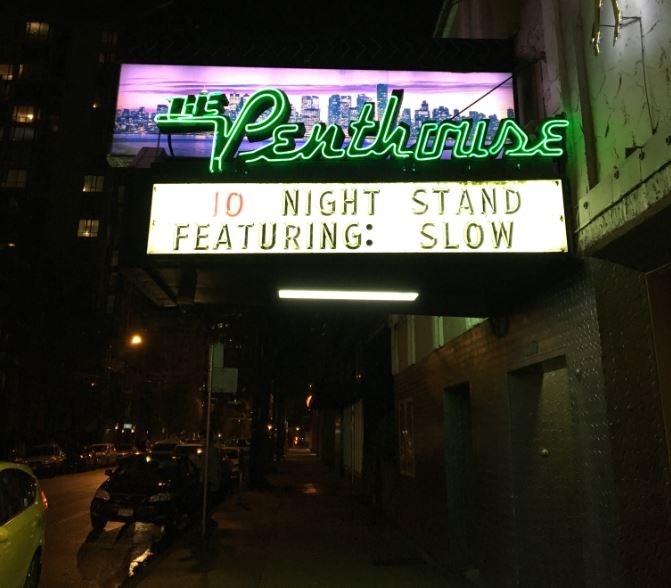 It was a stroke of rock ‘n’ roll propaganda soaked in hubris that would have made Malcolm McLaren proud. After a weekend of wildly successful reunion shows at the Fox Cabaret in December, the recently reformed Vancouver band Slow upped the ante considerably when they announced a 10-night stand at the Penthouse Nightclub on Seymour Street from March 30 to April 8.

In other words: Vancouver’s most notorious band was set to perform at Vancouver’s most notorious venue. A perfect storm or a recipe for rock ‘n’ roll disaster? Skeptics in the scene thought the band was crazy for attempting such a stunt. These guys are all cresting 50 years old. Ten nights straight of pounding, howling, propulsive rock? How would Tom Anselmi’s famously guttural bellow hold up? How would bassist Stephen Hamm’s arms not fall off? How would drummer Terry Russell not keel over by night three?

Amazingly, none of this happened. What did happen was — true to Slow’s ridiculous ambition, which somehow lay dormant for 30 years — the band rose up like a defiant phoenix to deliver a string of detonating shows many of this city’s rock ‘n’ roll fans will never forget.

I was lucky enough to attend the final night on Sunday, April 8. I was excited, but I wasn’t sure what to expect. As I stepped into the legendary nightclub and climbed its carpeted stairs, I immediately crossed paths with Anselmi, Slow’s lead singer. To my surprise, after nine straight nights, his voice sounded perfectly fine and strong, a great sign for the night ahead.

The crowd was led into a rarely used, private pair of small rooms painted black on the top floor of the venue, an area usually reserved for the many Hollywood films that shoot within the club’s storied walls. A low-rise stage was set up against translucent windows, which allowed the coloured lights from the club’s famous neon sign to bleed through onto the stage.

The crammed audience was an A to Z of the local scene: over in that corner was author, musician, Courier contributor and MC for the evening Aaron Chapman. Over in that other corner was Zachary Gray, lead singer of the Zolas. Also spotted was Vancouver Sun scribe John Mackie, guitarist/barber Rich Hope, Doug Donut from Death Sentence, Zulu Records owner Grant McDonagh and No Sinner’s Colleen Rennison, who would later join Slow on stage for an absolutely blistering, paint-peeling version of AC/DC’s “If You Want Blood, You Got It” — a highlight of the night.

Chapman, who literally wrote the book on the Penthouse (Liquor, Lust and the Law), kicked off the evening with a fun on-stage welcome and Q&A with Penthouse owner and raconteur Danny Filippone. Minutes later, most of Slow took the stage — drummer Russell, bassist Hamm, guitarists Ziggy Sigmund and Christian Thorvaldson, and well as additional back-up singers Jody Glenham and Vanessa Dandurand, and multi-instrumentalist Kurt Dahl on everything from keyboards to saxophone. The set began with a warm up of surf and rock ‘n’ roll instrumentals, before Anselmi took to the stage and the band, simply put, exploded.

I’ve been lucky enough to experience a few transformative nights in clubs painted black in downtown Vancouver, and as Slow swaggered loudly from song to song, I quickly realized this was another one of those nights. The band sounded absolutely incredible in the intimacy of the room, immediately igniting a dance party and shaking the dust from the Penthouse walls.

I found myself leaning over to Mystery Machine member Shane Ward, both of us questioning whether the 70-year-old beams and joists of the Penthouse could withstand 10 straight nights of pounding from Slow and their fans.

Although the building was bouncing along with the rest of us, the floor held up, just like the band members themselves. On night 10, Anselmi’s singing was indeed full of power, as the band blasted through songs old and new, the highlights of course being their seminal hits “Have Not Been the Same” and “I Broke the Circle.” The band reached its most fevered pitch on the surf/grunge/punk coughing classic “Bad Man” from Slow’s 1986 EP Against the Glass. Total fury.

Each night of the run featured special guests joining the band, a salute to the alternative Vancouver music and arts scene through the decades. On the final night, besides Rennison, Jazzmanian Devils frontman Dennis Mills jumped up, as did Heather Haley from the Zealots. Both delivered spirited performances.

The show came to its fiery conclusion on an encore of the Stooges’ “No Fun.” When the audience stumbled happily down the stairs, out the front doors of the Penthouse and onto the rain-soaked sidewalk of Seymour Street, all of us knew we had witnessed the end of a run shows that will go down in Vancouver rock ‘n’ roll history, something that seems to come naturally for Slow.