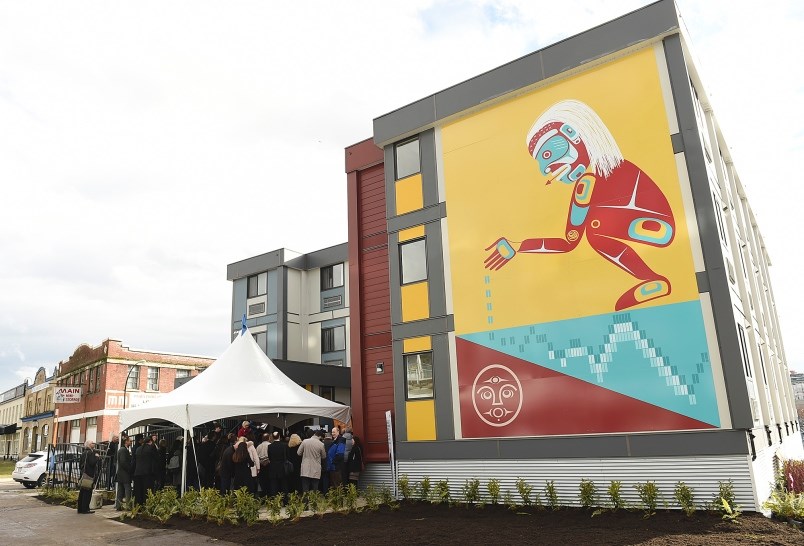 A 40-unit modular housing complex for poor Vancouverites just opened at Main and Terminal. Columnist Alia Dharssi says 40 units seem paltry when considering that Vancouver has more homeless people than ever before and that their needs are growing and urgent. Photo Dan Toulgoet

As a Vancouverite who has spent most of the past seven years living in other parts of Canada and abroad, there are three things I usually notice when I come home. First, I always forget just how breathtaking the mountains are. Second, my eyes are drawn to the ever-changing skyline, its angles and lines shifting with new apartment buildings. And, third, I see people sleeping on street corners that I don’t remember being used by homeless people in years past.

Mountains, condos and poverty — it’s a funny combination of things that catches my eye in one of the world’s “most livable” cities. But it’s also representative of what Vancouver has become — a stunning city with growing economic divisions.

I thought of this last week when I learned that rents in Vancouver have hit a record high. The average rent for a one-bedroom apartment in the city now sits at $1,900 per month — a number that firmly maintains Vancouver’s unofficial ranking as the most expensive city to be a tenant in Canada.

I remembered the economic divisions again, just one day later, at a press conference for the official opening of a new housing development on Terminal Avenue across from the Main Street-Science World SkyTrain station.

Built in under six months to provide accommodation for 40 poor Vancouverites while permanent social housing is in the works, it was touted by government officials as an “innovative” response to Vancouver’s affordability crisis. In fact, Jean-Yves Duclos, federal minister of families, children and social development, told reporters he hopes it will serve as a model for cities across Canada.

Even so, 40 units seem paltry when considering that Vancouver has more homeless people than ever before and that their needs are growing and urgent. As rents soar, basic welfare rates for the poorest are stuck at $610 per month and haven’t risen since 2007.

“People lose capacity to continue moving forward in their lives,” says Jeremy Hunka, spokesperson for the Union Gospel Mission, which has been hosting more seniors and families with young children in their shelters. “They feel forgotten.”

Even the provincial government’s commitment to build an additional 5,300 units of affordable housing in B.C., as outlined in its 2017 budget on Tuesday, will only make a dent in the problem. Metro Vancouver alone has a waitlist of 10,000 for social housing.

And, as all Vancouverites know, these struggles are just the tip of the iceberg. In one way or another, many are feeling the pinch. Stories abound of millennials fleeing Vancouver for cheaper pastures or struggling to raise a family in the city.

Vancouver is “looking more and more like a generational ghost town when it comes to how younger residents can think about raising a family,” says Paul Kershaw, a UBC professor and founder of the advocacy group Generation Squeeze.

The bottom line is that, even as Vancouver prides itself on being a welcoming and diverse city, it is becoming less and less inclusive on one important measure: class. Solving the affordability crisis, then, is about more than putting a roof over everyone’s heads. It’s about maintaining and increasing Vancouver’s social diversity.

With a provincial election coming up in May and the federal government due to release a national housing strategy in the coming months, it’s time for officials to break with the status quo.

One way they could do so is by recognizing housing as a right. In Canada, it isn’t one. According to DJ Larkin, a lawyer and housing campaigner at Pivot Legal Society, this “leads to [housing] being treated either as a commodity or as an optional service.”

“That means you can politicize access to social housing,” Larkin adds. “It makes it easier to demolish low income housing without having replacements and relocation plans in place.”

Writing housing rights into law would force officials to guarantee housing for those, such as seniors and people with disabilities on fixed incomes, who can’t afford it on the market. Currently, they’re among the hardest hit — almost a third of those identified by Vancouver’s 2016 homeless count had a disability.

Second, policy makers could look to ideas about how to make housing markets work better for new buyers. “Homes first, investments second,” suggests Kershaw. He co-authored a paper that, among other solutions, advocates for a “speculation tax” to discourage investors from flipping homes and leave more houses on the market for those looking for a home.

Another way to make Vancouver inclusive, he says, would be to rethink zoning rules to encourage more density so that there are more homes available to new buyers. And these are just a few of many ideas Canadian researchers and housing advocates, including Kershaw, have been debating for years.

It’s time for our elected officials to tap into this thinking and do more than pour money into social housing schemes. Instead, they should redefine how we think of housing in Canada and the way it fits into the structure of our cities.