I woke up on a recent Sunday morning to an unusual invitation. “Lol. My friend wants to know if we want to go to a mansion party in Shaughnessy,” read the text.
Apr 18, 2016 12:09 PM By: Jessica Barrett 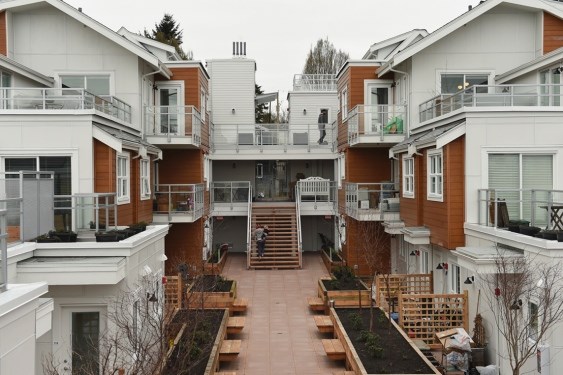 I woke up on a recent Sunday morning to an unusual invitation.

“Lol. My friend wants to know if we want to go to a mansion party in Shaughnessy,” read the text. “He says there's a bar, and a pool, and workshops, and a bar!”

I already had plans and thus had to turn down the invite, but, curiosity piqued, I met up with my friend later for the low-down. Mansion parties in Shaughnessy are a thing now, apparently. But they're not being hosted by nouveau riche boogeymen buoyed by foreign capital. Rather a different kind of resident is populating these sprawling abodes and breathing new life into the near ghost town of a neighbourhood.

This particular house was shared among 20 people who found, in one of city's ritziest neighbourhoods, a rather ingenious affordable housing opportunity. Together, they could easily afford the $10,000 monthly rent while enjoying much more living space than they could ever hope to afford individually. (Then there's the added perk of mansion living in that you're so far away from your neighbours that throwing an all-day rager barely registers.)

Of course, young people embracing communal living to cut down on costs is an old story. In Vancouver, anyone under 40 is by necessity an expert at figuring out alternative housing arrangements. Compared to some of the other home-spun solutions I've come across — such as repurposing “extra” space like bathrooms into bedrooms, or living in one's van — getting comfy with a double-digit number of roommates is definitely one of the better options.

The trouble is, our culture and our systems aren't set up to support this style of shared housing in any official capacity. In fact, they're often hostile to it.

A friend who shares a rental house in Strathcona with his partner and three other roommates, all professionals in their late 20s and 30s, reports that the relationship challenges of living in a high-volume household pale in comparison to navigating bureaucracies built for a culture clinging by its fingernails to a self-contained mode living. An example: when the fridge began bursting at the seams, he and his housemates were able to settle on a system of buying bulk, farm fresh eggs in order to conserve both money and kitchen space. But when they went shopping for tenants' insurance they couldn't find any financial institution willing to insure a home with so many unrelated adults. The verdict was that the home was too insecure with so many people coming and going.

When Vancouver's first co-housing development opened in March, it provided a great example of citizens taking matters into their own hands and investing in a long-term community rather than simple equity. Unfortunately, by the time the owners completed four years of negotiation and planning, the price tag for larger, family-friendly units came in at nearly $800,000, putting them squarely out of reach of most young families.

That's really a shame, since this is a group that is all too happy to swap square-footage for the chance to put down roots in Vancouver, as long as they have access to the amenities that are often neglected in multi-unit dwellings: gardens, outdoor children's play spaces, storage, and workshops — not to mention a ground-oriented layout that's conducive to actual interaction with neighbours. People are desperate for this, it's why waitlists for the city's aging housing co-ops are years long and landing a spot in one is akin to winning the lottery. For a population increasingly fine-tuning their exit strategies, a degree of communal living and common space can mean the difference between a viable future in Vancouver or not.

But this is a detail not high on the lists for developers, nor the city, which has just released a new plan for an affordable home ownership program that seems heavily slanted toward segmented, condominium-style living. Nor are community-oriented designs, such as townhouses, welcome in many of Vancouver's single-family neighbourhoods, where any form of density is automatically met with vehement protest.

As the affordability crisis tightens its grip on Vancouver, a glaring hypocrisy has emerged. We are told the era of single-family housing is over and gone, yet it is only my generation that is constantly, and condescendingly, counselled to abandon our dreams of owning a house. At the same time, we're faced with the pervasive expectation that we will one day grow up, grow out of the “roommate phase,” and move heaven and earth to secure a postage-stamp piece of real estate that doesn't meet our needs. Those who envision a form of communal living not as a sacrifice, but as a desirable long-term strategy still meet hurdles at almost every turn.

Pity, since if Vancouver is to have any hope of retaining its young people, and maintaining its heart and soul, we are all going have to learn to share. And as my friend who attended the mansion party can attest, we might even find there's fun to be had along the way.