‘Friendly amendments,’ more recesses than a primary school and something called ‘spatial justice’ made for insightful week
Nov 18, 2018 1:06 PM By: Mike Howell 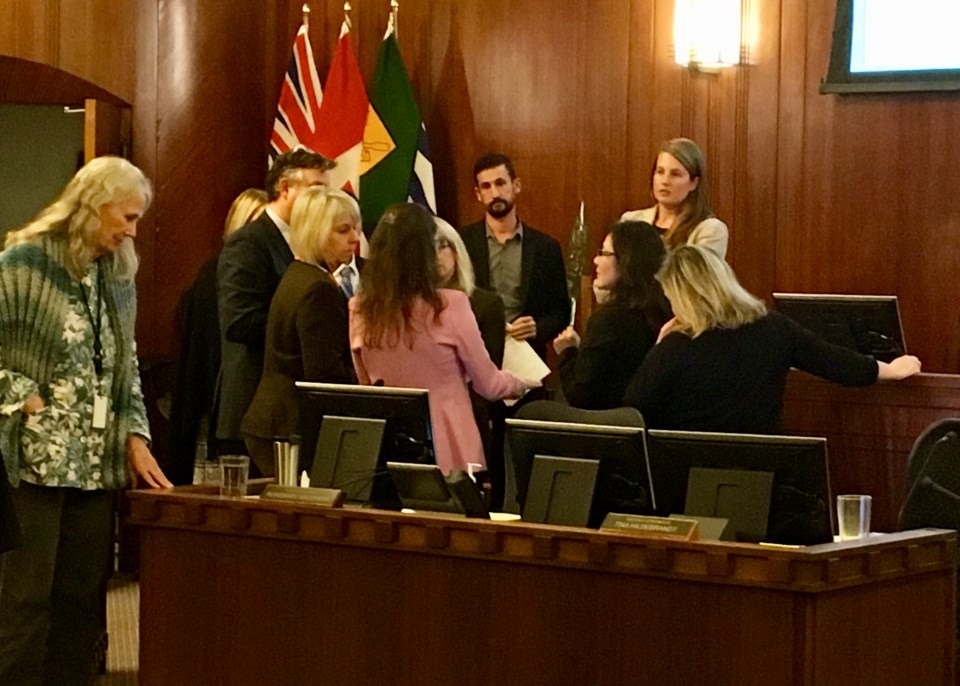 Vancouver’s newly minted city council, which was sworn in Nov. 5, listens to deputy city clerk Rosemary Hagiwara during one of many recesses in first full week of public meetings. Photo Mike Howell

So your new mayor and city council survived their first full week of public meetings.

They worked some long days and nights and heard from dozens of speakers on important issues to this city, including the opioid crisis, renters’ rights, fighting for social housing and developing a city-wide plan.

They all seemed to get along and were self-congratulatory in their efforts to reach compromise on most items, although a debate on rescinding the previous council’s vote on allowing duplexes across most of the city got a little frosty.

You can read my report here.

Governance and when to introduce a motion, when to stand up or stay seated while speaking and other fun parliamentary procedure stuff is admittedly for some of the rookies a work in progress.

In the meantime, some observations of the week that was:

·      There were more recesses than allowed at a primary school.

·      City clerk Katrina Leckovic and deputy clerk Rosemary Hagiwara, who were present to steer the mostly rookie council through the meetings, are very, very patient people.

·      If you were playing a drinking game that forced you to pour one back every time the word “amendment” was said, you’d be in the drunk tank, or worse.

·      Evidence to support those first two observations brought to you by Green Party Coun. Adriane Carr: “Let’s just have a two-minute recess and the people whose amendments and amendments to amendments can get together to resolve this.”

·      “Friendly amendment” is still a funny phrase and probably better suited as the name of an earnest folk duo from the U.S.

·      COPE Coun. Jean Swanson likes to knit at her desk in between introducing motions and challenging others. She also has the most vocal support from the gallery, as the hoots and applause showed.

·      NPA Coun. Melissa De Genova, who was re-elected Oct. 20, has not lost her love for requesting a point of order. She also made it quite clear—a few times—that her microphone used to get cut off regularly under the previous Vision Vancouver-led regime.

·      Green Party Coun. Pete Fry used the term “spatial justice.” To which Swanson asked: “What’s that?” Fry’s response: “It’s the notion of shared space for the commons.” Fry described himself as a “word nerd.”

·      Phrases used by city manager Sadhu Johnston to describe the series of motions and amendments made on the fly during the three full days and nights in the council chamber: Very irregular, not standard, substantive changes is abnormal.

·      NPA councillors De Genova and Sarah Kirby-Yung are both married to police officers, which will make for interesting debates concerning policing—as was hinted during debate over the need for an opioid task force when Swanson said “one of the concrete things we need is for the police to stop criminalizing and stigmatizing people who use drugs.”

·      Boyle, an ally to Swanson, attempted to get council to make “a statement” regarding Toronto writer and activist Desmond Cole’s social media post saying he was stopped by a Vancouver police officer because he was black. Cole was in town to speak at a conference about the struggle for racial equity. After some back-and-forth in the chamber, Boyle agreed to bring forward a motion at another time. Police have disputed Cole’s claim.

·      Mayor Kennedy Stewart’s political and diplomatic acumen will be tested as chairperson of the Vancouver Police Board in dealing with police issues raised by councillors.

·      By my count, council took almost 30 minutes to vary one item on the agenda; the previous council would normally take a minute or two.

·      So far, none of the councillors are providing spicy commentary via Twitter during the meetings like Andrea Reimer and George Affleck used to do.

·      I don’t believe words or phrases such as dialoguing, holistic approach, place-making, right-sizing or intersectionality were used during the three days of meetings, which was good news for regular folk (including reporters and editors) who favour simple, easily understood words over jargon and vague buzzwords.

·      That said, one councillor did talk about “building social licence.” And it wasn’t Pete Fry. Kirby-Yung please provide definition for my boss and general public.

·      Final observation: The media table is still of the deep vein thrombosis-inducing kind of design and the cost of security on council days must be pricey.

·      Final, final observation: Some reporters’ minds tend to wander at the end of a busy week and they write the craziest stuff.

The next regular council meeting is scheduled for Dec. 4.