Understand blockchain? Do I have to? Or is it just here, like the internet? 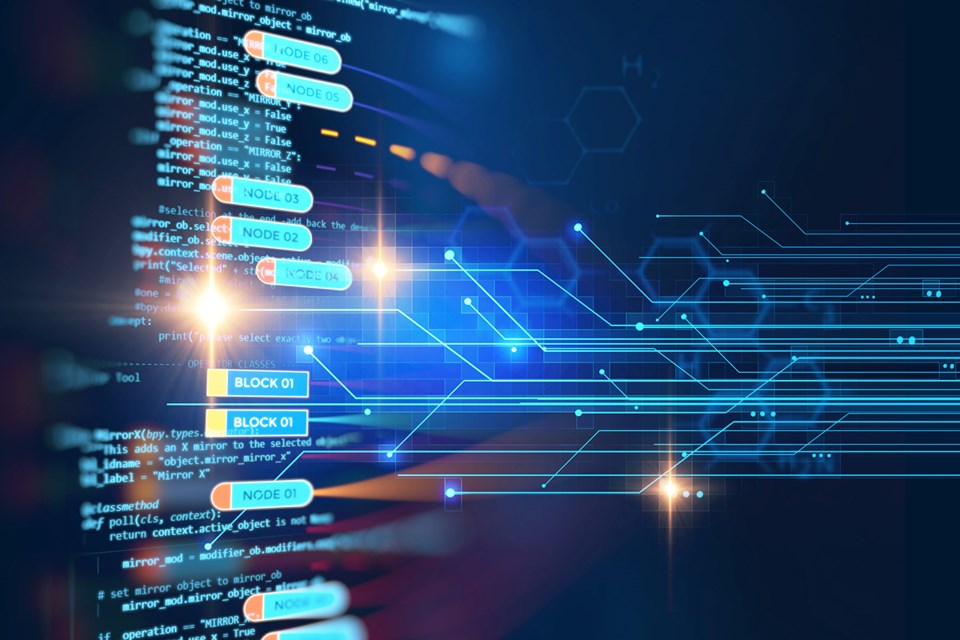 Very simply put, blockchain is a way of storing and sharing data.iStock

In the mid-1980s, I answered the phone at the small-town newspaper where I worked.

“Can you please tell me your fax number,” the caller asked.

“It’s a machine that allows me to send a document over a phone line,” he replied, a three-hour drive away. “I have a letter and you will receive a copy of the letter at your office instantaneously.”

I was about to accuse him of trying to pull the wool over my eyes when I paused. Something in his voice sounded genuine. “You can't really do that, can you,” I asked, incredulous.

If I were to travel back 100 years in a time machine, my explanation of how a facsimile machine worked would just about be the same. "There’s this thing called the telephone. It transmits your voice over a wire. A person who lives hours away can hear you speak. And then they invented a way to send words and pictures over that wire, too."

On Thursday afternoon, I thought of that 30-year-old phone conversation as I sat in the audience of Vancity Theatre to listen to Business in Vancouver’s panel discussion on “Understanding Blockchain.”

“We don’t’ think any more about the internet works,” said panellist Kelly Samuels, a partner in the EKB law firm in Vancouver. “It’s just there and we use it. Twenty years from now it will be the same with blockchains. Right now it is all so new and we’re trying to find our way. But down the road it will just be, and that’s pretty cool.”

Another panelist, Greg Johnston, the CEO and director of Carl Data Solutions, had an anecdote like my fax machine story. Years ago he was at a conference of people in the travel industry who were being told they should be creating this thing called a website because the internet was about to change the way we do business. “How do we stop it,” a fellow attendee asked.

“Blockchain is here; it exists and it’s a proven technology,” Johnston told the capacity crowd. “Where it goes really depends on the companies that are now well funded and coming up with creative ways of using the technology.”

In six months, Brian Beveridge, a partner with MNP’s Technology Solutions, thinks we won’t even need to even bother with an explanation of blockchain. Everyone will have at least a rudimentary understanding of what it is.

Until then, however, here’s his description: Blockchain is a “distributed ledger technology network that supports information stored in ledger-like format that people can easily view.”

Event sponsor Shayne Nyquwest of Mackie Research Capital put it this way: “By allowing digital information to be distributed but not copied, blockchain has created the backbone of a new type of internet.”

And I like this explanation I found in a BIV story by Silvain Charlebois: "Blockchain is a way of storing and sharing information across a network of users in an open virtual space. The technology allows users to look at all transactions simultaneously and in real time."

Beveridge was almost giddy about the potential of Canada’s potential of being the physical home to the blockchain revolution. Why? Because we’re such a cold country. Cold — as in temperature.

One type of information that’s stored in blockchain is digital, or crypto, currency such as bitcoin. Storing and protecting that information requires massive amounts of server space.

“You’ll see 10,000 to 20,000 servers running for a bitcoin operation,” he said. Those servers generate heat and it takes a lot of air-conditioning to keep them from over-heating. But not in Canada, where there are lots of naturally cold places.

Those servers also require lots of electricity, which is why they tend to be within hundreds of metres of a hydro dam or substation, Beveridge said.

“It sounds like we finally found a use for Site C,” quipped moderator Kirk LaPointe, Site C being the $10 billion massive dam being built near Fort St. John in (cold) northern British Columbia.

Not every business is a suitable user of blockchain, said Samuels, who sees its advantages and dangers.

“The opportunities are largely in the financial transaction sector," she said, and while the healthcare industry would also benefit from the techology, given the privacy isues, “there’s a serious need for records to be moved around seamlessly in an encrypted fashion.”

“What I love and what I see is a distributed data economy,” said Johnston. “We collect billions of pieces of data and serve it up so people can make smart decisions…. I like idea of micro transactions. That just seems like a better way for us to work. We can expand upon it, make better models to give better insight into information.”

A fourth speaker was Christine Duhaime, the founder and CEO of the Digital Finance Institute. She provided fascinating insights into the roughly 1,300 types of crypto-currency currently available. “Fifty per cent are pure hype and people will go to jail [once uncovered]. There are already too many and we’ll see some of them dying off,” she said.

Business in Vancouver has written extensively about blockchain and digital currencies. Here are links to some of their stories for those who want more of an explanation than “There’s this thing called the internet and….”