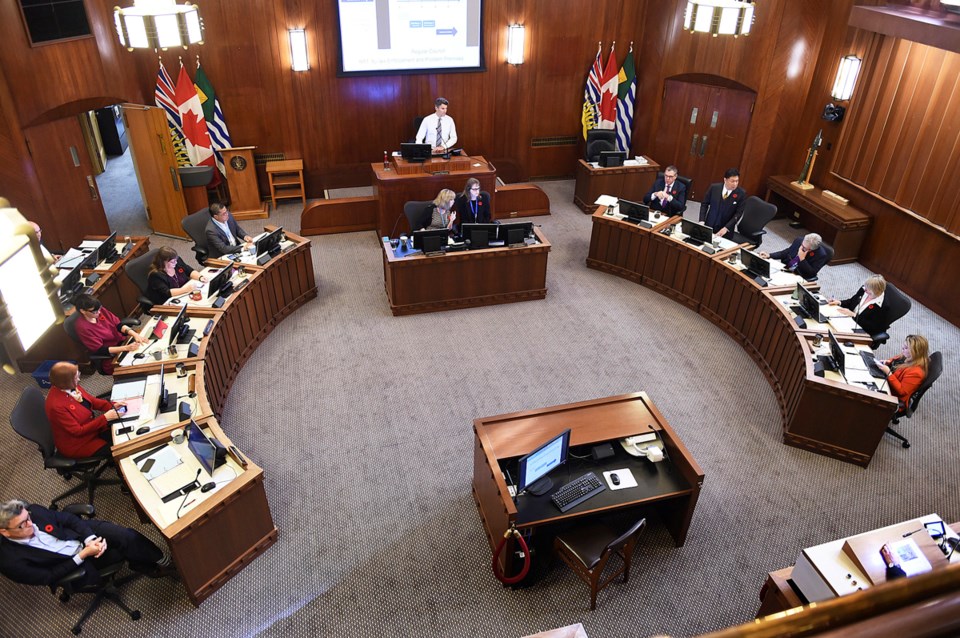 Vancouver city councillors got a huge boost in pay last year but still earn less than their counterparts in Winnipeg and Ottawa. Photo Dan Toulgoet

For what seems like an eternity, I’ve been diligent about reporting how much your mayor and city council rake in each year for doing the work they do.

I’ll give you the latest dollar amounts in a few sentences.

First, as you are keenly aware, some councillors work harder than others, but don’t necessarily take home more money.

That excludes councillors such as Vision’s Raymond Louie, who also doubles as vice-chairperson of Metro Vancouver. He earned $35,929 in 2015 for doing that job, according to Metro’s 2015 remuneration report. That same year, Vision Coun. Heather Deal collected an extra $24,053 as chairperson of the Metro Vancouver Regional Parks Committee.

What the rest of the Vancouver crew earned as Metro directors in 2015 is only a Google search away. The 2016 version of Metro’s report is expected to be released in May.

Until then, let's take a look at city council’s 2016 remuneration report, which goes before council today.

For the first time since I can remember, all councillors except for Vision’s Andrea Reimer ($97,543) pulled in more than $100,000 in a single year. Not too shabby. Deal topped out at $135,780 (that includes extra pay as deputy mayor) and Louie was runner-up at $119,896 (that includes extra pay as acting mayor). Add those six figures to their Metro income, and that's some decent do re mi.

The other seven councillors – the NPA’s George Affleck, Elizabeth Ball and Melissa De Genova and Vision’s Tim Stevenson, Geoff Meggs, Kerry Jang and the Green Party’s Adriane Carr – all took in $103,000 in 2016.

Mayor Gregor Robertson cashed out at $166,628. His local expenses, travel and conference costs totalled $34,226. Then there’s his so-called "discretionary" budget. The mayor spent a whopping $783,090 out of his allotted $1 million. So what the heck did he spend all that cash on?

At deadline, I was still trying to determine that after examining the mayor's expenses for 2016 on the city website. It's very tedious work to go through item after item. So I got in touch with a staffer in the mayor's office, who sent me a better visual of the breakdown of expenses. That document, or table, says the mayor actually spent $985,273 in 2016.

I put all those categories in quotes because I didn't get a chance to have someone from city hall give me examples or more detail. Anyway, you get the picture — the mayor spends a big chunk of cash on staff dedicated to the Vision Vancouver agenda.

But enough about the mayor, how is it that all but one city councillor joined the 100K club?

Regular readers will recall a piece I wrote in this space back in March 2016 when the mayor and his councillors decided to give themselves a raise. As I wrote back then, council approved a pay increase of $8,968 last year to top up their annual salaries to $80,029.

Councillors also decided that another "one-time payment" of $8,968 should cover their past year on the job in 2016. They were also to collect another $3,048 every year to cover extended health benefits they don't receive. Then there was the additional $6,000 to hire a person or people to help them with their workload.

Anyway, that was last year.

That's some pretty decent dough for all 11 of your elected officials.

I know some of the usual complainers in this town will say that kind of pay is outrageous.

I say to that: Really?

A city councillor in Winnipeg earns $89,346 per year while an Ottawa councillor collects $93,999. While every city has its problems, I can think of a few in Vancouver — an unprecedented overdose drug crisis and record-setting homelessness — that no other councillor in the country would want to touch.

That said, after being a dedicated council watcher for what seems like an eternity, I can say that not every politician at city hall always earns their keep, or brings value to an argument.

I'm not going to name names.

Grab a piece of paper, write down each councillor's name. Next to it, write at least one good idea or policy that he or she has introduced that could have made or made a noticeable difference in this city. Not the party, the person. If you get stumped, then you'll have your answer or answers to what will become an $82,000-a year question in next year's civic election.