Vancouver is vanishing at an incredible clip 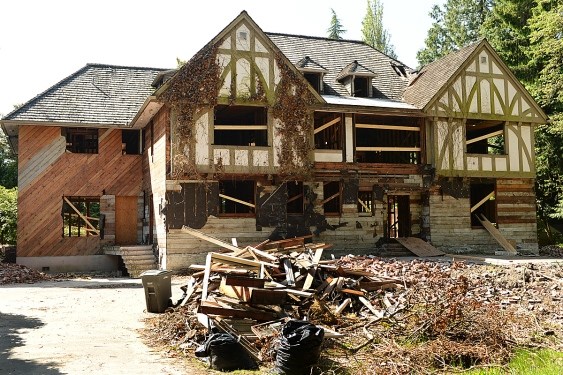 Perfectly good houses are being demolished in Vancouver, according to Caroline Adderson. Photo Dan Toulgoet

Vancouver Vanishes: It began as a passionate project by one woman, Caroline Adderson. It was a Facebook page contributed to by many and driven by her concern over the unprecedented wave of residential demolitions in her neighbourhood on Vancouver’s West Side.

They were demolitions, as Adderson pointed out, that were in many cases the destruction of perfectly good houses built between the two World Wars and made of quality materials that were ending up as land fill.

Well that Facebook page has now led to a coffee table-sized book, an Anvil Press publication hitting bookstores next week.

It includes a series of essays, “Narratives of demolition and revival,” which are sometimes analytical, providing historical context, and other times deeply personal. The authors include a number of Vancouver historians, journalists, homeowners and one poet — Evelyn Lau.  And it comes complete with photos — before and after — of some of the more notable vanishing species; the results of the 10,000 demolition permits the city has issued since 2004.

In all, it provides a most useful contribution to the increasingly anxiety-ridden conversation that continues to grip this town over the subject of housing; that essential human need that is proving increasingly elusive for many of us who grew up here thinking it was simply a given: My grandparents had a place to live they could afford to own or rent, as did my parents, and so should I.

As civic historian John Atkin notes in the opening piece: “Cities grow through demolition. It is part of the process of constant development and renewal. For Vancouver, that process of demolition and rebuilding has been going on since the first non-native settlement occurred on Burrard Inlet in the 1860s.”

But that constant development and renewal, until fairly recently, did not change the class or diversity of people who could afford to live in the city. Indeed, looking at the records of who owned and lived in that generation of now demolished houses, there were service workers, tradespeople, teachers, cops, managers and the wealthy.

That has changed and continues to change dramatically although our governments have a distinct inability or desire to quantify that change or do anything about it.

The City of Vancouver’s efforts under Vision Mayor Gregor Robertson — except for recently stopping demolitions in the wealthy historic enclave of First Shaughnessy — have been pathetically ineffective.

When urban planner Andy Yan published a piece of research earlier this month that confirms two-thirds of the high-end sales of homes on the West Side went to people with non-anglicized Chinese names, it was the first solid data of any sort to confirm what real estate agents and neighbours have known for years.

People looking for safe havens for their cash are making a meal of our real estate, driving up prices and too often leaving properties empty while they increase in value.

As Yan points out, this is not about race, it is about money. And right now, in this market that money is mostly coming from Mainland China.

Yan’s research, as small as the sample was (172 sales on the West Side), helps explain why Vancouver is vanishing at the incredible clip that it is and what is replacing it.

In her essay in the book, one of the most dogged followers of this phenomenon, Globe and Mail contributor Kerry Gold observes this about First Shaughnessy before the recent ban on demolitions: “Fifty-one heritage beauties have been demolished in First Shaughnessy since 1982. All of them have been replaced with bland monster mansions, designed to resemble historical architecture, but with an emphasis on size over design. They are pastel-painted Disneyland versions of grandness without an ounce of nuance.”

But many neighborhoods are suffering the same changes as modest homes are being replaced by monster houses and mature trees and well established gardens being removed to make space for Vancouver’s planners’ demands for double garages.

Other jurisdictions, other countries, other political leaders do more than wring their hands or mutter about racism in the face of foreign investment and housing speculation.

But here in this country, in this province, in this city, we appear to do nothing as Vancouver Vanishes.