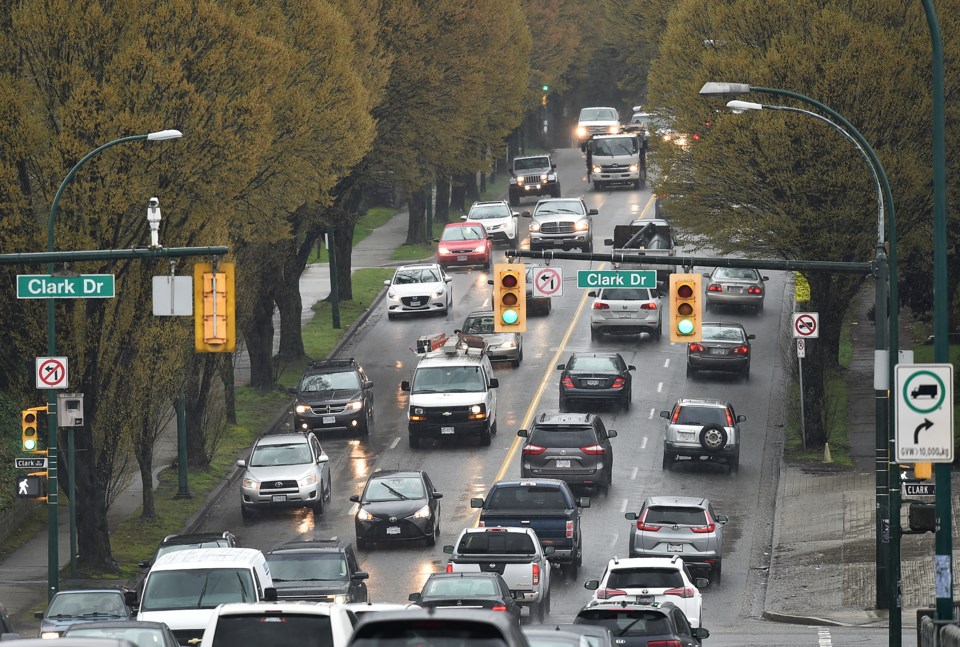 Hands up all those people who dream of a day where you can ride a public transit bus along East First Avenue.

Wow, I see there are a lot of you.

Well, I’m happy to report the City of Vancouver is on the case.

In fact, the city has been on the case since 2005 when the Vancouver-University of B.C. Transit Area Plan identified the need for transit service on the East First Avenue corridor.

So what’s the hold-up?

In short, there’s a ton of planning to do.

First, I want to tell you why I’m writing about this now (other than the fact that I’ve driven East First Avenue for decades and it’s become incredibly congested with vehicles, many with only the driver inside).

About a month ago, during council debate over calming Prior Street in Strathcona to traffic, there was some broader discussion about bus routes in Vancouver.

East Hastings and Broadway were mentioned.

That’s when Lon LaClaire, the city’s transportation director, informed council that staff recently submitted some info to TransLink about getting bus service on East First Avenue.

I followed up and learned staff’s submission was in regards to TransLink’s Transport 2050 plan, which is in the planning stages and involves the agency collecting feedback from the public and municipal governments.

Some of the key points in the submission, as outlined by the city’s communications staff, were obvious: bus service along East First Avenue would fill a transit network gap and connect riders in Burnaby to downtown, and vice-versa.

Staff’s submission also made it clear that any future bus service along East First Avenue should incorporate zero emission buses, which would keep in line with the city’s so-called climate emergency response goals.

I wanted to hear more about staff’s interest, so I spoke to Dale Bracewell, the city’s manager of transportation planning, who cautioned that the submission was simply that — a submission.

And, he added, that if and when service comes to East First, there will be a whole other level of discussion locally before the first bus rolls along the strip.

“[TransLink] told us this was an opportunity to download all of our policy and programs and ideas of the past, so that’s certainly what we wanted to do here for East First Avenue,” he said.

“This is really important to fill a [bus] network gap.”

For those of you familiar with East First Avenue, you’ve probably got a couple of questions.

Like: How would a bus stay on schedule with the congestion?

And: How much construction would be needed to build bus pull-outs or insets along the road to accommodate bus stops?

And, as expected, they won’t come with definitive answers until TransLink finalizes its 2050 plan. But Bracewell was good enough to look down the road at what may or may not be possible.

On bus stop insets, or leaving the road the way it is:

“We would look at both options, to be honest. But it’s not that we would definitely try and expand the road to deal with those bus stops. Depending on which option is preferred, there could be some capital [investment], or it could be fairly easy to introduce.”

On making the buses run on time: “You recognize obviously the challenge. However, TransLink does their scheduling based on time of day, amount of vehicle travel time and congestion, and they’re always adjusting that.”

Which brings me to TransLink, which didn’t have much to add, except to confirm they received the City of Vancouver’s submission for the Transport 2050 plan.

“We are reviewing and assessing all Transport 2050 idea submissions from the first phase of engagement over the coming months,” said Dan Mountain, a TransLink media relations staffer, in an email.

“The next phase of engagement for Transport 2050 is in the spring, where the public will be asked to consider trade-offs based on different transportation packages of projects, services and policies.”

Until then, enjoy the agonizing drive/crawl/horn-honking parade along East First Avenue.