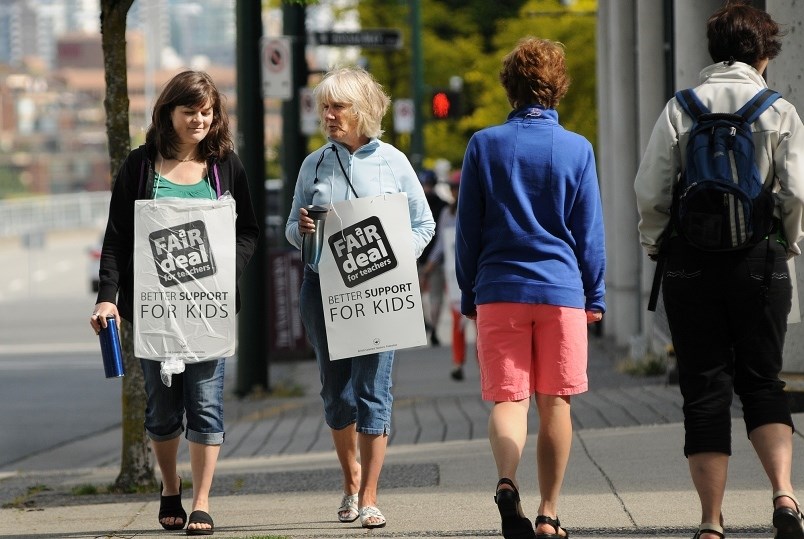 The B.C. Teachers’ Federation and its employer are in mediation over their expired contract, with several dates set for the last two weeks of August in hopes of avoiding a strike. File photo Dan Toulgoet

It may be the dog days of summer, but the first day of school will be here before we know it.

Behind-the-scenes action is underway to try to make sure the educational magic happens come September, including mediation for the teachers’ contract, calls for more funding and talk about better supports for students with special needs.

It took a full year, but the Vancouver School Board finally came out with a so-called needs budget, which shows it needs another $26 million to best support students.

The needs budget, filed in June, is based on the themes of equity and advocacy — basically what’s needed to ensure student success. The extra $26 million would hire back positions that have been cut over the past decade of austerity, such as district youth family workers, peer-to-peer support teachers, multicultural workers and substance use prevention workers.

The needs budget would reinstate the band and strings program in elementary schools, provide library and other expense budgets to schools and reduce psychologist assessment wait times.

The recommendations were created by teachers, principals and vice principals, support workers and others, who were charged with recognizing that schools, students and the curriculum have significantly changed over time.

“Some examples of that change include student vulnerability; increase in the number of students with special needs; the proliferation of technology; increasing deferred maintenance; food programs; economic factors; and staffing reductions,” the document says.

Of the VSB’s total $505-million budget, $26 million is five per cent — not exactly small change.

Meanwhile, education was one of the top priorities for people surveyed by the province’s Select Standing Committee on Finance and Government Services, which just released its report for next year’s budget. The top concern was a need for more public funding, while a lack of funding for students with special needs also a key concern.

First Call: B.C. Child and Youth Advocacy Coalition said in their submission the education system has been underfunded for the past two decades, which has hit students with special needs particularly hard, sometimes the point where they are sent home because the school doesn’t have the resources to meet their needs.

“Supplemental special education grants to B.C.’s school districts represent on average just 58 per cent of what they spend on special education,” First Call said in its submission. “This has left more parents scrambling to find the learning supports their children need.”

First Call also asked that the government develop a universal social safety net to support the 1,000 youth who age out of foster care each year, noting more than half of those youth go onto income assistance within six months and that the 2018 Youth Homelessness Count found half of homeless youth were in care.

“Clearly we are failing in our role as parents for these youth by allowing this extreme situation to exist,” First Call said.

The budget committee said supporting youth who age of care is “critical” and “strongly agreed” that an existing support program “needs to be significantly improved.”

In the end, the committee did not make a recommendation to boost education funding, citing the collective bargaining negotiations. Instead, they urged the government to press on with seismic upgrades and reconciliation. In its submission, the VSB pushed for improvements for Indigenous students, noting their graduation rate, while improving, is still too low.

While those are commendable recommendations, steering clear of the funding debate seems disingenuous, even with contract negotiations underway.

The B.C. Teachers’ Federation and its employer are in mediation over their expired contract, with several dates set for the last two weeks of August, the BCTF says. But, last we heard, the two sides are far apart on the issue of how best to educate special needs students and what the optimum number of students in a classroom is.

In the first set of negotiations since teachers won back the right to bargain on class size and composition in 2016, both sides want uniformity across the province, but the BCTF wants robust levels found in school districts like Vancouver to be implemented across B.C. and the province wants universal rules at lower levels.

Teachers say that would amount to concessions in districts like Vancouver, calling the proposal “jaw-droppingly shocking.” The employer responded, saying the teachers’ proposal is "completely unrealistic."

Moving towards provincial rules seems logical, but teachers in Vancouver and Surrey are unlikely to vote for a contract that means cuts in their schools. Reaching a deal may mean grandfathering in richer contracts where they exist, while creating new minimums in districts that don’t have any.

Let’s hope an agreement is reached before Labour Day.