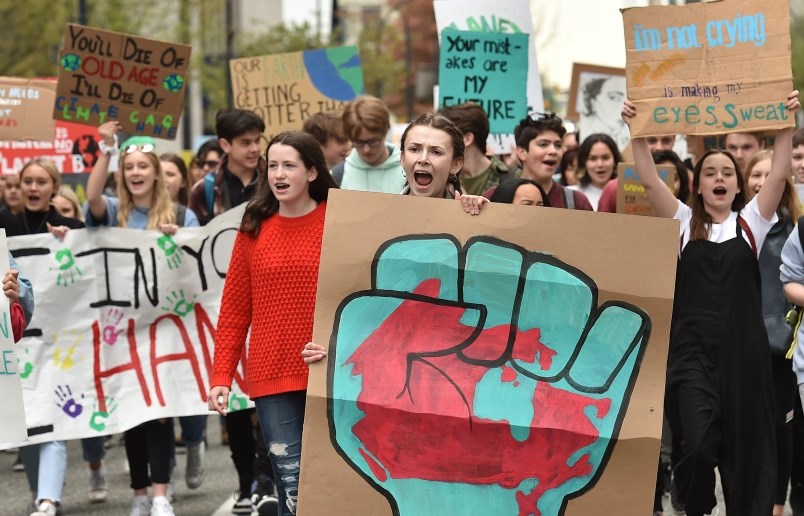 Hundreds of students from across the Lower Mainland took to the streets of downtown Vancouver May 3, marching for action on climate change as part of the Climate Strike movement. Photo Dan Toulgoet

Sweden’s Greta Thunberg is an inspiration — one that has galvanized school kids half a world away in Vancouver.

Last year, when she was just 15, Thunberg began a solitary school strike for the climate. Today, the teenager, who openly talks about living with Asperger’s Syndrome, gives speeches to world leaders and is the face of a massive, global movement of young people.

"If you regularly fly around the world, eat meat and dairy, and are living a high-carbon lifestyle, that means you have used up countless people's remaining carbon budgets,” she told the Brilliant Minds conference in Stockholm in June, a Youtube video shows. "Everyone and everything needs to change… The bigger your carbon footprint, the bigger your moral duty. To make the change required, we need role models and leaders — people like you.”

Thunberg’s words resonated with Vancouver student Rebecca Hamilton, 17, who just finished Grade 11 at Lord Byng secondary. She’s now the Vancouver representative for Climate Strike Canada and Sustainabiliteens — a group of local young people who demand action on the climate crisis by striking from school one Friday each month.

“Growing up in the 21st century, I’ve always been aware of climate change — there has always been this dark cloud sitting on the horizon of my future,” Hamilton said in an interview. “Nothing else really matters if our planet is destroyed and can’t support life.”

Hamilton, who was born in 2002, says Climate Strike Canada and Sustainabiliteens participate in school strikes one Friday a month and have another goal of building a community of young people who care about climate change.

Earlier this year, both the City of Vancouver and the federal government of Canada declared a climate emergency. That shows how the climate movement has changed the narrative, Hamilton says, but as a non-binding commitment it’s not strong enough for her.

“While I think it is an important signal for the government to be sending and I think it’s good, we need to see it coupled by real action,” Hamilton said. “The next day, the federal government goes around and approves the Trans Mountain pipeline, which I think is totally incompatible with climate emergency.

“We can’t continue to build infrastructure that’s going to continue to fuel this crisis for decades to come. It’s irrational. I was not impressed.”

Under the Paris Agreement, Canada is committed to reducing its greenhouse gas emissions by 30 per cent below 2005 levels by 2030. Hamilton and other members of Climate Strike Canada want to see a much larger reduction in that time frame.

“This election needs to be a referendum on climate action — it’s really crucial,” Hamilton said. “We want to make sure that the youth voice is represented and that people vote with climate action as a priority.”

She says her parents are supportive.

“This really scares me,” she said. “I think as young people, it’s really confusing and terrifying to grow up not knowing what our future will look like. They see the impact that has on my mental health and my approach to the world.”

Keep your eye on these young people. They’re determined, scared and definitely going places. In their own way, Thunberg and her followers have already changed the world. No matter what, their generation will one day run it. And if they’re successful, maybe their world will be a better place.

Hamilton says she’s in this fight for life. She plans to study Interdisciplinary Environmental Studies after she graduates next year and says although she doesn’t know what her future will hold, it will definitely involve fighting for the climate.

The climate strikers have got big plans for next year, with global action scheduled for September.

“Hopefully millions of people will be taking to the streets, because we need to really reiterate and assert how the time for procrastination is over and we can’t keep delaying,” Hamilton said. “We need massive people power to show that.”

Out of the mouths of babes. I’m quite sure nothing will stop them.