This week we received a press release announcing the new hosts of CBC’s The National — Adrienne Arsenault, Rosemary Barton, Andrew Chang and Ian Hanomansing. Without a doubt, the best part of the press release was the inclusion of two photos.
Aug 4, 2017 11:38 AM By: Kudos And Kvetches 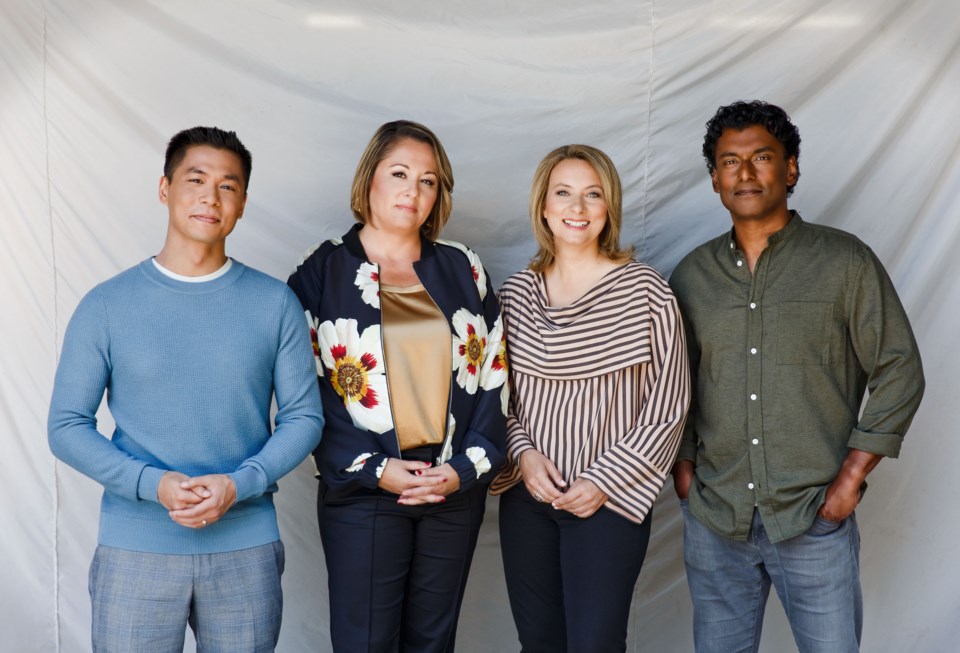 Without a doubt, the best part of the press release was the inclusion of two photos. One photo featured the four hosts dressed in their serious, news broadcaster clothing, and the other showed off the quartet dressed down in what we can only assume are their casual Friday getups.

For us, seeing a news broadcaster in casual wear is like witnessing an orca in the wild. It’s rare, majestic and weirdly off-putting. We once saw Global news anchor Chris Gailus wearing shorts and a T-shirt in Whole Foods, and we couldn’t stop staring at him from behind the kale aisle.

So what to make of The National’s new hosts in their natural habitats?

By far, Andrew Chang looks the most awkward. Perhaps it’s his choice of light blue on light blue or the glimpse of a white T-shirt peeking from underneath his weekend-dad-goes-to-brunch sweater, but we bet ordering a honey lager would be considered stepping out of his comfort zone.

Rosemary Barton really goes for it with her silky, big flower-adorned jacket and bronze blouse. Overall, we dig it, though her expression makes us think she’s disappointed in us.

We’re still not sure what’s going on with Adrienne Arsenault’s top. Is it a blouse? A backwards K-Way? Pajama bottoms worn as a shirt? Whatever it is, it looks comfortable. And god knows, after years of reporting in war zones and conducting small talk on air with Peter Mansbridge, she deserves a little comfort.

Finally, Ian Hanomansing. What can we say that hasn’t been said already. There’s a reason why his nickname is “handsome man thing.” And this windswept, linen-on-denim combo only continues to light the fire in our collective loins. The dude looks like he just finished writing a slim volume of poetry. He looks like he practises tantric sex… and not in a creepy, Sting-like way. He looks like he knows his way around a pottery wheel. He looks like he owns a tasteful collection of massage oils. He looks like the kind of guy a divorced mother dreams of meeting while taking a solo holiday in Tuscany to “find herself.”

In short, he owns his casual look in a way we can all aspire to. And for that we thank you, Ian Hanomansing.