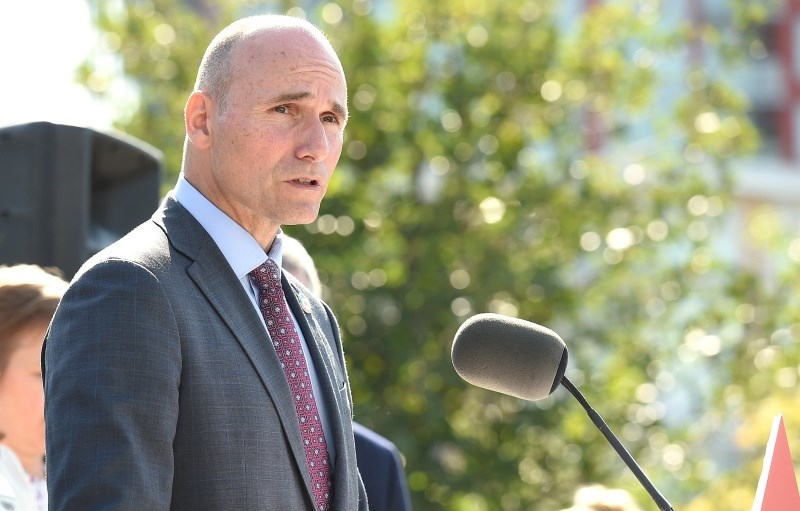 It was, as my email inbox history shows, pretty much a re-announcement of an announcement the City of Vancouver made May 4, 2018.

To be fair, the $184 million was not part of that announcement in May but seven of the nine sites announced Wednesday certainly were. So was the fact the non-profit Community Land Trust would develop the sites.

What Gregor Robertson, who was mayor at the time, told us back then was the Land Trust would build approximately 1,000 new “affordable” rental units on seven city sites.

We were told the new homes would be targeted to singles and families earning between $30,000 and $80,000 annually.

What we weren’t told is where the money would come from to build the 1,000 new homes, although it was made clear the Land Trust would “design, build, finance, operate and maintain” the sites.

Wednesday’s announcement by Jean Yves-Duclos, the federal minister responsible for housing, brought some clarity — and some confusion—on how the Land Trust would partly finance the projects; by using the word “partly” I’ve kind of shown my hand here on where my analysis is going.

First, let’s get to the clarity: the Land Trust is getting $184 million from the feds, with $114 million of that in loans and the rest in direct contributions.

In addition, another two sites have been added since Robertson’s announcement last year: 288 East Hastings (The Anjok) and a proposed temporary modular housing building at 2303-2355 Vanness Ave.

Not when the feds have already directed $53 million at one site alone — 3183 and 3245 Pierview Crescent, where Duclos made his announcement Wednesday.

What was missing from Wednesday’s announcement was how much cash the provincial government is throwing in — or has already thrown in — to get the 1,100 homes built.

It would have to be significant, perhaps even more than the $184 million committed by the feds. Again, that’s based on some simple math and the cost of building housing in Vancouver.

It’s a point I brought up with Mayor Kennedy Stewart in a telephone interview Thursday. He acknowledged the funding gap — and that it wasn’t mentioned at the news conference — but said he was confident money from the provincial government was coming.

In fact, this quote shows he’s more than confident.

“We’re just dotting the i’s and crossing the t’s, and there’ll be an announcement forthcoming in the coming weeks,” he said. “And that’ll be the final financing for all of them.”

Why the feds and the province couldn’t get together and make a joint announcement probably has something to do with one not wanting to mow the other’s lawn.

Anyway, some more confusion from Wednesday’s announcement: those two additional sites announced — one at 288 East Hastings and a proposed temporary modular housing building at 2303-2355 Vanness Ave.— are not being built by the Land Trust.

In fact the project at 288 East Hastings has already been built.

The news release from the federal government doesn’t say that, but I confirmed that detail with Len Catling, a media relations officer with the Canada Mortgage and Housing Corporation (CMHC), and a rep from B.C. Housing.

A quick Google search of 288 East Hastings brings me to a B.C. Housing site, which indicates the developer was Wall Financial. The original plan for that site was to have it split between market and non-market housing. But B.C. Housing ended up purchasing the market housing portion with some money from CMHC and turned the building into 100 per cent social housing.

The modular housing building, if approved by council, will be built by Horizon North at a cost of $3.2 million and provide 50 studio homes.

Stewart acknowledged the confusion surrounding Wednesday’s announcement and the critics dwelling on the fact the majority of the $184 million was in loans.

But, as he pointed out, the low-cost loans will do two things: activate the money sooner than later, and allow for lower rents because it allows the developer to amortize the loan over 50 years and it’s insured.

“Some folks are saying, ‘Well, you’ve already announced these 1,100 units.’ It’s like, yeah, at one rental rate. When we come back on the rental rates, it should be much lower. We just haven’t got those numbers yet.”

Thom Armstrong, executive director of the Co-op Housing Federation of B.C. and the Community Land Trust, said his agency has always said the rents will be set at no more than 30 per cent of a person or family’s annual income.

Before elaborating, he told a story about the first co-op he developed in Saskatoon in 1982. The mortgage rate then was set at more than 19 per cent, which made it difficult to build affordable housing, Armstrong said.

The low-cost loans announced Wednesday not only allow for amortization over 50 years, but lock the first 10 years in at the Pierview site at a 1.5 per cent mortgage rate.

“That is an absolute game changer for us,” he said, noting he anticipates at least 200 units across the seven sites will be rented at the $375 shelter rate.

“It means the cost of debt service on the project is so low that we can get to very significant affordability for families with gross household incomes of $60,000 in almost half of the units, without any additional subsidy from the province.”

But he was quick to point out that doesn’t leave the provincial government off the hook for more financing of the seven sites.

“What it means is that in that portfolio of seven developments, we can now redeploy some of the provincial money we thought we were going to have to use on the Pierview site and make some of those sites on Pender or Seymour — which are quite challenging in terms of their affordability profile — even more deeply affordable than they were going to be.”

Added Armstrong: “Trying to cut through the spin on the numbers is sometimes a bit tricky, but we don’t have a vested interest in spinning the numbers. We just want it to work.”

One other thing about Wednesday’s announcement: Apparently there is a federal election in October and the Liberals most certainly want your vote.

There is no confusion there.

Note: This number of units on this list have been updated since first posted. The original post had numbers from the City of Vancouver's list provided May 4, 2018. The city contacted me today to say the numbers have changed. Those are now reflected in the list.