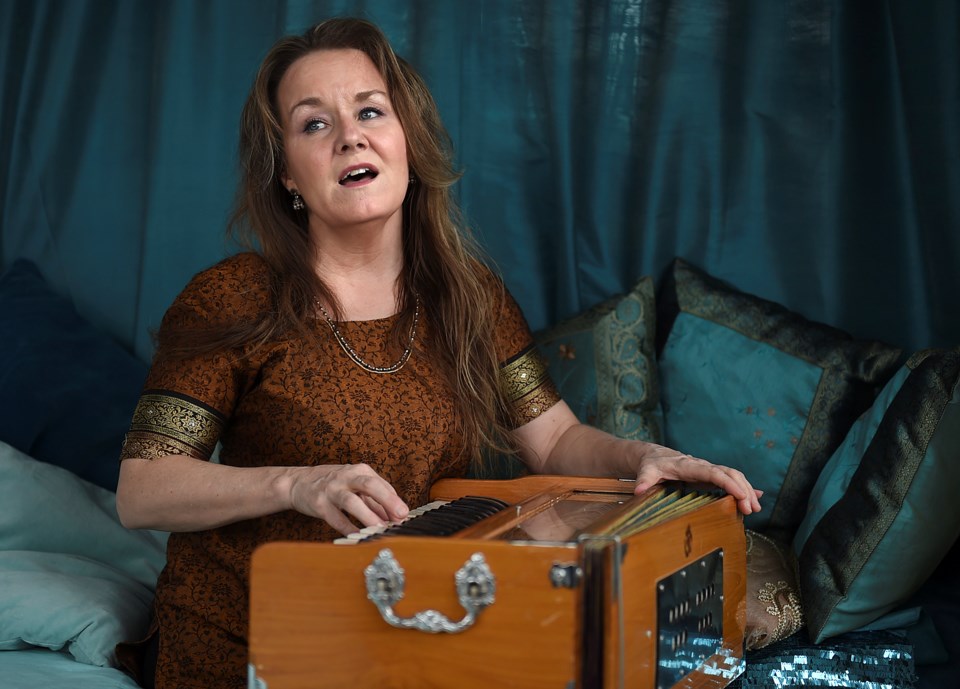 Yoga teacher Sandra Leigh conceived of her business, Give Peace a Chant, on Sept. 11, 2001. The terrorist attacks that have come to define this era made Leigh determined to provide a spiritual antidote. Photo Dan Toulgoet

Sandra Leigh notices her yoga students have become wobbly. It’s not surprising, she says. World events that seem destabilizing have an effect on individuals.

“Energy is real and where our mind goes, our energy flows,” she says. Events of the past few months, not least including the election of Donald Trump as president of the United States, are taking a toll on some people’s psyches and that can show up in places like West End yoga classes.

“You could feel the balance went off,” Leigh says. “We're still trying to get it back. You can feel it in the class.” People are wobbling when they're doing the poses are commenting on it: “Where did the balance go?”

Leigh believes that yoga — especially accompanied by chanting and other Hindu practises — can bring positivity and balance to people’s lives.

She conceived of her business, Give Peace a Chant, on Sept. 11, 2001. The terrorist attacks that have come to define this era made Leigh determined to provide a spiritual antidote.

When the Calgarian moved to Vancouver 30 years ago, she says, yoga was still comparatively rare. She took a course at the West End Community Centre and loved it as an exercise routine. She became a yoga teacher, but it was still several years before she expanded her yoga from a physical practice to a spiritual one. In her late 20s, facing a life crisis, Leigh moved to an ashram in the West Kootenays.

“That's where I initially learned about chanting,” she says. “We call it a mantra meditation, where you learn ancient mantras to help you with your state of mind while you're studying yoga, because you want to be working through your stuff.”

Plenty of West Coast folks may hear the term yoga and think “yoga mat, Lululemon, water bottle,” she says — not that there’s anything wrong with that. Yoga is a great way to keep joints limber and maintain health. Leigh has a TV show on Shaw Cable — “Yoga Moves for Every Body” — aimed especially at over-50s who want to keep flexible. But yoga’s spiritual side can add many deep layers to the exercise regimen.

At the ashram — a place of spiritual contemplation and exploration in Indian religions — Leigh discovered the multifaceted depths of the ancient practice.

“I've always been into fitness but it took on a new meaning,” she says. There, she also learned to play the harmonium, an instrument that often provides the musical accompaniment to yoga and meditation. In addition to her TV show and teaching, Leigh has albums of music and mantra. She is also the presenter at an event next week exploring Hindu spiritual practices. Part of the series “5 Ways of Engaging the Heart: Experiences in Inter-Spiritual Practices,” presented by the Anglican Diocese and St. Paul’s Anglican Church in the West End, Leigh’s session January 17 is called “Give Peace a Chant — Unity in Diversity — Peace Through Kirtan and Mantra Meditation.”

Leigh isn’t Hindu, she points out, but is enveloped in Indian culture. “Yoga is my path,” she says. “What I believe in is the evolution of the human soul.”

At the participatory presentation, Leigh will explain how bhakti yoga, the yoga of devotion, can help people physically, emotionally and spiritually.

“When an individual is doing yoga and stretching their body, keeping the pathways and the channels and the meridians free-running, and they are doing their breathing exercises, and then you add chanting to that, it just helps move energy,” she says. The chanting helps practitioners go beyond the physical.

“That's really why we chant, because it's meant to pierce through that third layer, the emotional self,” she says. “A lot of us get stuck there. So we can do physical exercise. We can even be really good breathers. But if we are not moving emotions, what will happen is emotions gets stuck, depression usually sets in. … In yoga, we believe that you have to dig up all the uncomfortable stuff because otherwise it's locked within you and that's where problems begin, that's where dis-ease begins. That's where the mind is stuck like a hamster on a wheel.”

Not only, Leigh says, are a lot of people feeling down about what is happening in the world, but because of social media and the ubiquity of news, it is almost inescapable.

“We are given no reason to feel like we live in a good world anymore,” she says. “We're just getting bombarded with it.”

At New Year’s, Leigh got together with what she calls her “tribe” and they had a kirtan, which is a call-and-response style of meditative chanting. I’ve always associated the term call-and-response with African-American churches, but Leigh explains it is among the most ancient of human forms of communication — “I howl, you howl,” she says.

The 40 or so friends who gathered made what sounds to me like their own reality — one better than the reality we see on the news.

“Something happens and it's like this portal of hope where you [think], you know what? None of that's real. This is what matters,” she says. “It's a way for us to develop the ability to focus on the good.”