Photo Twitter @VanCityPenguin Leg-in-Boot Square along the seawall in False Creek has an industrial history of forges and boat building. A new public art sculpture has been installed in honour of that past for the Vancouver Biennale.
Jul 20, 2018 11:40 AM By: Melissa Shaw 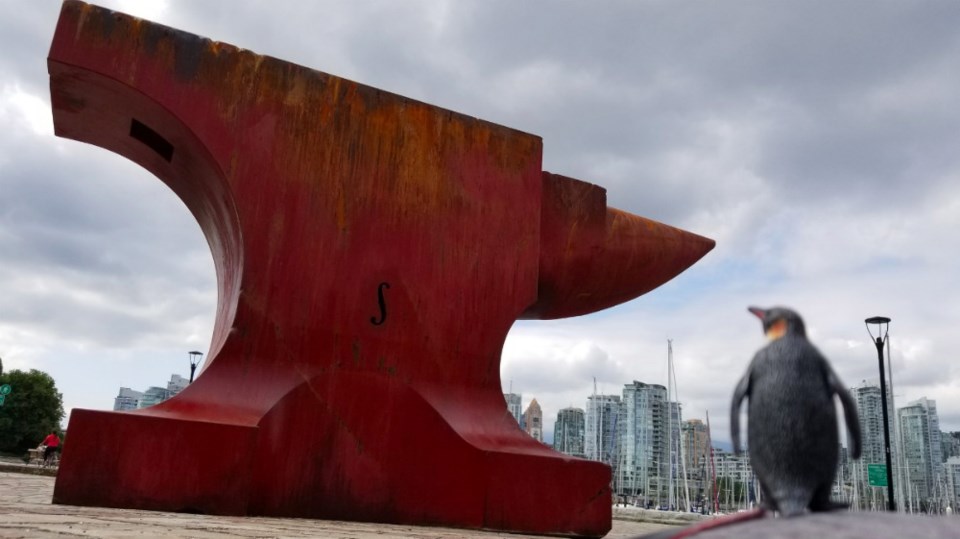 Leg-in-Boot Square along the seawall in False Creek has an industrial history of forges and boat building. A new public art sculpture has been installed in honour of that past for the Vancouver Biennale.

"My hope is to develop a work that does not simply occupy the heavy end of the spectrum, but opens a territory between weight and sound, massive permanence, and the fugitive fragility of an imagined fluid core," says Lasserre, who is now lives in Squamish.

The three-by-eight metre monolithic red anvil is emblematic of the essential forger's tool and the violin f-hole in the centre turns the tool into an instrument.

Rachel Anne Farquharson, director of the Biennale's BIG IDEAS education program says as the wind blows through the sculpture the vibration produces a soft sonorous noise. The process is similar to turning a conch shell to one's ear and invites people to come closer to the work.

The anvil is the second sculpture of this year's Vancouver Biennale after Saudi Arabia-based artist Ajlan Gharem's Paradise has Many Gates, which is now on display in Vanier Park.

The Vancouver Biennale will host a series of classic black-and-white films of the industrial era as part of its film program, CineFest LIVE. Films will be shown every Monday evening for six weeks and starts on July 31 at dusk (approximately 9 p.m.) with Women Who Run Hollywood by sister filmmaking team Clara and Julia Kuperberg.

The series runs to September 3 and includes Lotte Reiniger's The Adventures of Prince Achmed(1926), the oldest surviving animated feature film.