#ArtistAtHome is a series of portraits and profiles of local artists by Christopher Edmonstone. Read all about it and see the archive HERE . This fine gentleman is Matthew Rose, or M2 as he is known to bandmates in roots rockers The Matinee.
0
Mar 26, 2016 8:14 PM By: Christopher Edmonstone

#ArtistAtHome is a series of portraits and profiles of local artists by Christopher Edmonstone. Read all about it and see the archive HERE.

This fine gentleman is Matthew Rose, or M2 as he is known to bandmates in roots rockers The Matinee. He is a very talented guitar and banjo player. In fact, when he isn't ripping it up with The Matinee, Matt is the hired gun banjo player touring with country music star Dallas Smith. I have to say it was a whole lot easier to photograph him in his home than onstage rocking out with his hair flying everywhere!

Matt and his wife Kate just welcomed their second child Luna Rose the other week. Many congratulations to them both! On my visit with them last year, they were still adjusting to life with their firstborn so there have been some big changes in the Rose household lately. 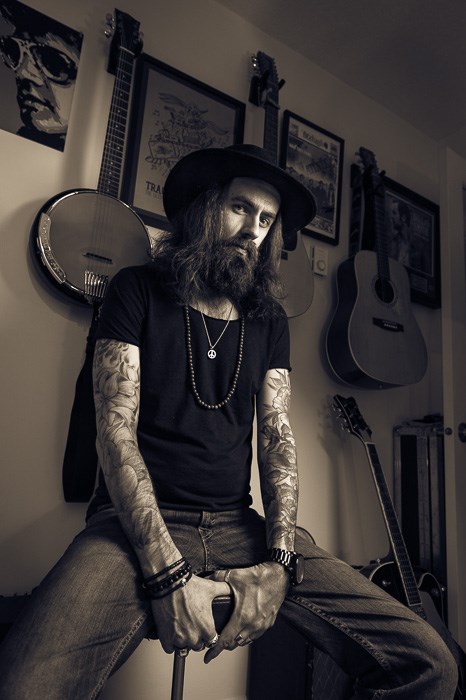 On our recent catch-up, I asked Matt about the worst thing that ever happened to him while playing a gig. He noted that he played of couple of shows while dealing with food poisoning/the flu. He had a bad case of food poisoning right before last year's Canadian Country Music Awards, and was barfing during both plane rides (overnight) from Vancouver to Nova Scotia. Anyone who has ever been ill on a plane knows it isn't pretty. He made it through the show without incident...barely. A couple of years ago, The Matinee played a show in Banff and the whole band had a stomach flu. Unfortunately, it was a losing battle, they took to the stage with buckets strategically placed for the inevitable. It was a 3 set night, so it was a long one. That was terrible, he said, 'but the show much go on!' Such is life on the road sometimes.

With no current plans to tour or record, Matt has been part of another music project for fun with members of The Matinee and The Dallas Smith band. They've come together to form Milky River - a band that plays all cover tunes. Matt says " We play the songs that we want to play. None of the standard cover band shit. A lot of B sides....and a lot of guilty pleasure songs (T-Sway, TLC, Dirty Dancing Theme Song....lol) It's good times!"

The Matinee just finished recording their latest album earlier this month, and I was fortunate to be able to sit in one afternoon to watch and listen. I got a preview of their new stuff and I can't wait for them to release it. Their latest single Temper Temper is holding strong at #4 on CBC Radio 3 Top 30, making five straight weeks in the top 10.

Many thanks to Matthew and Kate for a fine visit. Be sure to check out The Matinee website for music and show dates.